John Bell, pictured here in 2006, is the latest to write a book on Shakespeare and leadership. PC: Paul Millar/AAP.

John Bell’s new book Some Achieve Greatness is but the latest to use Shakespeare’s works to inspire and teach would-be leaders in the modern world.

In 2000 alone, two books appeared aimed at business management students: Power Plays and Shakespeare on Management. In perhaps the best of the genre, Shakespeare the Coach (2004), Australian Olympian, medical graduate, politician, and hockey coach Ric Charlesworth applies the dramatist’s words to the sporting arena and people management. Naturally, he devotes a chapter to motivational leadership, headed “Purpose and Persuasion.”

The new book from Bell, the actor and renowned theatre director, is both more and less, than these. More, because it is as much a pithy “business autobiography” as an instructional manual, from a man who has devoted his career to bringing Shakespeare to Australian audiences. Bell has not only performed most of the major characters, learning their words by heart and internalizing the subtleties and plural meanings, he has also directed the plays. He has shown business acumen in administering two successful theatre companies, co-founding Nimrod in 1970 (dedicated to producing Australian plays as well as Shakespeare’s), and of course, the Bell Shakespeare Company.

His name has become almost synonymous with the bard’s in our cultural life through this company and a series of scholarly editions of plays named after him. He also authored a substantial book titled On Shakespeare (2011), full of insights: the fruit of a practiced actor-director’s rich and detailed experience.

And, as one of Australia’s Living Treasures, Bell has cemented his reputation by “dying” hundreds of times on stage in Shakespearean roles — like Cleopatra, he “hath such a celerity in dying”.

Reflecting on his multifaceted career, Bell applies his accumulated knowledge to recount his own leadership style as it evolved through experience. Sage advice is offered, enlivened, and illustrated with pertinent quotations from speeches, which no doubt Bell can enviably recite from memory. Bell, center, as Falstaff during a dress rehearsal of Henry IV in Canberra in 2013.

The book offers lessons gleaned from Shakespeare who is seen as a natural “collaborator never a one-man band”. We find chapters on “Courage, or how to be a leader in times of crisis,” “Decisiveness, timing and tough decisions,” “Charisma, confidence and humility,” and other virtues such as integrity and humanity. These are set against dangerous managerial vices like ambition, arrogance, and entitlement.

Along the way are sprinkled inspirational quotations about leadership from the likes of Abraham Lincoln, Nelson Mandela, John F. Kennedy, and Michelle Obama, alongside cautionary reminders of a less savory, more recent American president.

However, Bell offers less than Charlesworth (my benchmark), in that the latter dwells more on applicable quotations than characters and dramatic context. This allows him to skirt the problem Bell faces: there are, in fact, no unflawed or ideal leaders in Shakespeare.

Although Bell ranges across the complete works, his major examples of good or bad leadership are surprisingly few in number. All are, to some extent flawed. Bell readily concedes this, since their failures are instructive. The figure who recurs in most detail is Henry V. For all his faults as a ruthless, likely war criminal, he seems to come closest to Bell’s ideal leader, at least in his rousing speeches. Kenneth Branagh as Henry V in the 1989 film: ruthless but with rousing speeches?

Julius Caesar and Brutus emerge as ambiguous and lacking in strategic competence. Antony for all his brilliant oratory is too much the playboy who believes in his own “celebrity”, while King Lear is easy prey for sycophants and flatterers.

Naturally enough, Richard III and Macbeth as leaders are definitely not to be emulated, though there is somehow a touch of unintended humor in the homily-like way Bell warns us against using murder as a career move:

Watching the downfall of the Macbeths we have to ask ourselves: What am I prepared to pay to make it to the top of the pile? Is the reward worth my sanity, my self-respect, my relationship, my reputation, my friendships?

Who would answer yes to such a piously phrased question? Michael Fassbinder as Macbeth in the 2015 film: not a great role model.

What about the women?

We have to wait for the final chapter before some women make an appearance, exemplifying such admirable qualities as adaptability and negotiating skills (Portia), integrity and plain-speaking honesty (Cordelia), and playfulness (Rosalind), although Bell sees their agency as qualified in a man’s world:

In the Comedies, women find a voice and authority by adopting a false male persona and using their wit, charm and female tenderness to lead the menfolk to an awareness of their follies and a better understanding of successful male/female coexistence and interdependence.

This book is very readable and can probably be devoured in a single sitting, though Bell might prefer us to take our time and savor at leisure the lessons taught. It also features witty and pertinent cartoons by Cathy Wilcox.

This article appeared in The Conversation on May 25, 2021, and has been reposted with permission. To read the original article, click here. 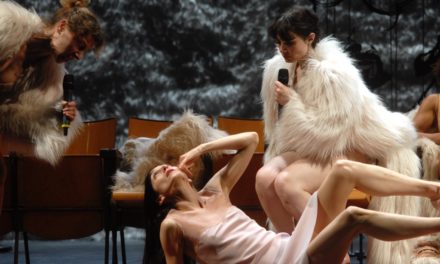 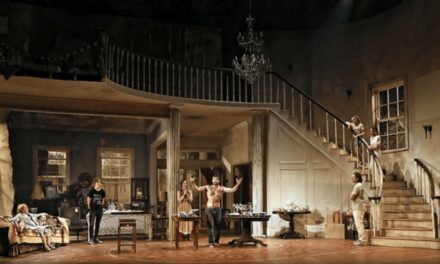