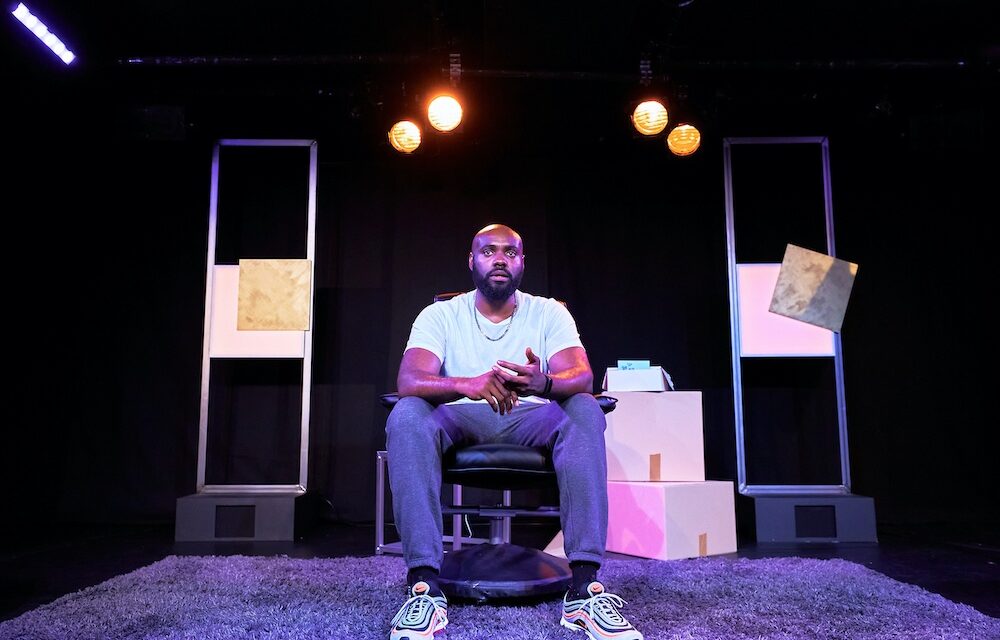 Joseph Black in "Sessions." Photo: The Other Richard.

After lockdown, the stage monologue saved British theatre. At venue after venue, cash-strapped companies put single actors into simple playing spaces to deliver good stories for audiences that just wanted to visit playhouses again. But this theatre form, which is relatively inexpensive and often immune against the pingdemic, does have its limitations. If the essence of drama is conflict between two or more characters, the absence of the other people on stage can often defuse the emotional force of the story. In Ifeyinwa Frederick’s new monologue, Sessions, which arrives at the Soho Theatre after a national tour, there is a palpable tension between the power of a subjective viewpoint and a lack of onstage protagonists.

The spotlight is on Tunde Adeyemi, who is about to turn 30, and coming up to this significant birthday he is definitely not in a good place. He’s been dumped by Rochelle, his girlfriend of more than five years; he has become phobic about going to the gym — and whenever he has a one-night stand, he bursts into tears while having sex. He is depressed; he is anxious and he feels like a failure. The fact that he has also lost his job, and is preparing to move back into the family home, likewise doesn’t help his mental health. The good news is that he is looking for help. Following Rochelle’s advice, he is seeing a therapist, and his meetings with her give this piece its title.

Although Tunde is proud of his body, and his sexual prowess (there’s a humorous passage in which he shares his list of conquests with us), he doesn’t really understand therapy. He doesn’t really get it. He’s one of those proud men, supremely confident and forceful, who loves his own body, but hasn’t really understood that therapy requires you to open up, to be honest, to share what you are feeling and thinking. Instead he approaches the process as if it is car maintenance. He wants his therapist to “fix” him. And to do it within two months, in eight sessions. Well, here’s some news for him: cognitive behavioral therapy might take a bit longer than that.

Worse still, he only talks about a fraction of the things that are bothering him. As he shares his thoughts and feelings with us, and we can see his emotions playing out in front of our eyes, the edited version that he brings to the “grey and empty” consultation room screams “masculinity in crisis.” He starts off by flirting with his therapist, and is too easily distracted by random flights of ideas. So the key relationships of his life, with Rochelle, with his father and with his sister Kay, as well as with his mother, are never deeply examined. Actually, his central tactic is evasion: he doesn’t tell his family that he has broken up with his girlfriend.

The same applies to Jag, his best buddy. Not only does he avoid his calls, but he won’t open up to him. You can understand why: while packing up his belongings ahead of moving back home, Tunde comes across a box of children’s clothes which speaks of a tragedy which he doesn’t articulate, either to us or to his therapist. So when Jag tells him that he and his partner are expecting a baby, he can barely hide his anguish. Then when his bestie asks him to be godfather, it’s like salt on a very fresh wound. The main clue to Tunde’s embattled masculinity is the attitude of his father, a successful Nigerian businessman who never cries and has little sympathy with men who express their feelings.

At several points, Tunde quotes his father, who says things such as “A weak man is no man at all.” During this 80-minute monologue, which is set either in Tunde’s apartment or during a therapy session, Joseph Black not only plays the main character with supreme and engaging confidence, but also effectively mimics his calmly speaking father, and the insistent Jag. Black’s performance is both charming and truculent, and his memories of the past, as he acts out the dance moves of his favourite playlist, are simply joyous. Although there is plenty of humor at the start of the play, with jokes about blue icing on Victoria sponge birthday cakes, the story gets increasingly intense and dark. It is a timely reminder of the importance of the issue of mental health among Black men, but also applies to all males.

As she proved with her 2018 debut The Hoes, Frederick’s writing is always perceptive and convincing, but there is not enough dramatic conflict here, and by the end, Tunde’s desperation slides into what may be complete tragedy. This is clearly staged in Philip Morris’s well-pitched production, for Paines Plough, which is designed by Anna Reid and has music by Asaf Zohar. Black’s acting is convincing, creating the necessary claustrophobia, being both moving and even occasionally frightening in its forcefulness, and the piece shows his father’s rebuffs, his own doubts about opening up to Rochelle, and his frustration at therapy and at a helpline that keeps him on hold. But the lack of a resolution makes the play sad without offering more than a glimmer of hope. Although I don’t expect playwrights to give solutions to difficult problems, this inconclusive ending just depresses me.

This article was first published by Aleks Sierz on November 11, 2021, and has been reposted with permission. To read the original article, click here. 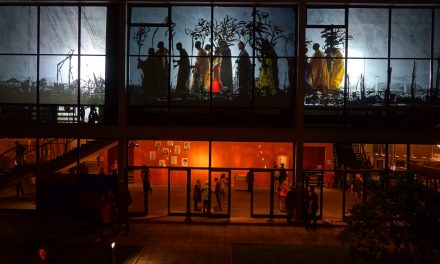 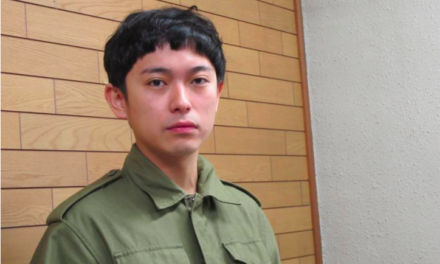