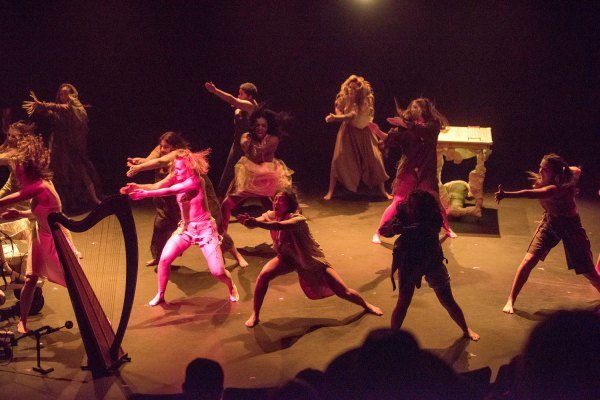 The house lights are on. A handful of female performers mull around the stage. One wears a nurse’s uniform; another, a white cotton dress; another, a pair of brown slacks and a beige shirt. They casually interact with each other and nearby audience members. Front of house personnel enter and give a standard pre-show speech. They exit. The house lights remain on. A microphone stand is placed center-stage. A character steps to the mic and introduces herself: she is Marlena, and the stage is the inside of her head. The house lights remain on. One by one, Marlena introduces the audience to the characters in her brain: Linda Kunt, a drunken social worker who plays the harp; the bartender/stage manager; who is trying to keep everything together; a smoker in a nurse’s outfit. The house lights remain on. Judith, a representation of Marlena’s counsellor, enters. Marlena tells the audience that they are about to witness a representation of the twelve minutes following the discovery of a repressed memory of Marlena being abused by her grandfather as a child. One by one, the personalities disappear behind an up-stage curtain. With the stage empty, the house lights finally dim.

The decision to begin the show by exposing rather than concealing the audience is a fitting start to 12 Minute Madness, created by Raina Von Waldenburg and presented at Vancouver’s annual rEvolver Festival. Influenced by Von Waldenburg’s work as a post-secondary physical theatre instructor, 12 Minutes is loosely structured into alternating segments of action: character interaction or monologue followed by a group scene. In these segments, the performers–mostly students and recent graduates from The University of the Fraser Valley, where Von Wanderburg currently teaches–use a combination of choreography and improvisation to advance the action. 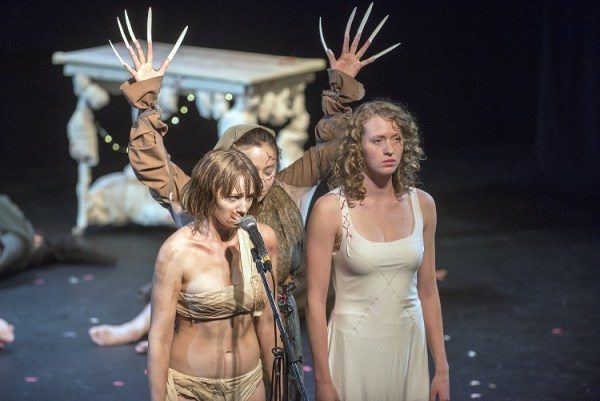 This approach facilitates strong, fully embodied, performances from it’s twelve female cast members. Kayleigh Sandomirsky, who manages to play dark humour in one breath and heartbreak in another, Maria Buganska, who makes the most of her short scene by expressing a devastating combination of rage, despair, and guilt, and Sacha Schaepe, who easily carries one of the play’s most poignant moments, all deserve special mention for their character work.

Throughout the show, the characters throw blame around like a frisbee. They are all implicated in Marlena’s grandfather’s abuse, and, as the house lights during the opening sequence remind us, through our presence in the auditorium, so is the audience. The residue of this opening implication lingers as the characters stomp, yell, cry, laugh, swear, and argue throughout the production’s forty-five-minute running time, and the sticky feeling of being a spectator/witness to the action is, undoubtedly, one of the piece’s major strengths.

At the same time, however, the show’s collaborative working process and its flexible performance structure don’t necessarily translate into a coherent final production. Some characters are underdeveloped. A strong moment is quickly overpowered by a group scene. An image or narrative thread is dropped. On one level, these formal gaps complement the subject matter: as the characters constantly remind us, the effects of sexual abuse aren’t coherent; there are no easy narratives or satisfactory answers. But, there is also a degree to which the subject matter works like a shield: because the play is about childhood, sexual abuse, and is advertised as being semi-auto-biographical, it’s hard to critique. There were images that struck me and moments that moved me, but there were also long segments of action that left me confused or frustrated. I wanted to show up for the production and the characters, but the lack of coherence made it difficult to consistently connect with either. When the house lights went up for the final time, I walked out of the theatre with the sense that the show was unfinished, and I can’t help but feel that the characters–strong, flawed, honest–wouldn’t want me to condescend to them by saying otherwise. As one of the mandates of The rEvolver Festival is to support emerging artists and new works, I hope this eclectic and candid production continues to develop and grow, so that more audiences can consider what it means to be implicated by Marlena’s story.

This article originally appeared in AltTheatre on June 11, 2018, and has been reposted with permission.