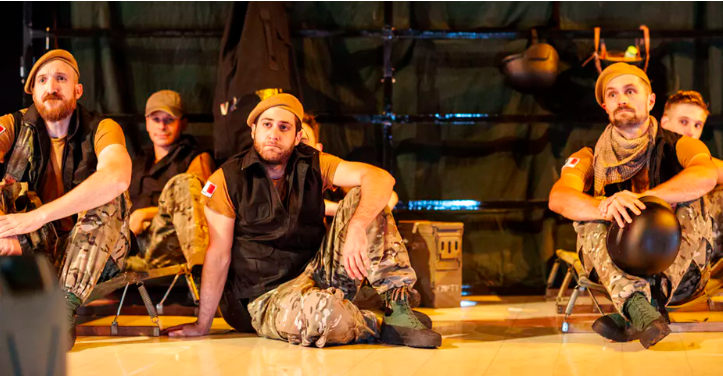 Love and war collide onstage in Sport for Jove’s production of "All’s Well That Ends Well." Seiya Taguchi/Sport for Jove

Love is a battlefield. While Pat Benatar might have made this line her own in the 1980s, Shakespeare and his contemporaries were also familiar with the trope. Analogies between wooing and hunting were rife in early modern sonnets and plays.

In Shakespeare’s All’s Well That Ends Well, love and war collide. In Sport for Jove’s current production, playing at Sydney’s Seymour Centre until April 12, Helena’s unrequited love for her social superior Bertram sends him flying into the heat of battle to avoid love.

At one point, Helena places her bare feet in a pool of blood left by a soldier Bertram has slaughtered, asking:

…is it I
That drive thee from the sportive court, where thou
Wast shot at with fair eyes, to be the mark/Of smoky muskets?

Bertram, though, a lover of Mars and a “hater of love”, is happy to be gone.

Director Damien Ryan captures this tension between romance and warfare beautifully. The play-world is a military one, and Ryan never lets us forget this. As the audience enters the theatre, Bertram (Edmund Lembke-Hogan) sits on the edge of his bed, a game console in his hands, his focus intent. The gunfire and flickering light of his game will later be actualized in the lights and noise and blood of battle in Italy. 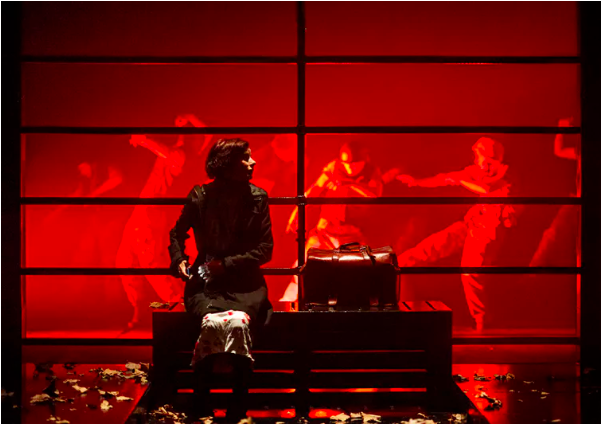 The contemporary militarised aesthetic of the play is realized superbly. An ambitious and sharp set design presents a four-poster black bed frame that converts into a combat training field and climbing frame, a steam room for the King of France and his soldiers, and later a military field hospital and camp, before, finally, returning to a bed – where sex and (a faked) death are conjoined.

The set design complements the escalating militarization of the play-world as the men move from intensive training sequences to the battlefield. Love in this play comes in the form of a “band of brothers”, the cast energetically producing an authentic sense of camaraderie which overpowers romantic love.

All’s Well That Ends Well was probably written around 1602-1605, and while technically a comedy, it has attracted the ambiguous label of a “problem play” – a rather unhelpful phrase that denotes plays we have trouble categorizing. The problematic nature of All’s Well can be attributed to Shakespeare’s blend of a folklore story with the complex verisimilitude of his characterization – fairytale and realism make for uneasy bedfellows.

Helena’s inexplicable love for the unlikeable Bertram is another central difficulty that lands the play squarely within the problematic canon.

As legendary actress Ellen Terry succinctly put it, Helena belongs to the “doormat type” of women in Shakespeare. Spurned and rejected, she – like her namesake Helena in A Midsummer Night’s Dream – advocates a desperate love:

Use me but as your spaniel: spurn me, strike me
Neglect me, lose me…

This is exacerbated in Sport for Jove’s production, where Helena (Francesca Savige) – lowly daughter of a dead and admired physician – dreamily vacuums around Bertram’s bed while her eyes dart Cupid’s arrows at her superior. 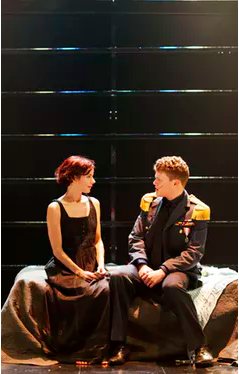 Helena and Bertram face off in All’s Well That Ends Well. Seiya Taguchi/Sport for Jove

But Bertram is busy packing for Paris; he’s off to the ailing French King (Robert Alexander) and from thence to war in Italy. Although Helena is able to cure the King (another mysterious “problem” which in this production is aligned with a mystical sexuality) and thereby win Bertram’s hand, he marries reluctantly: “I cannot love her”, he says bluntly, refusing to consummate the marriage.

Via a video message, one of the production’s uses of modern communications technology interspersed inconsistently with old-fashioned letters, Bertram promises that he will never be her husband until she can get his ring off his finger and bear him a child.

These impossible conditions are, amazingly, achieved by Helena in Italy with the help of the female staff of the field hospital (played with exceptional strength by Eloise Winestock, Teresa Jakovich and Megan Drury).

The hospital is a clever shift from Shakespeare’s play-text, where the location is a widow’s house. It serves as a base of female power and independence (also witnessed elegantly in Bertram’s mother, played by Sandra Eldridge). The hospital is one of several changes in the production where alterations and reattributions accentuate gendered conflict as well as streamline the narrative (the Clown, for example, is reimagined as a recovering double leg amputee).

Helena solves the dilemma of a reluctant husband through an ingenious bed-trick that sees Bertram accidentally consummate their marriage. Taking a leaf from Helena’s book, Sport for Jove tackle the problematic nature of All’s Well in a similar way – through physical exposure.

The company carefully advertised warnings about the play’s nudity, and I expected something akin to a glimpse of Joel Edgerton’s buttocks in Sydney Theatre Company’s A Streetcar Named Desire (2009). How wrong I was.

For a text born out of an era in which the clothes really did make the man, the removal of these identifiers of status is significant. When the King announces that he can give Helena the social status and dowry she lacks, we see the artificiality of social hierarchy. As Helena is offered any of the young noblemen in exchange for curing the king, their towels are whipped off – to the shocked and somewhat delighted laughter of the audience. Questions of status and superiority are nullified by nudity – it all comes down to flesh. This concern with fashion is best seen in George Banders’ charismatic portrayal of the braggart Parolles – “the soul of this man is his clothes”, Shakespeare reminds us.

This play will always belie its title. When Helena repeats “all’s well that ends well”, an involuntary sob escapes her. Despite falling rose petals and soft music at its close, the play unsettles more than it resolves. There is love between the women, even between soldiers. But romantic love? Like Hamlet, the play relies on seeming. As the French King says:

All yet seems well, and if it end so meet,
The bitter past, more welcome is the sweet.

Sport for Jove’s lucid and captivating interpretation exposes the depths of this problem play. There is also immediate relevancy in the slow turn from trust to suspicion of military authority, and the assertion that the ends justify the means. Every moment of this production is strategic and lovingly prepared, as hilarious as it is poignant.

This post originally appeared on The Conversation on March 31, 2014, and has been reposted with permission.