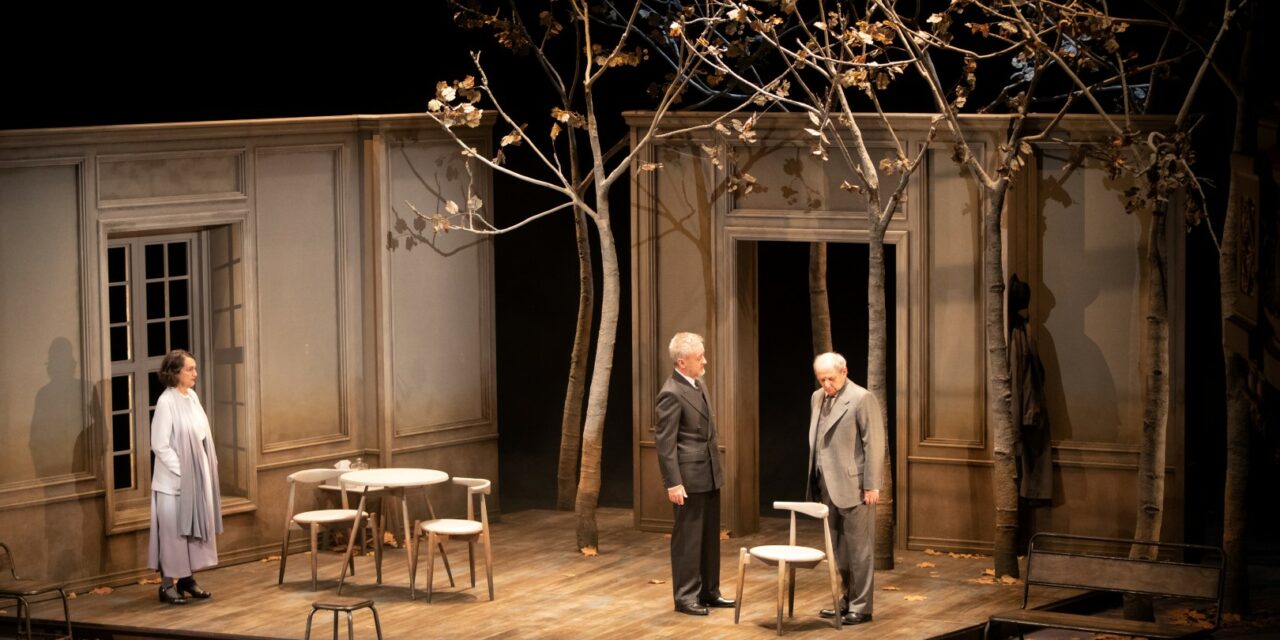 Buenos Aires director Claudio Tolcachir has good reason to call Madrid his second home. His Timbre 4 theatre company returned to the Spanish capital late in 2018 with a further run of performances of La omisión de la familia Coleman (English title: The Coleman Family’s Omission) at the Teatros del Canal. The now-legendary production has enjoyed over 2,000 performances, been seen by over 265,000 people in over 22 countries since it first premiered at the company’s fifty-seat theatre in the Boedo district of Buenos Aires in 2005. Its swansong dates in Madrid were accompanied by the Catalan-language premiere of the play in Barcelona, translated by Jordi Galceran and again directed by Tolcachir, at the Romea theatre, a venue which has hosted previous productions by the Argentine director.

At Madrid’s Teatro de la Abadía – where he returns with Próximo (English title: Next) between 3 and 15 December 2019 – Tolcachir’s staging of Michael Frayn’s Copenhagen enjoyed an extended sell-out run between 34 May and 14 July. Frayn’s 1998 play explores the rationale for physicist Werner Heisenberg’s 1941 visit to his former teacher, Niels Bohr, and Bohr’s wife Margrethe, in Nazi-occupied Copenhagen, when he was leading Germany’s nuclear program. Heisenberg had studied quantum mechanics with Bohr in 1924 before taking up a position as Germany’s youngest full professor at the University of Leipzig in 1926. The men had been close but Heisenberg’s return to Denmark at a time at a politically difficult time where Bohr’s Jewish heritage would have made him even more vulnerable clearly creates a tension between them. Frayn’s work eschews a linear logic, speculating instead on what might have been said; memory melds with dramatic motifs to create a reflection on responsibility, ethics, friendship, and speculation.

The piece takes the form of a post-mortem, with characters speaking from an afterlife that is embodied in Elisa Sanz’s ghostly grey set. Sanz provides a lean landscape of bare boards and stripped trees. The dead speak from the stage, emerging from the wooden door at the back of the sparse set where the tall windows and thin walls suggest fragility. At times, it appears to be an outdoor location, at other times the lighting points to an indoor space. A small round table functions as the site for the confrontation between the two men. Tolcachir often positions Malena Gutiérrez’s Margrethe between Emilio Gutiérrez Caba’s Bohr and Carlos Hipólito’s Heisenberg —two legendary actors—or to the side of them, almost like a choral commentator on the action. Hipólito lends Heisenberg a physical fragility. Slim and lean, his winter coat feels like a burden across his shoulders. He moves in a spectral fashion, his head down, his gait slow. Gutiérrez Caba’s Bohr is a weightier presence: stocky, solid, and appearing as if on the firmer ground—physically, morally and philosophically. There’s a passion that Gutiérrez Caba brings to the role that contrasts with Hipólito’s cooler demeanor. The men disagree from the very opening with Bohr arguing that they met in September and Heisenberg insisting it was October. It’s an indication that much is subject to variance in the world that the men inhabit.

There are numerous potential variations on what might have happened during their meeting. Tolcachir’s production refuses to prioritize one narrative over another. The repetition of certain scenes with shifts in lighting and music and slightly different pacing allows for a change in emphasis. Bohr’s reflections on responsibility are given a twist based on his later collaboration with the Allies—on fleeing Denmark, he went on to work at Los Alamos on the atomic bomb. It is never clear if Heisenberg seeks moral guidance on whether or not he should be developing the nuclear bomb or whether he came to find out about Bohr’s association with the US nuclear project, but there is a palpable tension between his evident patriotism—he identifies as a German and not a Nazi— and the requirements placed on him to develop a weapon that could cause mass annihilation. He insists to Bohr that he is not working on a bomb, but rather a reactor that will produce energy for the future. “When I went to America in 1949 a lot of physicists wouldn’t even shake my hand. Hands that had actually built the bomb wouldn’t touch mine.” Hipólito captures Heisenberg’s uncertainty with a softness that contrasts with Gutiérrez Caba’s more restless Bohr. There is something in Bohr that finds it difficult to accept his former protégé’s position, an anger that he finds hard to temper, a moral high ground that he insists on appropriating. Gutiérrez Caba imbues Bohr with a sense of entitlement but the frustration is mitigated by the pain of loss—specifically, the loss of a child by drowning—and moments of recollection of past complicities, shared discoveries, long walks, and common recreational activities.

The men’s father-son relationship moves between intimacy and antagonism—putting into action Bohr’s theory on complementarity—seeing something from two standpoints that appear to be incompatible. There are times when Heisenberg appears to crave approval from his former teacher, at other times he confronts him more forcefully. There is a mystery to his motives that remains to the production’s end. It is never made clear whether Heisenberg didn’t calculate the precise amount of the U-235 isotope needed for the nuclear chain reaction because he couldn’t or because he knew of the potential devastation that would follow if he did.

The resentment in Malena Gutiérrez’s matronly Margrethe emerges in flashes. She is both Bohr’s secretary and a minder, articulating the danger posed by Heisenberg’s appearance. There is a snappy wit to her comments—she has many of the play’s best lines—and her complicity with the audience is evidenced in the fact that the men’s scientific conversation is rendered “so Margrethe can understand.” She may be presented initially as the most trustworthy narrator but her partisan position becomes all too evident as the play proceeds. At the production’s end, the three characters are discernibly separate, looking out at a world that they have knowingly or unknowingly helped to shape. I saw the production at a time of uncertainty in Madrid—a new right-wing leader taking control of the City Council, the Socialist party leader, winner of April’s general election, unable to form a national government. Tolcachir’s production gravitates around the politics of uncertainty, reminding the audience of the mysteries that remain amidst the “accidents” and unknowables that make up how history is constituted.