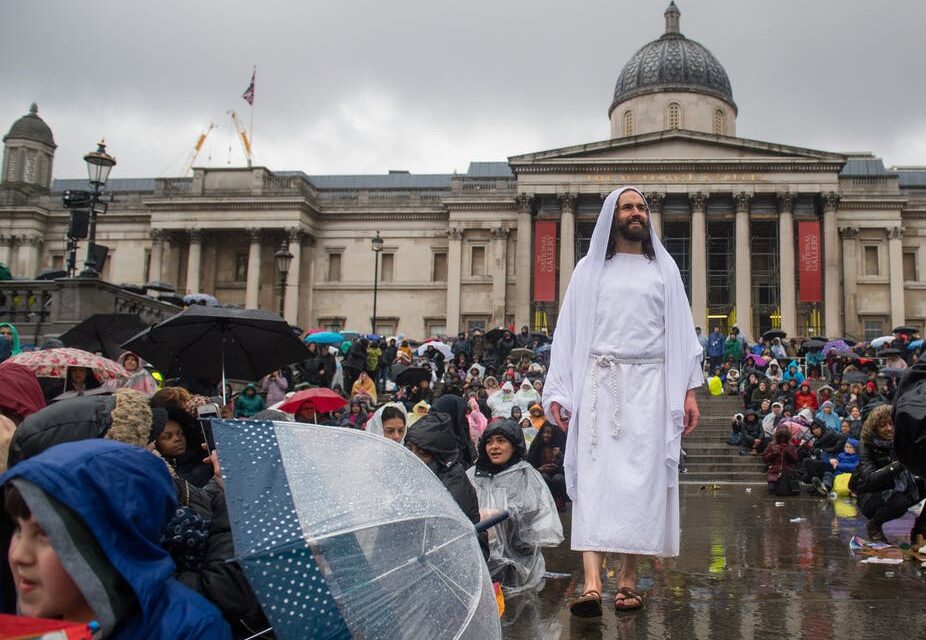 Walking in water: James Burke-Dunsmore as Jesus in the Good Friday performance of the "Passion Of Jesus," staged by the Wintershall Players, in Trafalgar Square, London, April 2018. Dominic Lipinski/PA Archive/PA Images

During Holy Week – the run-up to Easter – theatrical versions of religious narratives abound. Across the world, countless church groups present Easter plays, people join processions and stage tableaux – and since 2010, and come rain or shine, a troupe called the Wintershall Players have enacted the Passion of Christ on Good Friday in London’s Trafalgar Square.

Led by professional actor James Burke-Dunsmore, this otherwise amateur company performs in a marked-off area with the audience on all four sides, while the action is relayed in close-up on a nearby screen. The performance is also streamed live via Facebook, and last year attracted extensive commentary, including bemused internet surfers asking: “Where is this?”

Given the pouring rain, Jesus praying in Aramaic, the lions on Nelson’s Column, Pilate on horseback and emergency services sirens wailing in the background, “Where is this?” seemed a very reasonable question to pose.

But just over 100 years ago, the Wintershall Players could not have performed in the UK at all, let alone in Trafalgar Square – because representing the Holy Family dramatically was illegal. At a time when the Oberammergau Passion Play tourist trade was cranking up in Germany, staging a nativity story in a church in Britain was liable to be banned by the theatrical censor, the Lord Chamberlain.

Theatre and Christianity have often had a strange and volatile relationship. Christians have picketed theatres, called for the censorship of plays that offended them – and even attempted to ban the art form altogether.

Yet it is worth asking whether the influence of Christianity on theatre goes beyond religious plays or religious objections to them. The Passion cycle has at its center a vulnerable, suffering hero who doubts himself but resolves to persist. And the medieval mystery plays, performed for the festival of Corpus Christi (literally “the body of Christ”), show a critical development in character complexity that the Elizabethans called “personation.”

Did Christianity supply Western theatre with a significant part of its sense of inner life, of subjectivity, of character and tragic depth? This suggestion runs counter to literary critic George Steiner’s argument in The Death Of Tragedy (1961) that “tragic forms are Hellenic” and alien to what he called “the Judaic sense of the world.” For Steiner: “the Judaic spirit is vehement in its conviction that the order of the universe and of man’s estate is accessible to reason.” By contrast, the tragic protagonist “is broken by forces which can neither be fully understood nor overcome by rational prudence.”

This distinction is too sharp to fit the diverse legacy of world playwriting. In addition, Christian beliefs of “soul” imbue theatre with a different spiritual aura than that to be found in Greek tragedy, but one that is no less compelling and majestic. In fact, the passion of the Passion cycle has been one of Christianity’s most successful exports, bequeathing to drama an innovative ethical agency.

This agency is the difference between the crypto-Christian protagonist (think Hamlet, Willard White in Breaking Bad, or Paul in Simon Stephens’ Birdlands) and the gods and heroes of ancient Greece and Rome (every Marvel superhero movie you have ever seen). The former get to choose their fate rather than simply discover it. The act of choosing, the “either/or” decision, lies at heart of Christian-influenced drama. 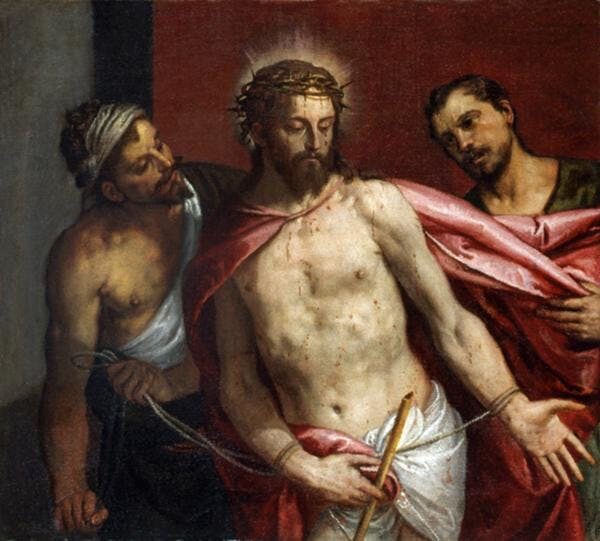 The words that Pilate uses to point to Jesus’s suffering – “Ecce Homo” (literally, “behold the man”) – offer an entry point for this idea of dramatic character. The crypto-Christian protagonists suffer, but their suffering is active, intelligent because they choose it. In short, it is purposeful and redemptive.

In England, religious drama focused around the Passion was suppressed only in the 1570s. The Coventry Mystery plays were last performed in 1579 when Shakespeare was 15 years old. His fellow Elizabethan playwright Christopher Marlowe was also 15 that year, and it seems entirely plausible that the two dramatists who did most to develop the modern sense of stage character – look at the difference between Tamburlaine, The Jew Of Malta, and Doctor Faustus – would have seen and responded to Mystery plays. Ben Jonson, born in 1572, and with a different (and flatter) sense of character psychology, probably did not.

In his History Of Civilizations, the French historian Fernand Braudel argues that the disappearance of religious conviction from the secular West in the 19th century marked the success of Christianity – its absorption into more general beliefs and feelings. As a result, it is worth reflecting on how influential the Passion cycle has been, not only in its biblical content but in its impact on the development of dramatic character.

This article appeared in The Conversation on April 18, 2019, and has been reposted with permission.

This post was written by Julian Meyrick and Elizabeth Schafer.