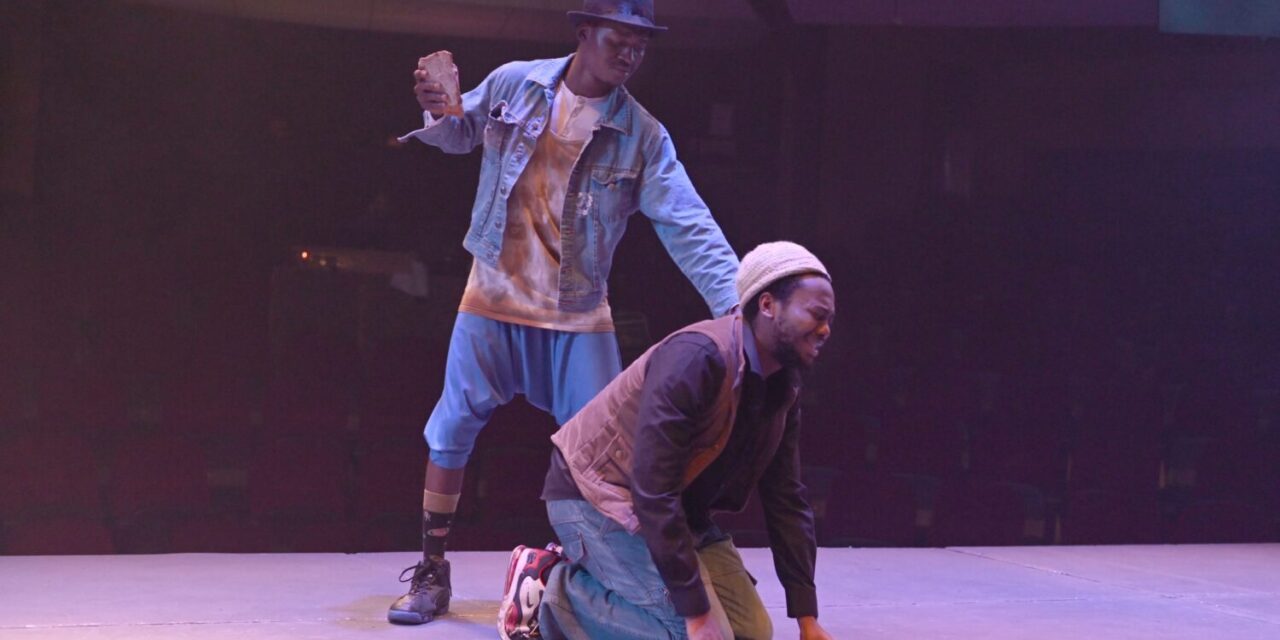 Performed as part of the Market Theatre’s annual Black History Month Celebrations, which have been supported by the US Embassy since 2016, having been initiated by Artistic Director James Ngcobo, Pass Over is the latest (Black) American production to be staged as part of this collaborative effort. In the United States of America, Black History Month is celebrated in February, and this has also been the case with this partnership, as selected productions have all been staged during this historic month.  In recent times, notable productions such as Nina Simone – Four Women, Paradise Blue and The Meeting, to name a few, have been staged and directed by James Ngcobo. Pass Over is sobering and unflinching in how it brings attention to a painfully unadulterated, real lived-Black American experience through the two characters, Moses and Kitch, who are homeless and hustle for a living on the mean streets. The title of the production, the characters, and their names are all not accidental; neither is the surrealistic style, thus the fresh and fiercely creative African-American playwright Antoinette Nwandu deserves plaudits in managing to craft a tale which is all-too-common, but still make it raw, tragic and urgent.

The play follows in the absurdist traditions best depicted in Samuel Beckett’s Waiting for Godot, and loosely references the Biblical exodus: in the character Moses, there is also multiple references to the one meant to deliver the oppressed to the ‘promised land.’ All these elements come together perfectly to create a rich and nuanced narrative which ensures that those who watch it hopefully leave the theatre with a much keener awareness of the pervasive racial injustice and inequality (if they did not already possess it) and hopefully seek to do what they can to contribute to its eradication. Pass Over is an important work because it does not romanticize the Black or African-American life, yet at the same time questions things like the validity of the American Dream vis-à-vis the well-documented racial prejudice and injustice which continue to dominate headlines. The dialogue between the two main characters (and later with Mister and the Policeman) is clever and playful, yet serious and searing – it is a production which demands that you listen and listen well (especially as the characters speak with a deep African-American accent).

When one of the characters says with a hopeless resignation that ‘the red sea does not part for (black) people like us,’ this further highlights how, through this story, the playwright sought to utilize well-known biblical narratives and intersperse them with the brutalities of life in the streets, ghettos and ‘projects,’ particularly for Black Americans who are often the permanent inhabitants of these engineered spaces. In selecting Pass Over as this year’s production, it is not only fitting due to how pertinent it is in its thematic focus on issues such as racial inequality and police brutality, and the rise and necessity of the Black Lives Matter movement (and others) and all it has done to bring focus on police brutality, the unequal justice system, racial injustice, and racial inequality. Pass Over also draws parallels between black life in South Africa, as some of what the characters go through are not uncommon realities, particularly for Black South Africans. Poverty, corruption, unemployment, and inequality are but some of challenges the country still faces over two decades after the advent of democracy.

Pass Over, written by Antoinette Nwandu and directed by James Ngcobo and featuring Kathu Ramabulana, Hungani Ndlovu, and Charlie Bouguenon, was on at the Market Theatre from 26 February – 28 March 2021.

This article was originally posted on theafricantheatremagazine.com on March 20, 2021, and has been reposted with permission. To read the original article, click here.