Michael Frayn’s “Noises Off” at the Garrick Theatre 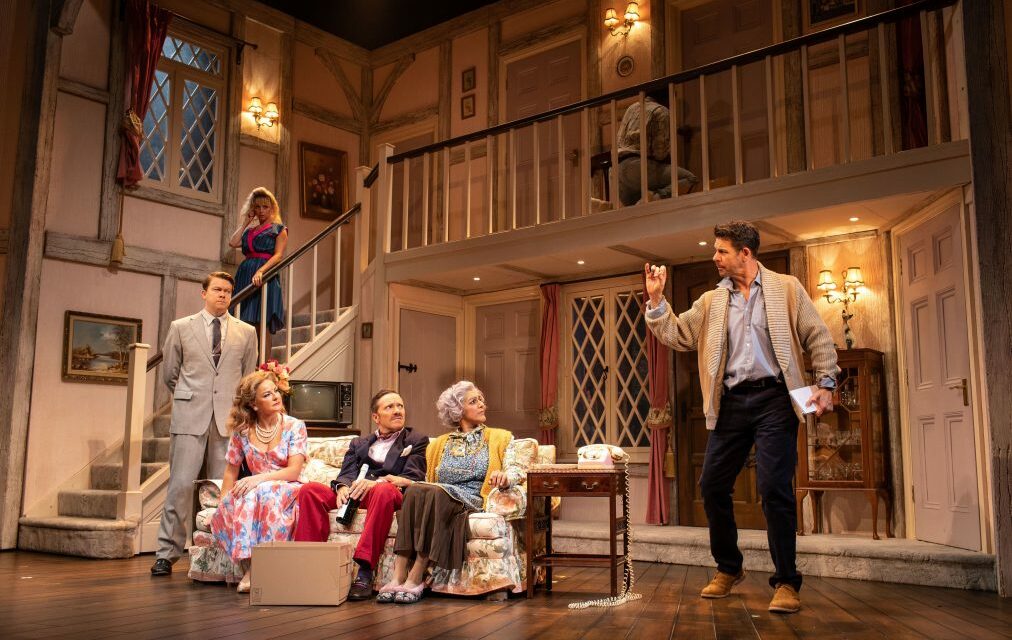 The cast of "Noises Off" at the Garrick Theatre. Photo: Helen Maybanks

One of my formative memories in the theatre dates back to twelve years ago, when I attended a superb Turkish production of Michael Frayn’s Noises Off, directed by the Arcola Theatre’s Mehmet Ergen. I still remember, with a clarity that surprises me, how sumptuously funny and satisfying I had found the whole thing, laughing convulsively until my ribs hurt. The play has stuck with me since then, haunting me with a positively mysterious force, as though it has known all along and all too well that it was partially responsible for inciting my passion for theatre.

You should not be surprised, then, by my utter joy in having gone to the Garrick Theatre for a second encounter with such bravura. Punctuated by slamming doors and hovering sardines, Frayn’s ingeniously crafted play depicts a company of amateur (?) actors trying to put on a preposterous sex farce (titled Nothing On), but only to have it derailed—indeed, trampled to death—by the farcical entanglements among themselves. Noises Off is one of those rare gems whose quick-fire maneuvers and well-modulated slapstick leave one tired of laughing. As its three acts track the distinct phases of the touring production—the technical rehearsal, a matinée performance one month later, and one of the final performances of the tour—the myriad frictions among the cast and the crew escalate into a jaw-droppingly intricate series of mishaps, both on stage and off.

Jeremy Herrin’s admirably energetic and fine-tuned production comes to the West End from its summer run at the Lyric Hammersmith, where this landmark meta-farce received its original production in 1982. Granted, almost all that is hilarious and memorable about Noises Off depends on the technical virtuoso of the cast, especially when it comes to the exacting minutiae of comic timing. Particularly in the second act, where Nothing On and its backstage action unfold simultaneously, one cannot help but wonder what the rehearsal process must have been like. Yet for all its harmonious high jinks, Herrin’s production wears its choreographic heart too much at its sleeve: impressive as they are, the actors rarely let you forget that all this has been rehearsed meticulously, repeatedly. The sense of a well-oiled machine is much in the air; it’s nearly tangible.

Which is not to say that the production does not deliver its blows. On the contrary, it is all very funny. And the whole cast is to be commended for tackling this utter beast of a comedy with unfailing control. Meera Syal as Dotty has a generally reserved demeanor, which gets pleasantly cracked at times of intensity. As everything starts to collapse left and right, Lloyd Owen’s frustrated director, Lloyd, seems determined not to make a show of his panic, but when he does, his prior restraint pays off. Richard Henders and Daniel Rigby are consistently splendid as the two men at the heart of the physical mayhem, and there is very strong support from Adrian Richards as an endlessly agile stagehand. Sarah Hadland strikes a delicate note as the nervously cheery Belinda, and Lisa McGrillis’ fragile Brooke grows rich in texture over the course of the evening.

And a special note about the program, which is truly worth its cost: full of tongue-in-cheek intellectualizations about the genre of farce and its recurrent motifs, this witty booklet also includes fake adverts and actor biographies that are as amusing as some moments in the play. It finds the best possible tone and format to provide beguiling dramaturgical insights into a play whose outrageous humor is undergirded by a deeper concern with the phenomenologies of theatre-making and theatre-going.

The sheer intelligence and unadulterated fun of Noises Off are guaranteed to leave a lasting mark on any of its viewers. Though overcooked in its near-mechanical rhythm, Herrin’s staging is a remarkable opportunity to see Frayn’s dazzling imagination in action. 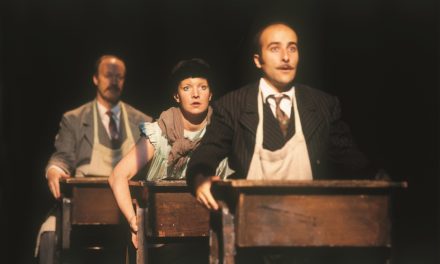