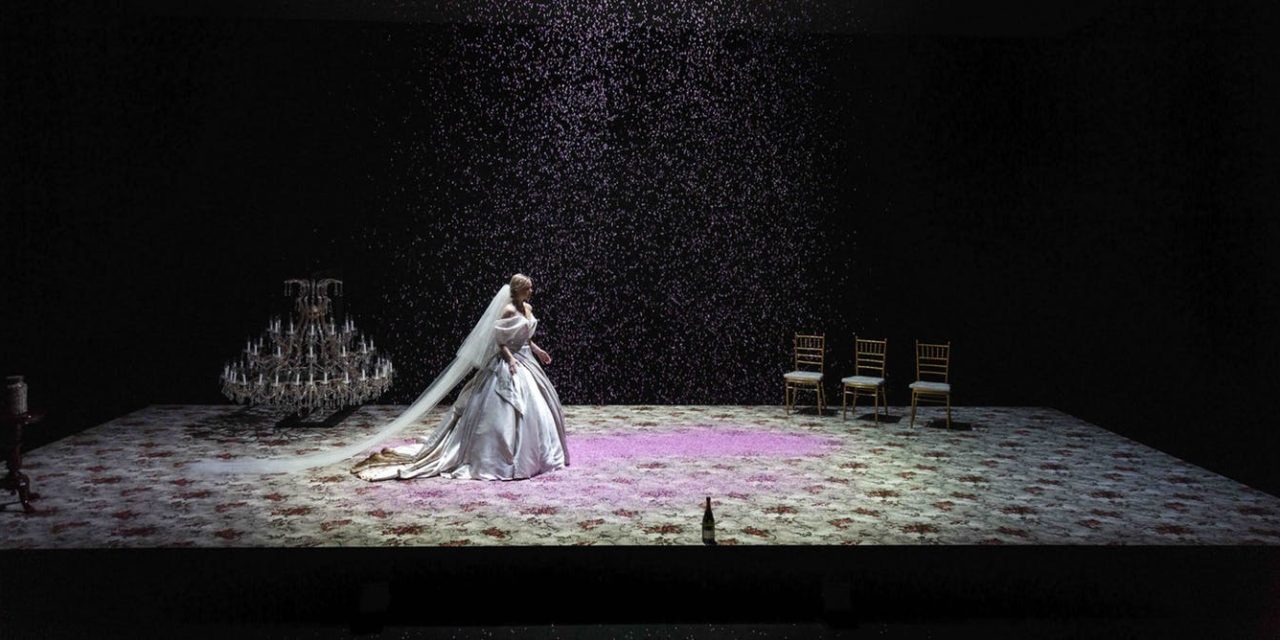 Eryn Jean Norvill as Justine in "Melancholia:" the play echoes and resonates with details of its cinematic predecessor. Photo credit: Pia Johnson

Melancholia is based on Lars von Trier’s 2011 film of the same title but has been adapted for the stage by writer Declan Greene and director Matthew Lutton. The languid stillness of the cinematic performances, especially by Charlotte Gainsbourg and Kirsten Dunst, lingers in the mind, leaving you to ponder how the film’s finely-tuned attention to lush surfaces, its lingering close-ups on faces, and slow-burn anxiety could ever be rendered theatrically.

In many respects, Greene’s adaptation is faithful to Trier’s vision and narrative, it echoes and resonates with details of its cinematic predecessor. A good adaptation allows for synergy to exist between texts, and this theatrical presentation achieves just that.

Greene artfully renders some of the film’s visual elements into theatrical dialogue and monologue, and the actors transform the writing into a stuttering feast of spoken poetry and metaphor, allowing us to glimpse the protagonist Justine’s inner thoughts and feelings of unraveling.

In these moments, Greene’s writing seems to be borne out of a tradition of “fractured-self” poetics we see in the work of playwrights such as Sarah Kane. The play, as in the film, is an intimate study of a depressive illness, melancholia–the silent actor in it–explored through the narrative of a cataclysmic planetary event. It seems to be asking, is melancholia an internal psychic phenomenon, or is it embedded in the very laws that govern the physical world? 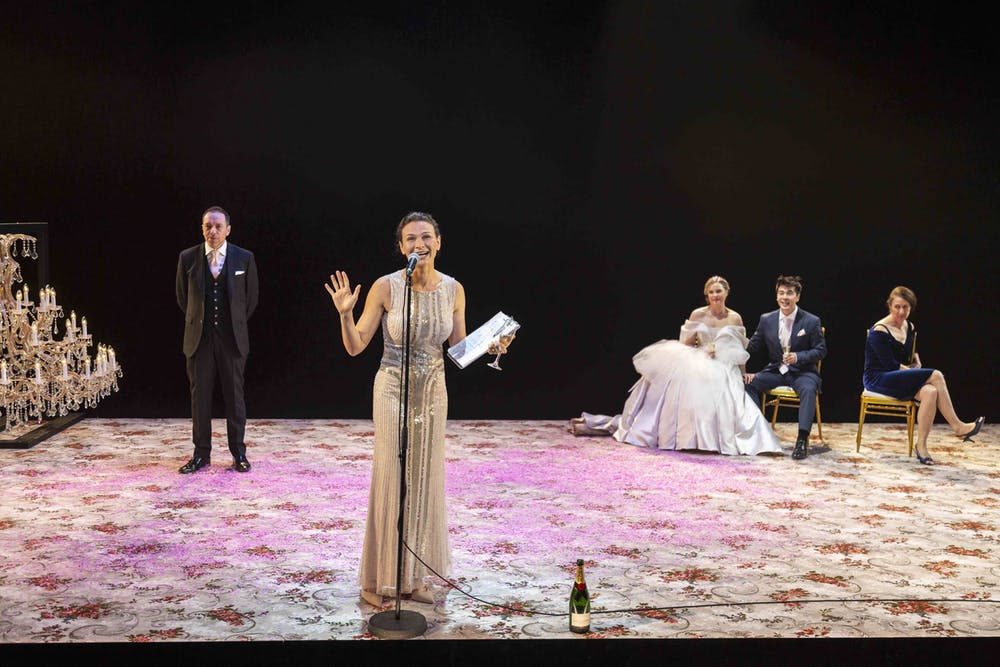 The play is divided into two acts, which shift in mood and genre. At the core of the story is the relationship between two sisters, Justine (Eryn Jean Norvill) and Claire (Leeanna Walsman), who are wrapped up in a fraught dynamic with their mother Gabby (Maude Davey). The first act takes place at a wedding celebration for Justine and Michael (Gareth Yuen) and displays the hallmarks of a conventional modern drama. It has a Chekhovian sensibility in which we spy the interpersonal foibles of a crumbling upper-middle-class, out of step with reality.

In the second act, in which Justine is convalescing at her sister’s country estate after the breakdown of her marriage, the aesthetic tone shifts to speculative sci-fi. Earthly tones transform into a hollowed-out, alien, landscape contributing to a sense of uncanny dread, enhanced by the lighting and sound design. The characters themselves behave like misaligned planets, radiating magnetic energies which repel those in their orbit: siblings are in conflict, mothers turn against daughters, and lovers find they are nauseated by the other.

Sigmund Freud described melancholia through the metaphor of an “open wound;” the melancholic cuts off all libidinal attachments and retreats completely from the world. They grasp after an ineffable lost object and internalize the disappointment and disgust they feel towards a lover or mother, making them prone to narcissism and self-loathing.

Justine, as the portrait of the feminine melancholic, seems to echo Freud’s thinking to the letter. Moreover, the feminist Julia Kristeva described melancholia as a “black sun,” which fits with the lighting scheme used to denote Melancholia’s radiating influence in the play. In the stage design, this symbolism appears as an imposing hole in the ceiling, a cosmic mouth, which rains petals and ash to stunning theatrical effect. 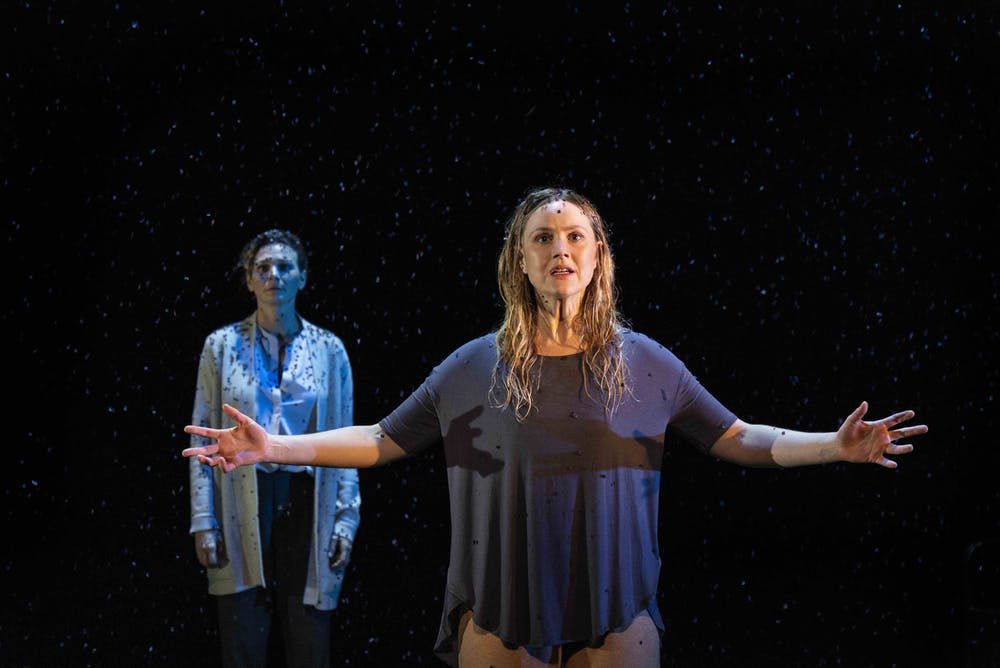 The play begins with a lavish wedding reception for Justine and Michael. The stage is almost bare except for three gilded chairs, a chandelier, and a bottle of Moet–the signs of opulence that bristle and chime with claustrophobic effect. A constant and slow rumbling sound invades the merriment of the wedding band as it plays La Bamba. Claire, the bride’s older sister, anxiously attempts to wrangle time as the reception runs hopelessly behind schedule. We, the audience, are positioned and addressed as the wedding’s inopportune guests.

Justine’s brother-in-law John (Steve Mouzakis) delivers an unsettling speech in which he ritually humiliates the bride before the guests. Justine is a copy editor at John’s firm and has neglected to deliver an overdue tag-line for an important advertising campaign.

As though things couldn’t get any worse, Gabby takes to the microphone and regales the wedding party with a horrid vision of married and reproductive life–a maternal horror which runs the gamut of pregnancy, death, blood, shit, and “the factory of hospital and husband.”

Maude Davey’s embodiment of an abject mother figure is electrifying, darkly humorous, and moving in equal measure. Michael, the affable but suffocating groom, attempts to recover the mood by delivering a Percy Shelley poem, The Cloud, a romantic poem in which elements of nature are personified. But this pushes Justine away, leaving her to contemplate the faraway star Antares, which she spies in the night sky. Spurred on by Antares, Justine presages the inexorable pull of nature toward the void.

In a moment of protest Justine irreparably severs her bond with Michael. The stage retreats too, exposing a grassed platform, which doubles as the grounds of the country estate where Justine will be convalescing. The motion of the stage pulling away impresses upon us the gravitational pull upon Justine’s mental state, which appears more prophetic now, rather than disturbed.

The characters each grapple with the growing awareness that earth is about to be hit by the rogue planet, Melancholia. The brother-in-law, John, holds to the rationality of science dismissing the hypothesis of planetary collision as collective paranoia and crack-pot conspiracy. Justine, on the other hand, is in a state of rapture now, and almost invites Earth’s demise. Claire struggles to come to terms with it and desperately clings to her son Leo (Alexander Artemov)–he is a portrait of innocence, cushioned by the love of his mother and aunt. As Melancholia hits, the three figures, Claire, Justine, and Leo, huddle in a kind of cave they’ve constructed from sticks.

The play ends with the haunting image of Claire’s face twisted into an open-mouthed and silent scream amid an overwhelming wall of sound. Leeanna Walsman’s transmission of horror was palpable in this final image of a mother’s despair. I came away feeling almost guilty, having feasted on the actors’ intensity as they conveyed all too well the existential pain of these doomed characters.

The shadow of Freud also loomed large in my thoughts, leaving me to ponder a tradition in which varieties of psychic pain are transmitted over time through the narrative lens of the male auteur. This isn’t a criticism of Greene and Lutton’s adaptation, which breathes a new kind of agency and energy into the roles of Claire, Justine, and Gabby–but perhaps of Von Trier, who stands accused of relishing in unbridled sadistic narrative ends for the women in his films.

This article originally appeared in The Conversation on July 24, 2018, and has been reposted with permission.