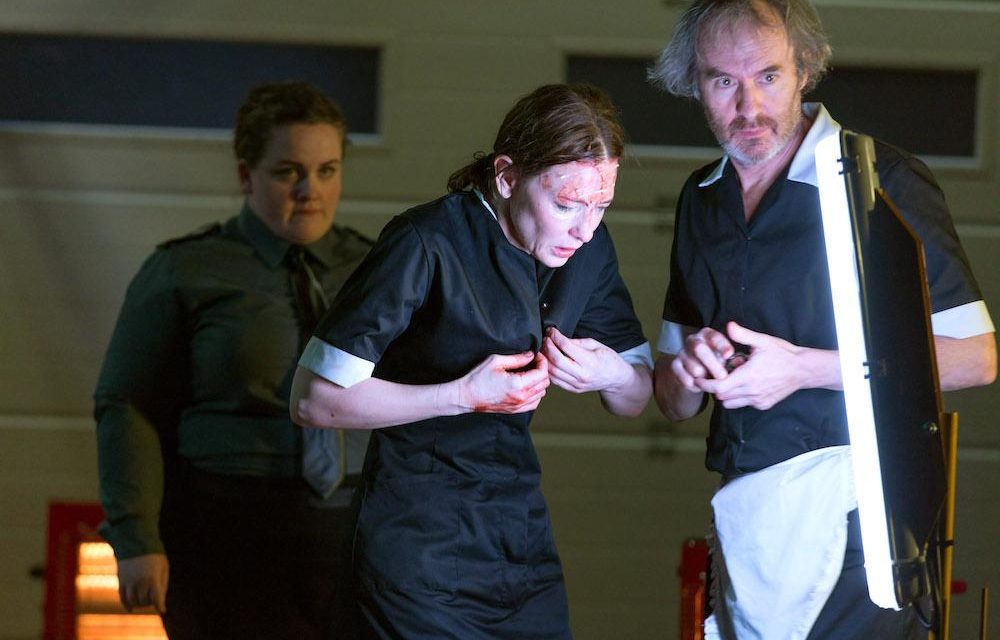 Jessica Gunning, Cate Blanchett and Stephen Dillane in "When We Have Sufficiently Tortured Each Other." Photo: Stephen Cummiskey

The most hyped play of the year is here. Because of the huge demand for seats, and the relative smallness of the Dorfman theatre at the National, tickets were sold by lottery. And were snapped up in minutes. Since then, people have begun queuing at 3pm in the morning for day seats. The whole run has been sold out for weeks. But is the reason for the hottest play in town, the playwright or the director? No, of course not, it’s the actors. Hollywood star Cate Blanchett, as well as Stephen Dillane, from Game of Thrones. What their fans will make of When We Have Sufficiently Tortured Each Other, written by Martin Crimp and directed by Katie Mitchell, is anyone’s guess. What is clear is that the play’s reviews have been gratifyingly mixed, a clear sign that something interesting is happening.

Crimp’s play, which is described as a provocation, is subtitled “12 Variations on Samuel Richardson’s Pamela,” the classic 1740 epistolary novel in which the lecherous squire Mr. B, a powerful landowner, attempts to seduce Pamela, a 15-year-old maidservant. When she rejects his advances, he abducts her and attempts to rape her, before finally, the couple marry. As the novel’s subtitle says, it is about “Virtue rewarded.” Crimp’s play is not; instead, it’s a contemporary modernistic study of the sex war in a world which never stops talking about gender. Crimp’s key insight into the story, as related in a program note, is that neither Mr. B nor Pamela are able to perform the roles required of them by traditional gender relationships. The rake is unable to rape his victim; the victim is more perceptive and stronger than the predator.

In Mitchell’s version, the play is set in a cold double garage, complete with onstage black Audi and glowing electric heater. Blanchett and Dillane play a couple—Woman and Man—who have reached the point in their relationship when they need to spice things up with a sex game. Being rich and literate, they’ve chosen Richardson’s novel as a template with which to explore power and feelings. To add to the role play, they have, in this version, employed a woman to play Mrs. Jewkes, the housekeeper who is Pamela’s jailor in the novel, plus two prostitutes and a rent boy to play schoolgirls and a working-class stud.

The twelve scenes, signaled by the switching on of garish strip lights in between each encounter, are sometimes directly related to the novel, as when “Pamela” describes an escape attempt that goes wrong, and sometimes not. In each scene, there is a power game, in which male power is asserted and then questioned. As the Man and Woman enact gender roles, they sometimes swap places, swap clothes, and swap verbal registers. They also swap dialogues and verbalize each other’s thoughts. So sometimes the Woman physically claims male authority and the Man retreats; the Dominant becomes the Submissive, the Master the Servant. Gradually, as clothes—maid uniforms, sleek suits and blonde wigs—are removed and then put on again, the themes are exposed: the performative nature of male and female roles, the fluidity of gender, the complexities of desire, the contradictions between feminist ideology and sexual attraction, and much else, including class (one of the few shocking moments is when the Man tells Mrs. Jewkes that she is fat because she is poor).

In a class-obsessed society, the society of both Richardson’s novel and Crimp’s play, all forms of desire are mediated by economic power. And in the background, in the chilly world outside of this couple’s love play, the long shadow of Sigmund Freud is deepened by the ideas of Michel Foucault and Judith Butler, while other plays find their echo here: one is Jean Genet’s The Maids (a previous Crimp and Mitchell collaboration in 1999); another is surely Harold Pinter’s The Lover. In general, the production is a cultural mash-up of different elements, including EL James’s Fifty Shades Of Grey. At its dark heart, it is a study of the fantasies that are the often untouched wallpaper of any suburban marriage. In this play, Crimp scrapes our fingernails across these walls, urging us, as he says in the program, to think not only about power and perversity but also about professor Jacqueline Rose’s idea that “sexuality is lawless or it is nothing.”

This wild recklessness of emotional urges is mostly hidden in Crimp’s elegant and allusive text, but does occasionally break out: at more than one point, the Woman says, “I’d rather be raped than bored,” and this refers to the quotation, again in the program, by French author Virginie Despentes in which she says that her own masturbatory fantasies of being ravished come from a social context in which women are forced to take pleasure from their own sexual powerlessness. It is also a moment in which the Woman makes a point about free speech. Unlike Richardson, Crimp is neither moralistic nor ideological about such ideas. He presents them as part of a real couple’s relationship. At the same time, he is well aware that, over the centuries, there is a tradition of men vocalizing female thoughts—as Richardson did in Pamela’s letters and diary or James Joyce with Molly Bloom’s monologue—and he sees his own role in this with suitable irony. He also insists that writing, as Pamela does with a quill and Woman with a laptop, is a powerful means of self-expression, of self-identity and even of a sense of freedom.

What does the play say about power? Given that it shows a game taking place, there’s a distinct sense of irony and ambiguity in the proceedings. The Man is playing at dominating the Woman (isn’t he?); the Woman is pretending to acquiesce (isn’t she?); the Man is playing at being self-destructive (or is he?). He gets most genuinely upset, however, whenever Woman turns her back on him, a tactic that suggests that female power comes from ignoring men. For her part, Woman gets most upset when he threatens to take her writing and is most submissive when he dictates the words she has to write. Unsurprisingly, but vividly, power is equated with having a voice, whether actual or written. When the women are alone, the power games between Woman and Mrs. Jewkes feel friendlier, with a touch of lesbian desire. In the end, as the central motif of torture seems to have exhausted all the participants, there are no easy answers to the question of male dominance and female submission.

As directed by Mitchell, Blanchett and Dillane deliver careful, detailed and compelling performances. She has an extraordinary charisma, her voice as nimble as the skepticism that she displays whenever the Man says something crass. Unless she is deliberately playing, she never seems submissive, although she does show small signs, tender touches of vulnerability. Blanchett radiates ironic intelligence, and her impersonation of the Man is subtly and darkly comic. With the same consummate skill, Dillane gives male power a complex palate of gestures, sometimes seductively persuasive, sometimes crudely bullying, never a caricature of patriarchal authority. His character has economic power, and he knows it, but he is also subject to sudden fits of melancholy. Although Mrs. Jewkes has a minor role, Jessica Gunning lends her a brightness and clarity that comes across in her evident attraction to Woman, and is foregrounded in her scene 11 song.

When We Have Sufficiently Tortured Each Other is at the National Theatre until March 2. 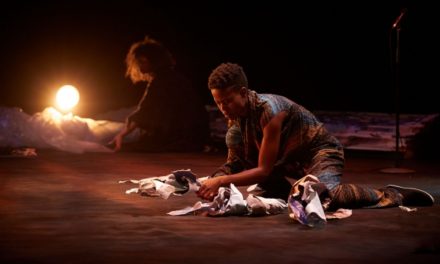 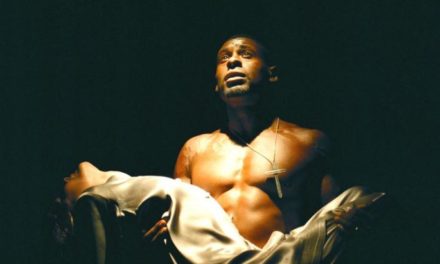