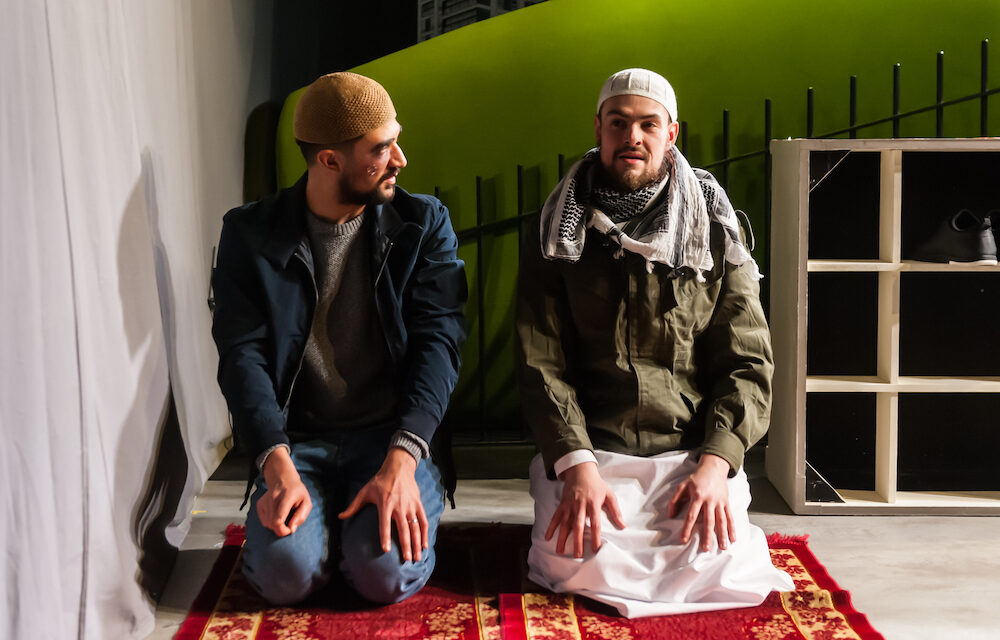 Archie Backhouse and Sam Frenchum in "There Is A Field." Photo: Lidia Crisafulli

The events of 9/11 were a global wake-up call — and that includes theatre. In the wake of the War on Terror, which dominated history for years after (and arguably still does), British producers went in frantic search of Muslim playwrights, Muslim stories, Muslim plays. The results included Shan Khan’s sizzling Office, Yasmin Whittaker-Khan’s provocative Bells, Alia Bano’s award-winning Shades and Atiha Sen Gupta’s thoughtful What Fatima Did…. This covers the decade after 9/11. In other plays, the figure of the Muslim man refusing the outreached hand of a white woman became an iconic image of cultural segregation. More recently, my impression is that Muslim stories seem to be less visible so it’s great to see that Theatre 503 and Synergy theatre company, which works with offenders and ex-offenders, are staging There Is A Field.

It is written by Martin Askew, who for almost two decades has been, in his own words, “a cockney Muslim”, meaning one of many white working-class converts to Islam. Drawing on his own experiences, including a time in prison and trauma after witnessing the fatal stabbing of a friend in the street, the playwright has created an archetypal story which exudes authenticity. Two East End brothers, Mark and Tony, reject their Catholic upbringing and become petty criminals and drug abusers. But while the younger Tony eventually starts dealing, his older brother converts to Islam, and now is known as Abdullah. When their father dies, their mother Maureen, a typical Cockney matriarch, summons her sons in order to bury her husband. But they are slow to show up, and the young man who is most often at their family home is Saleh, a friend of Abdullah.

While Maureen appreciates the willingness of Saleh to help her, he cannot summon up the courage to tell her that the previously druggy Mark is now the strictly Islamist Abdullah. You can see his point — no one really wants to be the bearer of bad news. Besides, Saleh has his hands full: his wife Amina is pregnant, and he works overtime at a dry cleaning place to raise money for their future. Also, she’s not keen on him spending his evenings at Maureen’s instead of staying at his new family home. This sense of young men looking for a new home seems to seep through the play: Abdullah is using religion as a new spiritual home and Tony is trying to persuade his ex-girlfriend, Tracy, to take him back (he’s been a bad boy).

When Abdullah asks Saleh to lend him £500, his entire savings, so that he can help a Muslim cleric who is trapped abroad, the two men’s friendship is put under strain. Saleh, who is more of a poetry-loving Sufi (the play’s title comes from a verse by 13th-century Sufi poet Rumi) than a fanatical Islamist, is rightly skeptical, but can he resist the demands of amity? Emotions run high, and a feeling of latent violence explodes on more than one occasion. The most vicious character is not the Islamist, however, but Tony, who doesn’t much care for religion and has a great speech poking fun at God. His violence illustrates the strain that his sense of masculinity is under, while Abdullah seeks a new notion of self-worth by embracing Islam in the fanatical fastidiousness of the new convert.

The result is a fascinating portrait of the East End today, in which familiar stereotypes and clichés are more or less questioned, and each character has a sharp individuality. Even the older Maureen, whose life’s work is keeping strong, is allowed to waver occasionally, and to show her more needy side. There is a strong contrast between Abdullah’s strict practices and Saleh’s more relaxed if equally taxing, vision of finding God by loving his fellow humans. Askew’s writing is mostly very perceptive and this story builds gradually up to a punchy and powerful climax. There’s a particularly terrific scene between Abdullah and Maureen. If at times the text has a tendency to be a bit too declamatory, and some passages sound as if they have been heavily influenced by rehab textbooks, Askew’s storytelling is compelling and the climaxes genuinely moving.

Directed with clarity and pace by Synergy’s Esther Baker, on a set which features the minarets and high-rises of London’s East End (designed by Katy McPhee and Patrick Bill), the acting is uniform good, with Sam Frenchum and Fabrizio Santino as brothers Abdullah and Tony, while Archie Backhouse and Roseanna Frascona play Saleh and Amina. Sarah Finigan’s Maureen is memorably strong, and the scene where she leads the family in a funeral rendition of the 1967 Jeff Beck classic Hi Ho Silver Lining is a brilliant high point. With its pungent mix of satirical humor (Maureen blames the lack of baths for terrorism) and feminist assertiveness (Amina has a great speech about Muslim women), this is clearly a contemporary story about how needy men seek answers in addiction and belief — and the complex fallout from this quest.

This article appeared in Aleks Sierz on February 26, 2019, and has been reposted with permission.