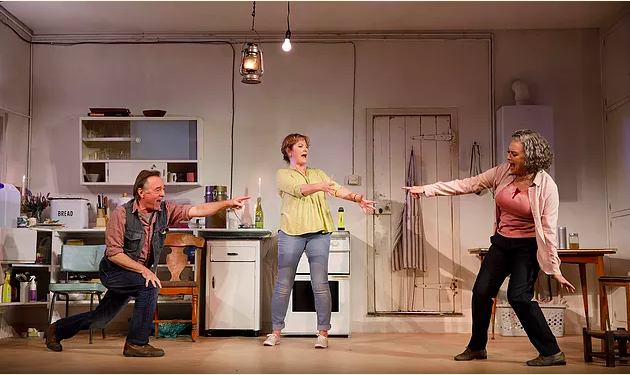 Annoying as it is, I have to start with a spoiler alert. That’s because what’s most interesting to me about Lucy Kirkwood’s The Children—now playing in a splendid Royal Court Theatre production at MTC’s Friedman Theatre, directed by James Macdonald—just can’t be explained without giving away the plot-rabbit that she hides up her sleeve for about two-thirds of the play’s 110-minute action. Stop reading now if you want to save this surprise for the theater.

I can’t cater to that desire because I think the mini-mystery that prolongs Kirkwood’s spring is her play’s one major blemish. The Children presents itself for over an hour as a rather plodding “unexpected guest play.” Rose (Francesca Annis) shows up out of the blue at the coastal retirement cottage of her old friends Robin (Ron Cook) and Hazel (Deborah Findlay), and then we’re fed an unremarkable teasing menu of possible reasons why she’s there (mostly to do with infidelity and feminine competition), until the truth is finally revealed.

That truth is grisly and worth waiting for, sparking a profound conflict and debate. All three characters are British nuclear engineers in their sixties. A calamity has occurred in the U.K. similar to the one that destroyed the Fukushima Daiichi plant in Japan in 2011—a core meltdown caused when a post-earthquake tsunami swamped the basement cooling equipment. The play, it turns out, is not about sexual dalliance. Its subject is self-sacrifice for the sake of others.

Rose has come to ask her old cronies to join a repair crew made up exclusively of retired engineers. They will try to stabilize the damaged reactor, subjecting themselves to dangerous, probably lethal radiation in order to spare the younger engineers now working there, many of whom have young families. Rose feels generational guilt about the meltdown and doesn’t shrink from lobbing it at the others.

We built a nuclear reactor next to the sea then put the emergency generators in the basement! We left them with a shit-show waiting to happen and no evacuation procedure! And then they were the ones standing in the dark, trying to fix something we could have predicted, we should have predicted, opening valves by hand, even though it was already too late!

This is a gripping confrontation. The characters, superbly acted by the dead-on cast, are delineated with a fine brush, each reacting differently to the ethical challenge. Hazel, in particular, needs time to process her complicated loyalties and resentments, and because she turns out to be the only one not already tainted by cancer, she qualifies (sort of) as a bumptious surrogate for the average spectator.

It occurred to me afterward, though, that the play was even more uncommon for its theme—let’s call it eco-altruism. Self-sacrifice has of course been a dramatic staple since ancient times. Tragedy would have been unthinkable without it—think of Alcestis and Iphigenia—and so would all religious drama rooted in the crucifixion story. Even irreligious modern playwrights who disavow tragic grandeur use self-sacrifice for emotional emphasis—think of Kattrin in Brecht’s Mother Courage and the burghers in Georg Kaiser’s Burghers Of Calais.

What’s rare in The Children, it seems to me, is the specifically scientific spin Kirkwood gives this theme in the topically supercharged context of environmental disaster. After all, we now have defenders of long-term environmental policy neglect running the American government and the EPA, not just Koch Industries—zealous defenders of neglect as thought-leaders! Thankfully, the play doesn’t pose the same sort of guilt trip to its audience that Rose does to Hazel and Robin. That would alienate us irrevocably. What it does is frame a tense meditation on the necessity of death, the acceptance of our demise to make room on Earth for younger people, as a practical, ecological problem rather than (as we usually hear about it) a religio-philosophical one.

Once the play moves out of the rut of its trivial love-triangle, it blossoms into a tenacious and thorny think-piece about scientific ethics and the limits of self-interest. There are no easy villains or heroes in it in the end, as there aren’t in, say, Ibsen’s An Enemy Of The People or Churchill’s Far Away (other meaty plays touching on eco-disasters). There is only the permanently urgent quandary of how anyone can act morally under morally haywire conditions.

This post originally appeared on Jonathan Kalb on December 23, 2017, and has been reposted with permission. 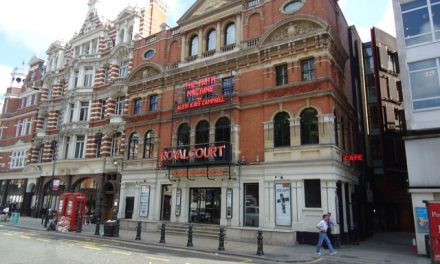