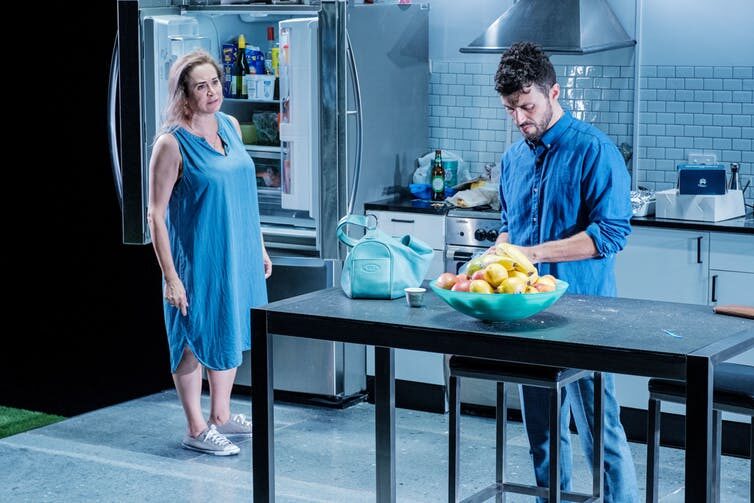 In Australia in 2020, it’s hard to think homosexuality is still viewed as a sin and a lifestyle choice, but it is. With marriage equality and visibility and activism of the LGBTQI community, especially in inner-city Sydney where I live, some claim homosexuality is no longer taboo.

But being part of the Lebanese community, I also know this is far from reality.

Lady Tabouli is a powerful dramatic comedy, written by James Elazzi, confronting the taboo of male homosexuality in the Lebanese Maronite community in Australia.

After breaking off his engagement, Danny (Antony Makhlouf) comes out to his family against the backdrop of a momentous family event – the christening of Danny’s 8-month-old nephew.

A story of tradition

The pressure cooker of the christening exposes desires familiar to migrant families. Danny’s sister Josephine (Nisrine Amine) and his mother Dana (Deborah Galanos) care only for the family’s reputation, keeping busy with beauty regimes, food preparation, and housework. They are desperate to appear respectable and devout.

In traditional Lebanese families, boys are revered as kings carrying forth the family name. When Danny comes out, his family wants only to deny it.

They suggest it’s just a phase, an illness, a disease, a sin – and a choice he can reverse.

I recall traveling to Lebanon in 1999 and having a conversation with my devout Christian cousin about the fantastic gay bars I had been to in Beirut. She quickly denied my story saying “there are no gay bars in Beirut.”

Denial of homosexuality is also common in the Australian Lebanese community. Homosexuality is difficult to accept in light of traditional family values and religious conservatism. If it does exist it is hidden as a shameful family secret.

“We weren’t brought up like this!” Danny’s sister shouts.

“I will never accept this choice!” his mother screams.

His uncle declares: “Dana will never accept her son is a fucking poofter.”

As Lady Tabouli makes explicit: the worst that can happen to a mother is finding out her son is a poofter.

The heart of the family

When reading the press blurb, I thought: here is another cliche story about growing up Lebanese in Australia. Initially, the performance tracked along predictable lines, with in-jokes that Lebanese Australians laughed knowingly at.

Set in the heart of the family home – the kitchen – Jonathan Hindmarsh’s design clutters the stage with all the accouterments of Lebanese-Maronite family life: the olive oil pourer, the water jug brik, a statue of the Virgin Mary.

Director Dino Dimitriadis captures the intricacies of this family life. While the mother blesses the house with incense and holy water, the adult kids eat tabouli for breakfast. Everyone yells over each other, and the routine yallah is proclaimed at the end of each statement.

As the play progresses, nuanced details emerge. Social codes and familial obligation begin to erupt. The performance of gender, sexuality and devotion to God have rules and each member of the family (and the Arabic audience) knows implicitly what they are.

And still, Danny feels the need to be authentic and reveal his sexuality. It is a story that will be familiar to many. Lady Tabouli has received support from the Arabic queer community, visualizing the suffering queer Arabs experience in what are otherwise the most loving of families. There is a universal story here that reaches beyond the Lebanese community to talk to all experiences of the personal, intimate, and familial.

Lebanese families pride themselves on loyalty and togetherness. Our overt expressions of affection and love characterize us as a community with strong familial attachment. With so much love, it is difficult to imagine rejection. It is this paradox Danny and his family contends with. The pain that comes with not being accepted for who you are by the people you love the most and who love you the most.

Lady Tabouli is hard. It made me laugh to see myself and my family mirrored in the gestures and anecdotes, but it also made me angry.

This is a play about suffocating expectations. About the ways we love each other. But also the ways we expect each other to play by the rules. The rules are unwritten but are known. They are the rules of God, of the church, of the village, the community and the gossips.

But brave Danny doesn’t care. Or rather: he cares too much for himself and future generations.

We know secrets can be dangerous and hiding sexuality leads to increased rates of depression, anxiety and suicide. In Lady Tabouli, the problem is not Danny and his coming out. The problem is the family, the community and their denial and inability to accept and understand their son’s sexuality is in fact not his death – but his becoming.

This article appeared on TheConversation.com on January 15, 2020, and has been reposted with permission. To read the original article, click here.