Korean theatre company YVUA ARTS makes their Edinburgh Festival Fringe debut with About Lady White Fox with Nine Tales . . ., the winner of the 2017 Excellent Domestic Performing Arts Production by Korean Cultural Arts Centers Association. This piece is written and directed by Yveyi Yi, who also designed the set and costume, and features original art and live painting performance by Dong Yeon Lee. A powerful retelling of Shakespeare’s Macbeth based on the mysterious and exotic White Fox legend of the Orient, this piece asks: What if Lady Macbeth was the reincarnation of the mysterious White Fox? It runs at the Assembly George Square Studios until August 27.

* The Legend of Gumiho, the Nine-Tailed Fox: This legend derives from ancient Chinese myths and folklores and finds itself prominently featured in the tales and legends of Korea. In this legend, a fox that lives a thousand years turns into a gumiho, a nine-tailed fox. The fox then gains the ability to shape shift freely and often transforms into a beautiful woman to seduce boys and eats their liver or heart.

Interview with the Creative Team, conducted by Walter Byongsok Chon

How did you come up with the concept for this piece, the combination of the White Fox legend of the Orient and the Western classic Macbeth?

YVEYI YI (Director, Writer, Set & Costume Designer): Our company YVUA ARTS creates surreal and experimental performances that reimagine and reinterpret legends, fairy tales, and classics and tell stories through provocative images. I have been working with my long-term collaborator and friend Dong Yeon Monica Lee, an architect and artist. We seek to explore new and refreshing ways of telling stories and to create performances that integrate live painting and performance. Our approach is reflected in Son of the Moon: Blood Wedding and About Lady White Fox with Nine Tales . . . , both of which feature characters and stories created by the “artist” characters.

About Lady White Fox was initiated by our desire to reinterpret and retell the Korean legend in a way that can be appealing to both Korean and international audiences. The first idea we came up with was about the character, the Artist of the Darkness: She manipulates the Lady White Fox into gathering a thousand human livers and, by eating the livers, seeks to create the perfect piece of art. We were struck by the correlation between this character’s desire for transcendence, which resembles Lady White Fox’s desire to become human, and Lady Macbeth’s desire for power that even leads her to commit murder. So we asked: What if Lady Macbeth was Lady White Fox? And what if Lady White Fox’s ninth reincarnation was as Lady Macbeth? The piece resulted in lyrical and restrained visual expressions and storytelling, integrating visual art, performance art, spoken text, the images created by the performers’ bodies, the sounds made by their bodies, gut performance (rites performed by Korean shamans) featuring traditional Korean percussions and the music of German Expressionism, and unique color plates and shapes. 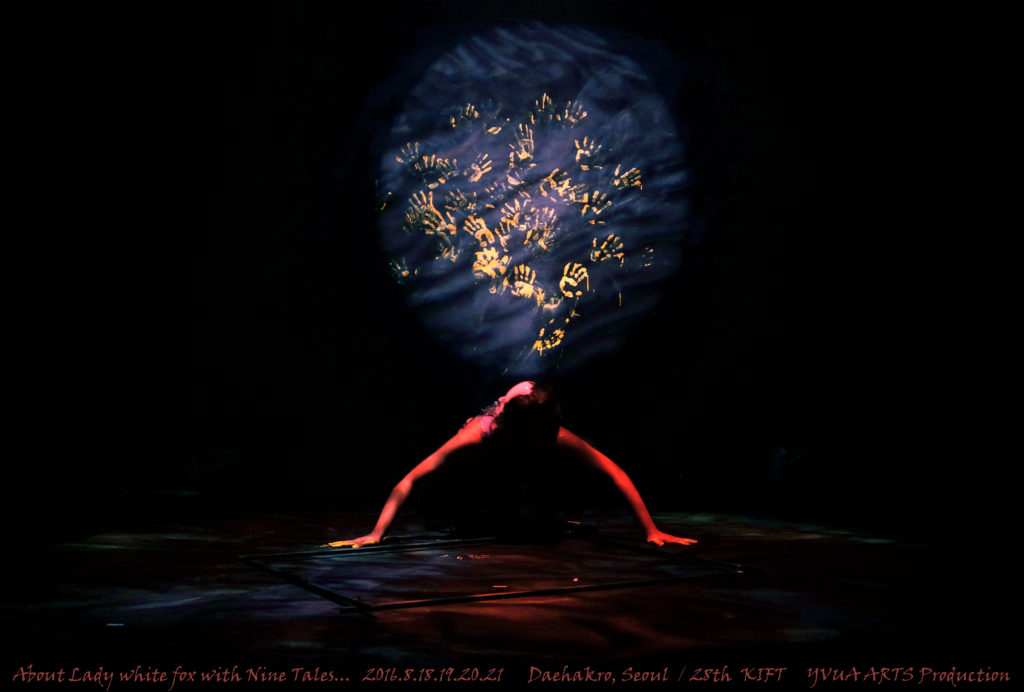 The Artist of the Darkness in “About Lady White Fox with Nine Tales . . .” Photo: YVUA ARTS Production

How was the design of this piece created? How did you envision the visual landscape that merges Eastern and Western aesthetics?

YVEYI YI: We visualized a world governed by The Artist of the Darkness, a world from which its inhabitants try to escape, only to find their effort futile (that is, a world similar to our own). The stage represents the Artist’s cave as well as atelier, while the abstract lines she draws and the circular threads around the stage represent the ever-transmigrating nine lives – the nine tails – of the White Fox. (In our title of the piece, we substituted “tail” with “tale,” suggesting that the nine tails, or lives, are synonymous with nine tales of the enigmatic White Fox.) The costumes, inspired by Western corsets, symbolize the shackles of each character and, with added elements of Korean traditional clothing, reflect both Eastern and Western aesthetics.

DONG YEON LEE (Original Art & Live Painting / The Artist of the Darkness): YVUA ARTS seeks to create surreal and experimental original pieces, made up of unique and provocative images by integrating performance art and visual art. One of our innovations was doing live painting during the performance. As an abstract painter and writer, I used Eastern brush stroke and color to reflect, specify, and symbolize the implication of the content and the director’s vision. My performance of the Artist of the Darkness was greatly enhanced as my own artistic background met with performing arts, adding depth and harmony to my portrayal of the character. By experimenting with various performance forms and practices, we try to create an imagistic aesthetic that is unique to YVUA ARTS.

Could you talk about the rehearsal process?

YVEYI YI: We started rehearsal in 2017. We had one performer (Suwon Kim) play both Lady White Fox and the Warrior (a symbol of both Macbeth and Lady Macbeth). Another performer (Chan Kim) played the Reflection of the Warrior, that is, the Warrior’s alter ego. We spent a lot of time with these two performers to make them sync in movement and spoken text, to have them reflect each other like a mirror image. We also experimented with various movements and sounds to create a gut scene featuring the shaman, who eventually exposes Lady White Fox, the ghosts accompanying the shaman, and Korean percussions.

As a performer, did you have a particular approach to this piece, which merges the East and the West? Could you share your process of approaching your character?

SUWON KIM (Actor – Lady White Fox/MUSA): I did thorough analysis of what my two characters felt and what message they tried to deliver to the audience. Because Lady White Fox and the Musa (warrior) exist in the same world, I focused on finding the elements that distinguish these characters and marking their contrast in my performance  .

MIN JUNG KIM (Actress): In Korea, new play production usually starts from analyzing the script. However, the process at YVUA ARTS starts with the performer, with a focus on how I feel and think about the character, and proceeds with my own development of the character I am playing. This was also a process of self-discovery. If Western theatre started with the Ancient Greek amphitheater, Eastern theatre originated in the gut ceremony. About Lady White Fox embraces the origins of both.

What kind of experience would you like to create for the audience?

HYE YOUNG CHYUN (Stage Manager): Allow yourselves to be enchanted by About Lady White Fox with Nine Tales . . .! You will experience a world where the East and the West meet and merge with each other. You will also find parts that will resonate with you no matter who you are, such as discovering the connecting factors in these stories that inevitably turn a character’s life into a tragedy.

You will encounter monsters and mystical creatures played by several actors in rotation. These creatures, reminiscent of the three witches in Macbeth, add not only a tremendously violent but also whimsical essence to the story as they connect the different worlds together. The Artist of the Darkness created these creatures and made them his servants who would assist him with his creation of the perfect masterpiece of all time. You will not want to miss the exorcism done by the Shaman and company.

SUWON KIM: Our hope is that the audience, whether Eastern or Western, would learn more about the legend of gumiho, the nine-tailed fox. Gumiho possesses a desire to become human and has to devour a thousand human livers to make this happen. However, gumiho’s wish does not, and cannot, come true, and she is stuck as a fox. Macbeth similarly shows how obsessive desire eventually brings destruction. Both stories present desire as vain, a sentiment shared by Buddhism.

CHAN KIM (Actor): We hope that our piece offers the audience an otherworldly journey and an escape from their everyday lives. 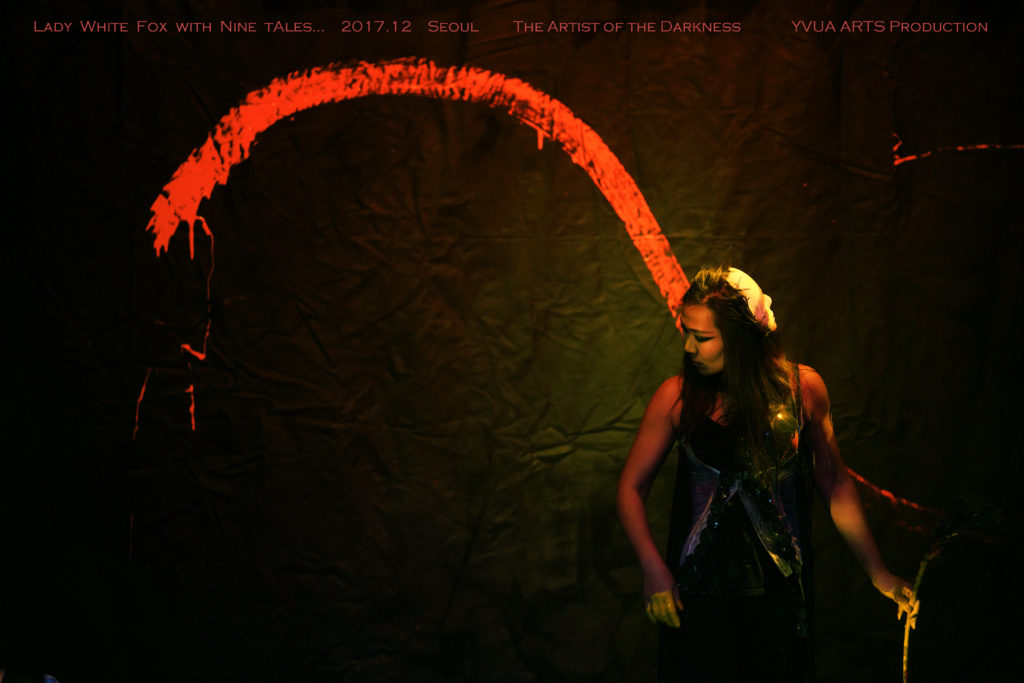 The Artist of the Darkness in “About Lady White Fox with Nine Tales . . . ” Photo: YVUA ARTS Production

HYE YOUNG CHYUN: YVUA ARTS is founded by Korean artists from various backgrounds and seeks to represent the richness of Korean culture through experimental and innovative performances. About Lady White Fox with Nine Tales… is the fruit of our collective effort and vision. I indeed feel very blessed to be a part of this team. I hope this production will resonate with the global community and will be seen by as many people as possible.

Thank you so much for creating this piece and for taking your time for this interview!