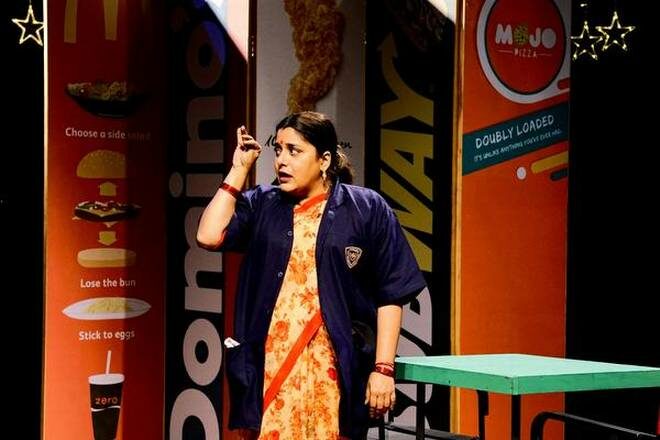 Beyond the publicity grapevine, a new Marathi theatre production – which opened at Dadar’s Shivaji Mandir in late February – that dwells on the pitfalls and promises of celebrity culture through both a distant vantage and an intimate lens is quietly notching up encouraging reports from audiences. Written by Omkar Arvind Kulkarni and directed by Mandar Deshpande, the play is titled Knock Knock Celebrity, in keeping with the current trend of using English in the naming of Marathi plays like The Perfect Murder, Idiots, Vacuum Cleaner and Why So Gambhir?, to cite just a few. This is perhaps to propel them into crossover territory, or even to underline an aspirational bent that is actually particularly pronounced in Kulkarni’s play, which deals with the perils of fandom. It’s a two-hander featuring Kshitee Jog and Sumeet Raghavan who play characters on either side of the ‘fame’ divide. Naina (Jog) is a cleaning lady who works at a food mall on the Mumbai-Pune Expressway and is a die-hard fan of TV superstar Mahesh (Raghavan), known for his starry ways as much as his undeniable charisma. After top-lining Chandrakant Kulkarni’s flashy Hamlet last year, this is another strong tailor-made showcase for television mainstay Raghavan, albeit one in which he is pitted opposite Jog, a versatile performer in her own right.

The play is being routinely staged in the various proscenium venues of the city in the regular mien characteristic of the commercial theatre circuit. But it’s far from run-of-the-mill and is instead an unrelenting psychological portrait of its disparate protagonists. Stylistically, it is essentially two monologues performed in tandem, which allows both Jog and Raghavan to sink their teeth into fleshed-out characters with gravitas and real-world motivations. Far from the satire of, say, Stephen King’s Misery where a similar collision of worlds ended in macabre fashion, Knock Knock Celebrity is decidedly empathetic of either ethos. It reminds one of Padma Damodaran’s recent production of Yasmina Reza’s The Unexpected Man, where a touching romance is fashioned from the unsaid conversations between a famously eccentric novelist, and a woman who reads all his books, on a train ride together. Quite obviously, the divide between the worshiped and the worshiper is often breached in literature.

It must be said that the mall in Marathi theatre is much more than just a glossy facade of consumerism — it is a microcosm of hopes and aspirations, or an escalator to the fast lane, even one that has necessarily been erected over the detritus of urban squalor. Apart from Knock Knock Celebrity, this thematic device of sorts visits recent productions like Vinayak Kolwankar’s Todi Mill Fantasy, that wears its aspirations on its sleeve. In the works of playwright Yugandhar Deshpande, the mall supplies much more than just a scenic function and is perhaps a metaphor for the attention-deficit lives of the denizens of a contemporary dystopia (although unrecognizable as such). We’ve seen this in his earlier plays like Bail Melay and Absolute where, as I had written, “the world of malls and multiplexes becomes an expanse of urban desolation in which identities (are) subsumed.” In his latest play, Char Don Tukade, which he has directed, a series of vignettes unfold in the backdrop of a bustling mall. The top-heavy production features Deepal Doshi, Sushama Deshpande, Shilpa Sane, and Shubhangi Bhujbal, and is playing out in the alternative venues of Pune and Mumbai. The characters who inhabit the play’s fragmented and quirky narrative include a straight-laced middle-class man (Doshi) who inadvertently falls in love with an elderly chorus-girl (the resurgent Sushama Deshpande, who recently delivered a bravura performance in Devashish Makhija’s Ajji), even as another disaffected dancer (Bhujbal) strikes up a bond with a mall cat (intrepidly played by Sane), quite literally. Char Don Tukade completed a run of shows last week and more fixtures are forthcoming.

This article was originally posted on The Hindu on April 5, 2019, and has been reposted with permission.