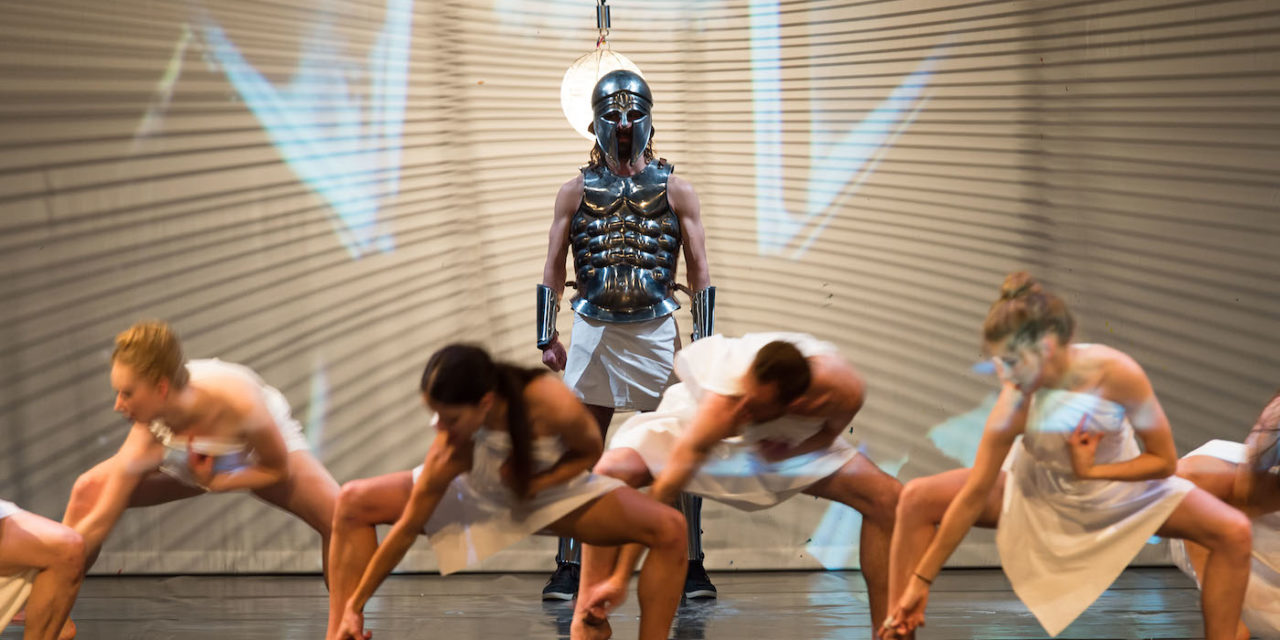 On Mount Olympus (Jan Fabre/Troubleyn): To glorify the cult of tragedy

‘Breathe, just breathe. And imagine something new.’ After sitting for a gruelling 24 hours you, at last, hear the closing words of Mount Olympus. A quarter of an hour earlier the audience in the Bourla Theatre in Antwerp had stood up en masse already to cheer on Jan Fabre’s ‘warriors of beauty’ who, covered in colourful layers of paint and glitter, were rhythmically shaking their backsides up and down in the direction of the audience. It’s called twerking. This dance move became world famous thanks to superstar Miley Cyrus who, in the world of mainstream pop culture, enjoys the dubious status of having pushed back even further the limits of the pornification of the human body. What does Fabre himself actually understand by ‘something new’? The aura of a heroic social resistance hangs around his ubiquitously hyped, superlative-laden ‘masterpiece’, while the performance merely reproduces the dominant ideology of our time in a heightened form.

Mount Olympus can be seen as a synthesis of Fabre’s impressive career as an artist. He carries a number of his tried and tested artistic strategies to their extreme and invited a number of his favourite actors of the past thirty years, outstanding performers such as Els Deceukelier, Mark Moon Van Overmeir and Renée Copraij. At the same time, the performance is one big odyssey crisscrossing the universe of Greek mythology. Within 24 hours, Darius, Eteocles, Hecuba, Ulysses, Oedipus, Creon, Jocasta, Pentheus, Phaedra, Hippolytus, Alcestis, Hercules, Clytemnestra, Agamemnon, Iphigenia, Cassandra, Electra, Orestes, Medea, Jason, Antigone, Chrysippus, Ajax and Philoctetes are passed in review, with all the attendant horror, feelings of revenge and intrigues. Litres of blood and chunks of raw meat fly about – literally. The lord and master of this motley company is doubtless the god of wine, intoxication and madness, Dionysus, who returns to the stage every other minute to kick up a racket with a superior smirk on his face. His counterpart, Apollo, the circumspect god of light and reason, is nowhere to be seen. 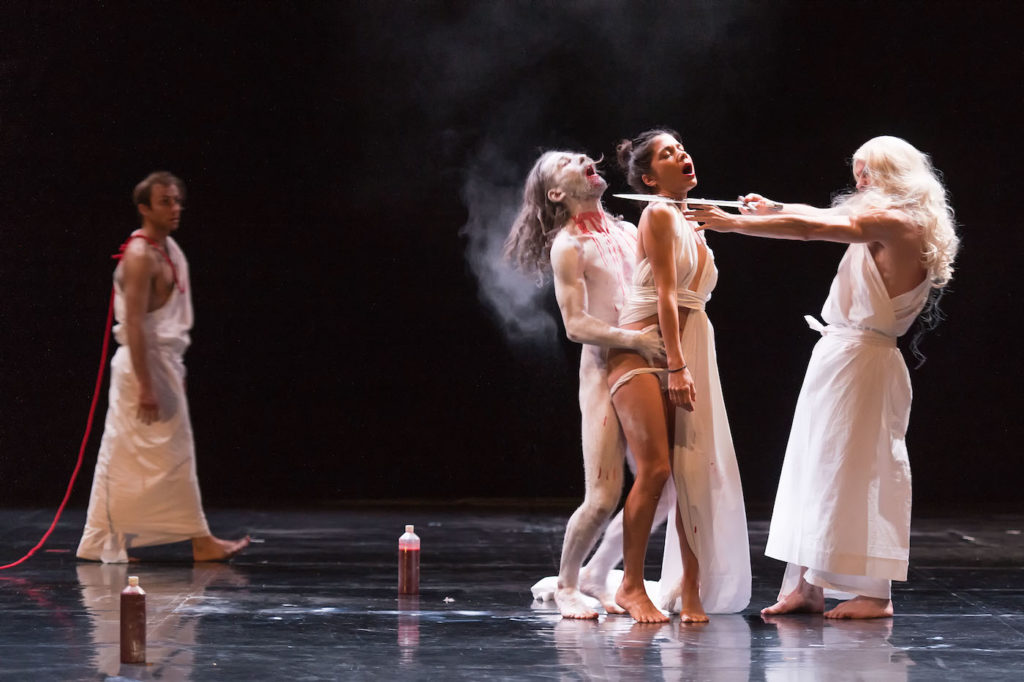 Like Fabre’s renowned durational performances of the 1980s – This is theatre like it was to be expected and foreseen and The Power of Theatrical Madness, which were both restaged recently – large parts of Mount Olympus are also built up out of actions that the performers repeat dozens of times in a row: the recital of a few lines, the execution of a specific action or the dancing of a short phrase, etc. The repetition and the duration lead sometimes to the rise of ever-different interpretations, and sometimes to the ‘emptying itself out’ of what is depicted (as if meaning were gradually leaking out of it). They almost always result in the exhaustion of the performers. At one point Clytemnestra and Iphigenia circle around the war hero Agamemnon for a quarter of an hour, while simultaneously revolving on their own axes, like planets spinning around the sun. Their graceful movements gradually falter more and more. One of them stumbles, but gets up immediately to continue dancing, encouraged by wild applause that stretches from the pit to the balcony on the fourth floor. You wonder what backstage practices prop up so much physical stamina. Let’s hope they are limited to massages and power naps.

Unlike with the dance marathons organized in the United States during the Great Depression of the 1930s, where couples sometimes whirled around for more than 100 hours apparently to win the prize money, the stamina in Mount Olympus does not breathe despair, but the heroism of subversion. The performers, whom Fabre has called his ‘warriors of beauty’ throughout his career, demonstrate an impressive combination of physical bravery and transgression. But what is the moral protest that unmistakably emanates from this show? Who or what are his warriors in fact opposing? The power of the big bad director? In that case, we can fully equate opposition with submission: the more the bodies ‘oppose’ the disciplining from above, the more disciplined they show themselves to be. These then are not wolves, but sheep in wolves’ clothing.

A different answer comes from the mouth of the seething Ajax, who calls on everyone to revolt against ‘the tyranny of sleep’. When, towards the end of the marathon performance, the majority of the cast seems to be losing the fight against sleep – we see a remarkable mix of ‘genuine’ tiredness after all these long hours of hard labour and an implausibly acted sleepiness – the warrior paces in a rage across the stage to wake up the yawners by kicking them in the backside or pulling their hair – which he has to repeat about a dozen times. Sleep proves to be a tenacious enemy. Sturdy Ajax represents the in our day far more emphatically present ‘tyranny of waking’. In its furious quest for new resource-rich areas, contemporary consumer capitalism is namely rapidly gaining ground on time. Now that we have to be more and more reachable, more and more available to work and consume, our days are eating up our nights. Children can no longer be bored, a party has to last the whole weekend, and we have to be able to buy on Sundays. In a 24/7 society, everything can (must) be constantly productive, communicative and performant. ‘I want a life without interruptions’, as they say in Mount Olympus. Absolute horror.

Under the tyranny of waking lurks the denial of illness, old age and death. Growing old, looking older, learning to confront death during one’s lifetime, learning to cope with physical deterioration through illness … All this today seems like a curse. And yet death is ubiquitous in Mount Olympus. Indeed, Greek mythology abounds in casualties. But the dead mix on stage with the living and inexorably keep on breathing, talking and running. They are not really allowed to die. Nota bene: one of the older actresses, Anny Czupper, calls sleep at one point ‘an uninspired rehearsal for death’. Even when she is dead, she won’t really be sleeping: ‘I will sleep forever with my eyes open.’ What do you call those dead again? Oh yes, zombies.

I long ask myself: is this really a flat affirmation of the 24/7 regime and not rather one or other subtle critical mimesis? Any doubts I had disappear during one of the closing orgastic scenes. The youngest part of the cast chooses to use the last ounces of energy to run like mad (without going forward, as though the performers were on a treadmill), while they get covered in various colours of paint and glitter. It is only after my eyes have gotten used to all that commotion that I notice the lonely couple that seems to be sleeping peacefully. Now that is an act of resistance, I think, relieved. But then what? A moment later they stand up and run along joyfully with the rest and then twerk along. 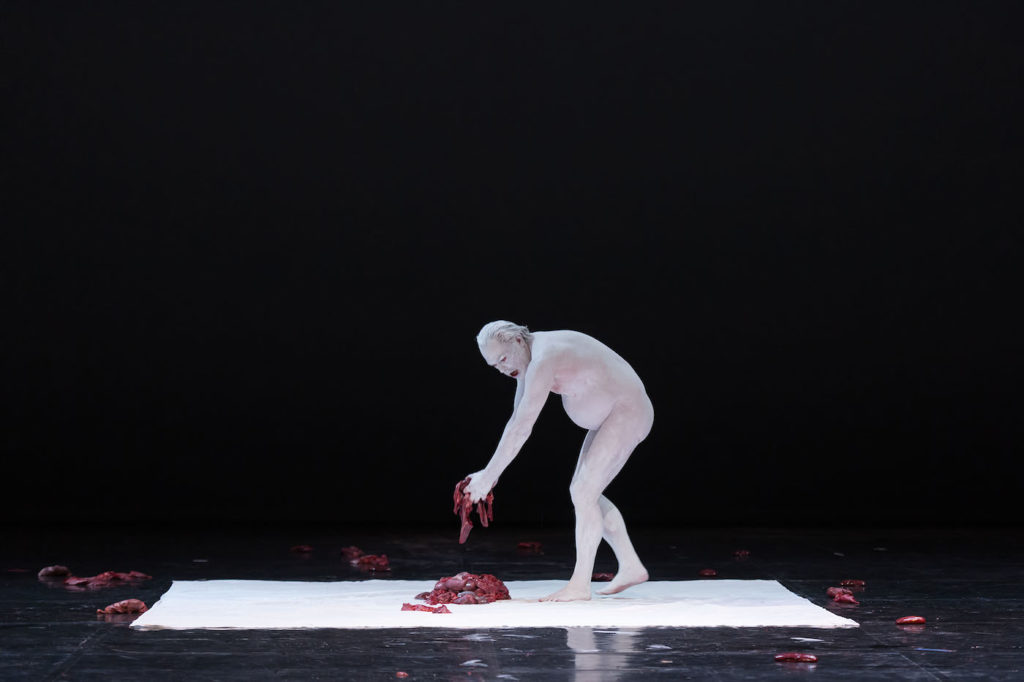 Or wait. Maybe I’m seeing it all wrong and the act of waking is, in fact, a metaphor for thinking? Is the obligation to remain awake in essence a call to independent thinking? To the resolute rejection of the many manifestations of the varnish that risks lulling our critical sense to sleep? However, the way in which intellectuals are portrayed in Mount Olympus contradicts this reading. Somewhere beyond the half of the performance, a number of Greek philosophers appear in what is intended to be a comic scene. These turn out to be weak figures that utter meaningless groans such as ‘oh’, ‘ah’ and ‘hum’. Just at the moment when they seem to want to say something important, they draw on their pipes, from which no words emerge, but wisps of smoke that evaporate impotently in the air. It is a towering cliché: philosophers are too busy staring at the starry sky to see the well in front of them. What does this ridiculing of the intellect tell us after all these spontaneous celebrations of the transgressive body and the bloodthirstiness of the Greek warriors?Just do it – don’t bother thinking. ‘Make America Great Again!’, shouts Donald Trump on the other side of the Atlantic. Our world has in fact only become more complex. That is why now more than ever we need time and attention for thorough reflection. Vita contemplativa. At the end of the performance, however, Fabre goes one step further. Full of contempt, Dionysus talks about those marginal ‘poets’ who believe that no single truth exists but several truths. Bullshit, says the god of drink, there is of course only one truth. And its name is: madness. 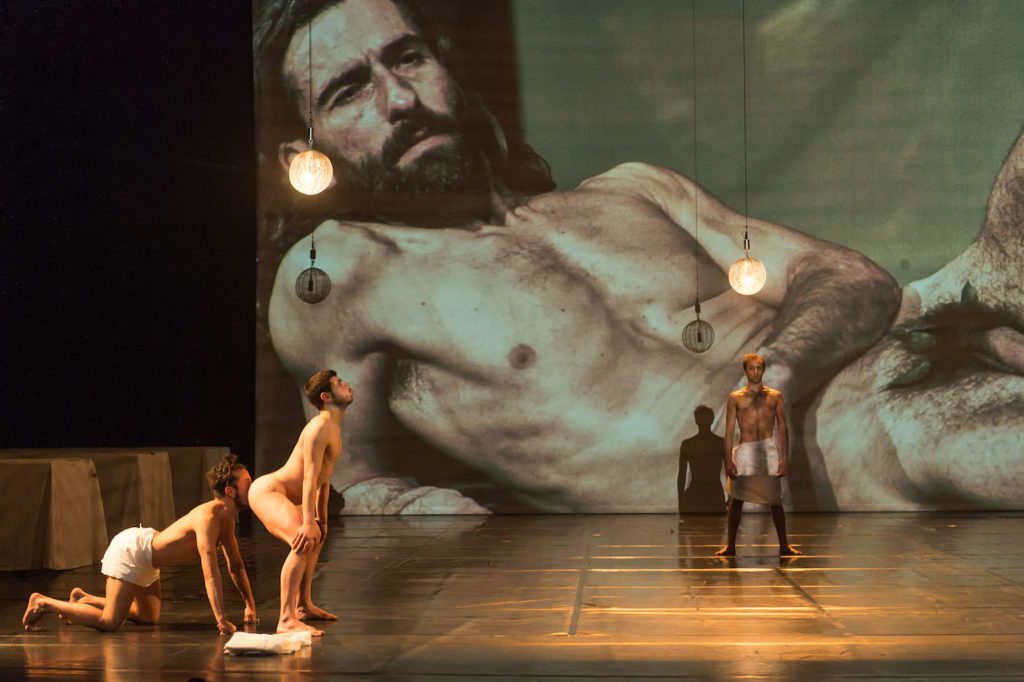 Doesn’t that sound a bit fascistic, I ask myself. Can you say that at all of something that is ‘a little bit fascist’? I am not the first one to make the link between that notion and Fabre’s work. And it remains of course ‘only theatre’. Nevertheless, a certain view of mankind and of the world emerges from Mount Olympus which is not innocent – especially in the disturbing times we live in. The day after the show I seek counsel from the wise Susan Sontag, who in her essay ‘Fascinating Fascism’ from 1974, characterizes the fascist fantasy as follows: ‘[Fascism] stands for an ideal, and one that is also persistent today, under other banners: the ideal of life as art, the cult of beauty, the fetishism of courage, the dissolution of alienation in ecstatic feelings of community; the repudiation of the intellect; the family of man (under the parenthood of leaders).’ I detect most of these features in Mount Olympus. The performance is characterized by fascism in its contemporary form, under its current colours, that of the 24/7 regime.

In light of all this, the physical state which this event leads you to as a spectator is significant. Not only does the lack of sleep threaten to erase your critical sense, but the compelling audience dramaturgy, which steers towards a Dionysian participation, can stun the minds of the spectators. When at the end of the performance, the entire cast, in one drawn-out orgastic discharge, shouts ‘give us all the love you got!’ more than ten times, then the audience shouts in unison and people clap en masse. I certainly don’t want to give you all my love, I quietly think to myself. We don’t seem to be in the Bourla Theatre, but on the plain of the Tomorrowland festival. There too you can fully feed upon repetitive ecstasy and a compulsion for freedom. There too you can idolize the future. There too, beneath the ecstasy of the new there lurks nothing more than a hyperbolic confirmation of what exists. ‘Imagine something new.’ We can throw that right back at Fabre himself. Regime art gets zero stars from me.

Translated from Dutch by Patrick Lennon

This article was originally published on http://www.e-tcetera.be/. Reposted with permission. Read the original article. 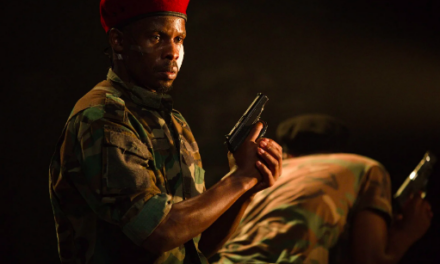 “Angola Camp 13” is an All-Powerful Musical and Choreographic Masterpiece!