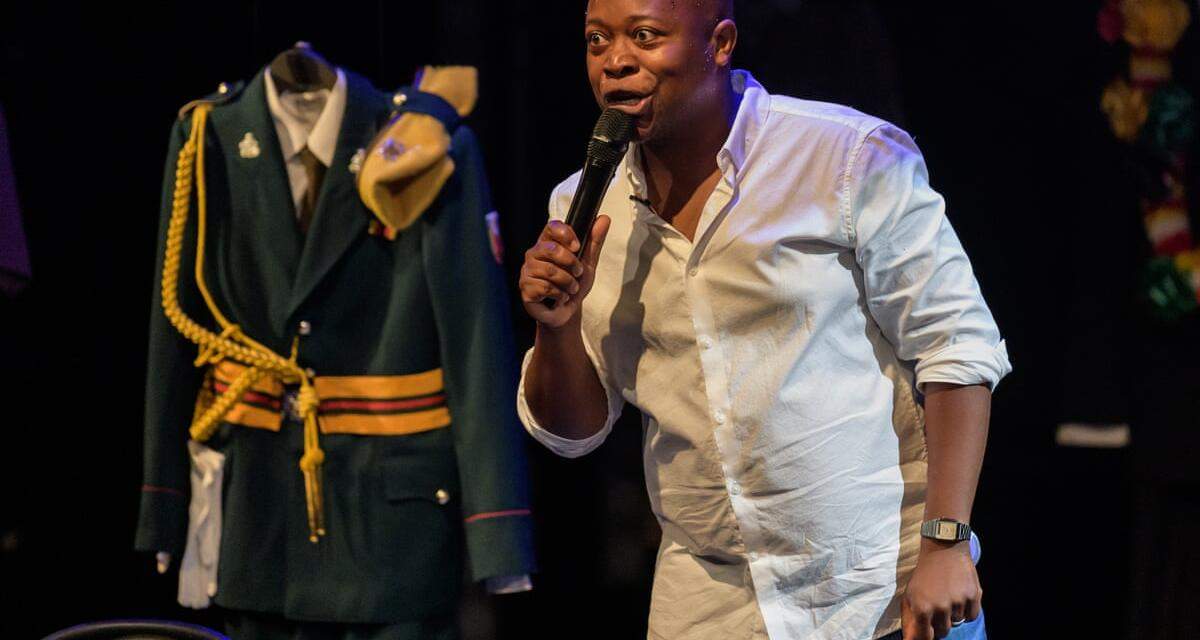 There are two in one Tonderai Munyevus. I meet both of them on a snowy February evening at Brixton House, a new Off-West End theatre in South West London. The one onstage is a ruffler of feathers, at least in his play, Mugabe, My Dad & Me, a thorough indictment of post-independence politics in Zimbabwe that treads on the toes of the powerful on the land, bound to upset post-colonial establishments, overturn existing narratives, and unearth painful histories.

The second Tonderai I meet offstage in the café of Brixton House seems to walk on fresh eggs. His sentences are neatly cut, calculated, often tucked in diplomatic tones. Between sips of coffee, I ask him how it feels to headline the opening of a theatre in Brixton, a place that remains central to historical and cultural experiences of Black people in Britain. “I was thrilled when we got the invitation,” he says, “there is a sense of community and kinship between Africa and the Caribbean.” Tonderai relates this kinship to the gesture of having Bob Marley perform in Rufaro Stadium on the day Zimbabwe (then going by the name Southern Rhodesia) attained her sovereignty after throes of an armed struggle against colonial Britain. 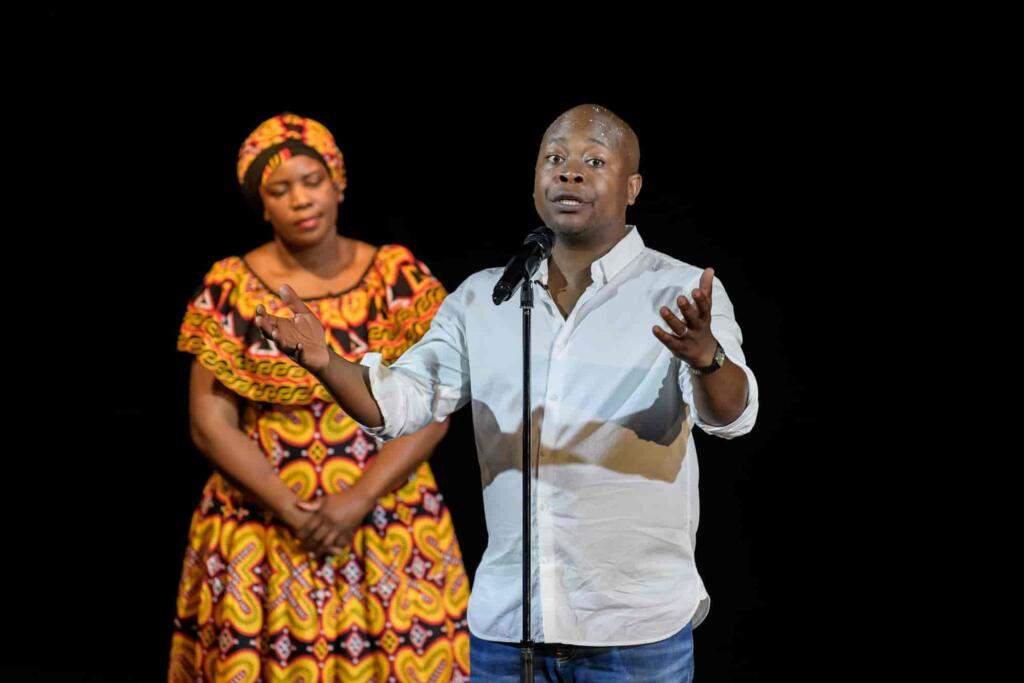 Whereas Tonderai sets Mugabe, My Dad & Me in the period between Zimbabwe’s independence in 1980 and President Robert Mugabe’s ouster in 2017, the play reveals complex realities and far-reaching ramifications that surpass the Mugabe era, the Zimbabwean citizens that physically confronted Mugabe’s abrasive grip on power, and the geography and national boundaries of the country. It is a play in which the personal is stitched with the political. Tonderai, who prefers being described as a Zimbabwean writer and actor to anything else, emigrated to the UK with his mother at the age of 13, got enrolled in a British school, and later took a theology degree at King’s College, London, before finding his niche in the arts. Although he had left Zimbabwe in 1996, Zimbabwe, mostly pegged on Mugabe’s politics, came trailing him to the golden pavements of Britain, usually through BBC and family correspondences.

In a spell-binding one-man narrative drama, Tonderai presents that Zimbabwe, relaying some of the major events that defined Mugabe’s political career. Noteworthy is the 1983-1987 decimation of over 20,000 dissidents (mostly of the Ndebele ethnic community) under the vicious watch of President Mugabe and his then security state minister (now president) Emmerson Mnangagwa in a massacre. The massacre that came to be known as Gukurahundi (which in Shona means “the early rain that washes away the chaff”) still echoes with a deathly shrill in that part of Southern Africa. Tonderai performs these historical happenings painstakingly, without restraint or exaggeration. 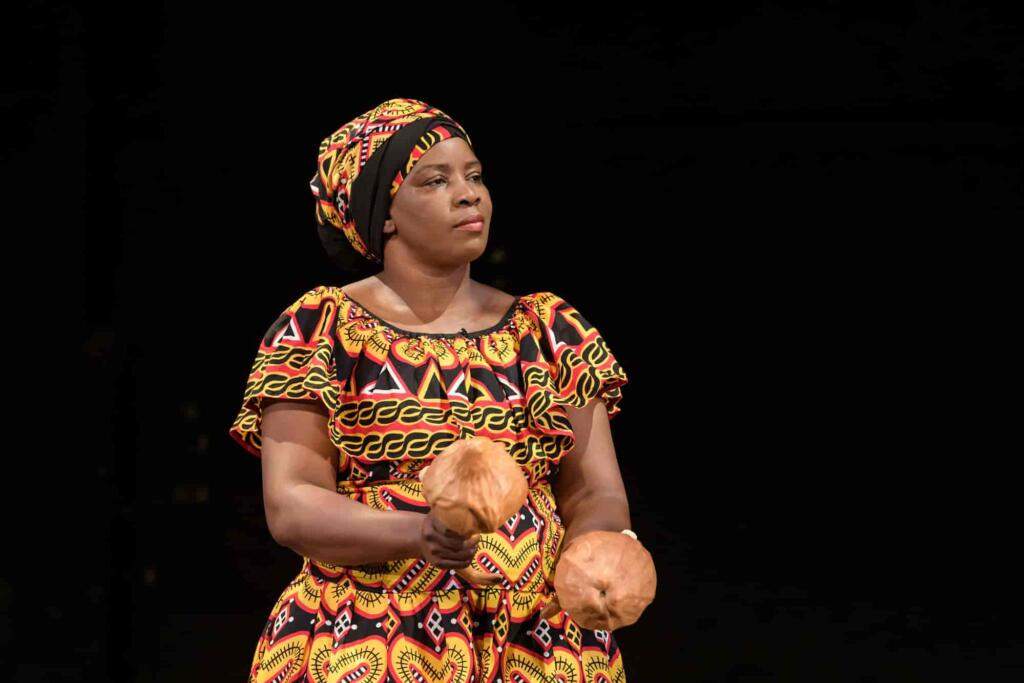 Mugabe, My Dad & Me is produced by ETT, Brixton House and York Theatre Royal in association with Alison Holder. Photo credit: Jane Hobson.

Yet, in its diagnosis of the political woes of post-independence Zimbabwe, Tonderai’s play does not play a blind eye to the role of the West. It pokes fun at Western media’s delight in trumpeting the nastiness of Mugabe’s politics while overlooking similar or related problems in the backyard of the West; it raises eyebrows at the sanctions the European Union slapped on Zimbabwe in the wake of land redistribution to Black Zimbabweans and the election malpractices in the early 2000s; above all, it cites the UK and the US’s lack of commitment to institute land reforms by compensating white farmers (10 years after independence) as spelt out in the 1979 Lancaster House Agreement.

But it is around Mugabe, the man and his politics, that Tonderai’s play revolves. This is no surprise considering it is the dramatic fall of Mugabe in 2017 that inspired Tonderai to write the play. Tonderai was not at home, but like many Zimbabweans in the diaspora and other people round the world, he was astounded by the anti-climax of Mugabe, who in the play Tonderai likens to “a Shakespearean figure performing his exit monologue,” and the thousands of Zimbabweans who took to streets to celebrate his fall. “You see it was unthinkable that Mugabe would ever be removed from power. So, there was that euphoric feeling when he was deposed,” says Tonderai, staring at the beads of rain pelting on the glass windows of the café. Mugabe would die two years later, and it wouldn’t take long for Zimbabweans to realize that the more things change the more they remain the same. 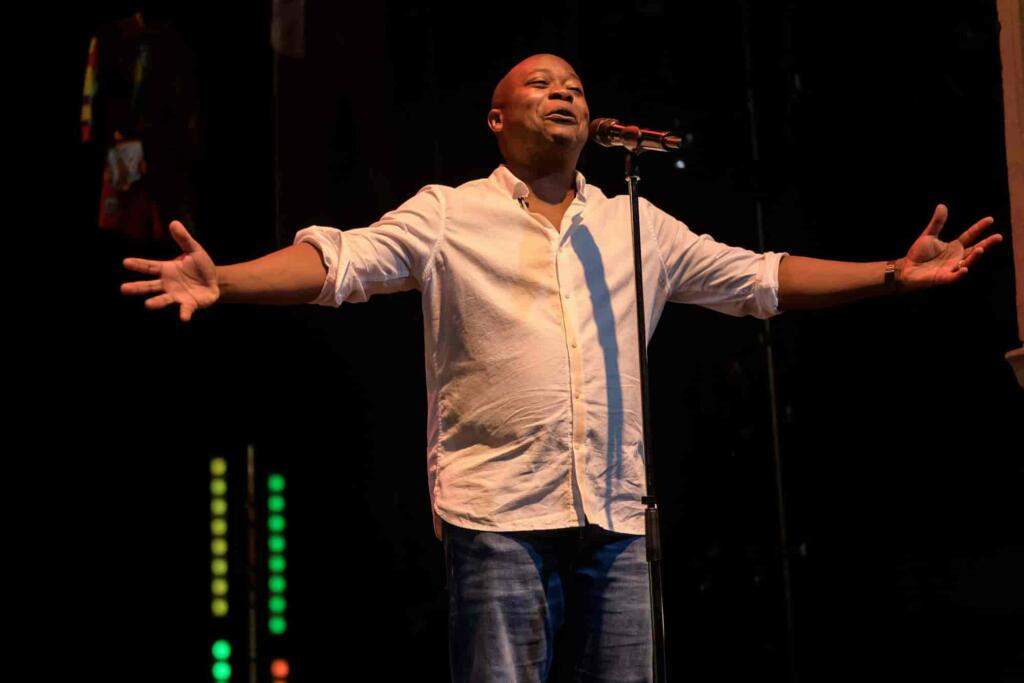 Mugabe, My Dad & Me is set in the period between Zimbabwe’s independence in 1980 and President Robert Mugabe’s ouster in 2017. Photo credit: Jane Hobson.

In the play, Tonderai performs returning to Zimbabwe to make libations upon his father’s grave, and to see for himself the Hero’s Acre that Mugabe had carved out as a mausoleum site for himself and his political acolytes when the sun finally sets upon them. It is there in a dramatic finale that the ghost of the Zimbabwean leader is disinterred. “I don’t have powers to conjure up Mugabe’s ghost because I am not related to him by blood,” explains Tonderai, “I therefore use the Mbira.” Indeed, the Mbira, a traditional Shona musical instrument linked to spirituality and possession, interposes the narrative and action of the play, setting the pace, painting the mood. Tonderai and his Gwenyambira (a female Mbira performer), Millicent Chapanda, make a seamless ensemble, playing the Mbira itself invoking the guardian spirits to witness a history.

In retrospect, Mugabe, My Dad & Me is a play of historicization, of memory, of healing. “All migrants suffer from memory,” Tonderai notes, adding that the play is an attempt to work things out, and wrestle with the ghosts in his life and nation’s history. That internal conflict shapes the rugged structure of the play, which dispenses with the linearity of plot in mainstream dramas, starting the story at the end. It is a deliberate style. “There is no use to find the beginning. It’s all broken… too messy. So much has happened that no one can tell it in an orderly fashion,” Tonderai argues. 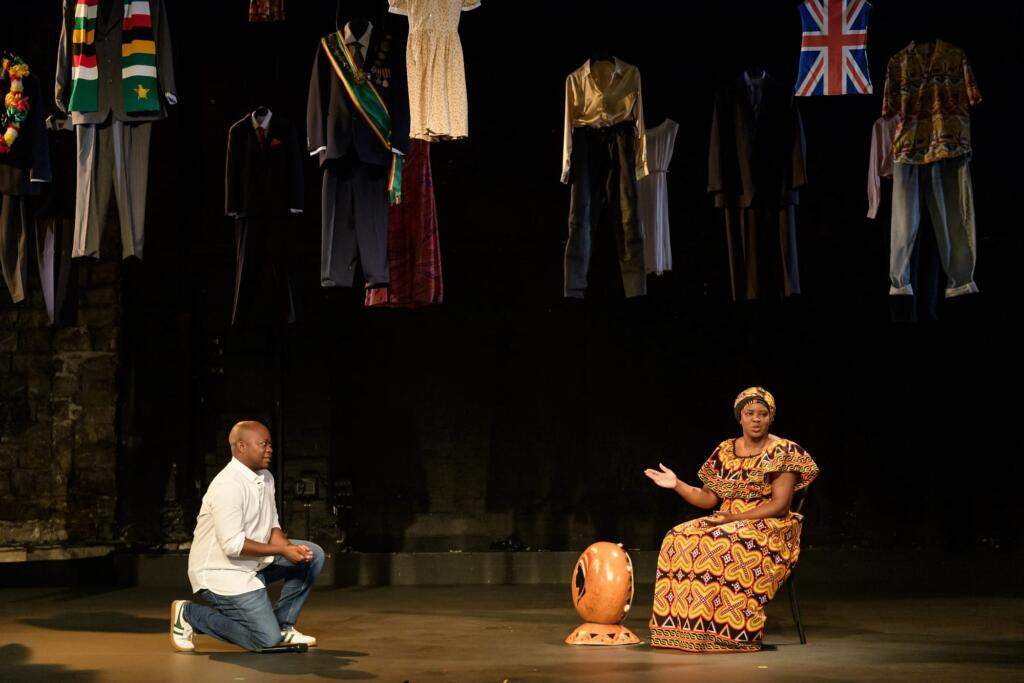 Tonderai and his Gwenyambira, Millicent Chapanda, in Mugabe, My Dad & Me. Photos credit: Jane Hobson.

Rather than shying away from difficult subjects like sexual identity, Tonderai joins the league of African artists, such as the late Kenyan memoirist Binyavanga Wainaina, the South African visual artist Zanele Muholi, and the Nigerian poet Romeo Oriogun, who have used their work to celebrate their sexuality. I ask him if his play tends towards queering African theatre, knowing queer and African sounds like an oxymoron to some people and African leaders like Yoweri Museveni and Robert Mugabe have in the past made scathing remarks against homosexuality, albeit for political capital. “That play is 100 percent truth. Nothing is made up,” says Tonderai, who is openly gay and preparing to take a wedding ring from a man this summer. “I will need another cup of coffee,” he says, 45 minutes later. And I realize it is time I let him retreat into the rehearsal studio to get set for another show that evening.

Mugabe, My Dad & Me is directed by John R. Wilkinson and produced by ETT, Brixton House and York Theatre Royal in association with Alison Holder.

This article was published by The African Theatre Magazine on March 18th, 2022, and has been reposted with permission. To read the original article, click here.