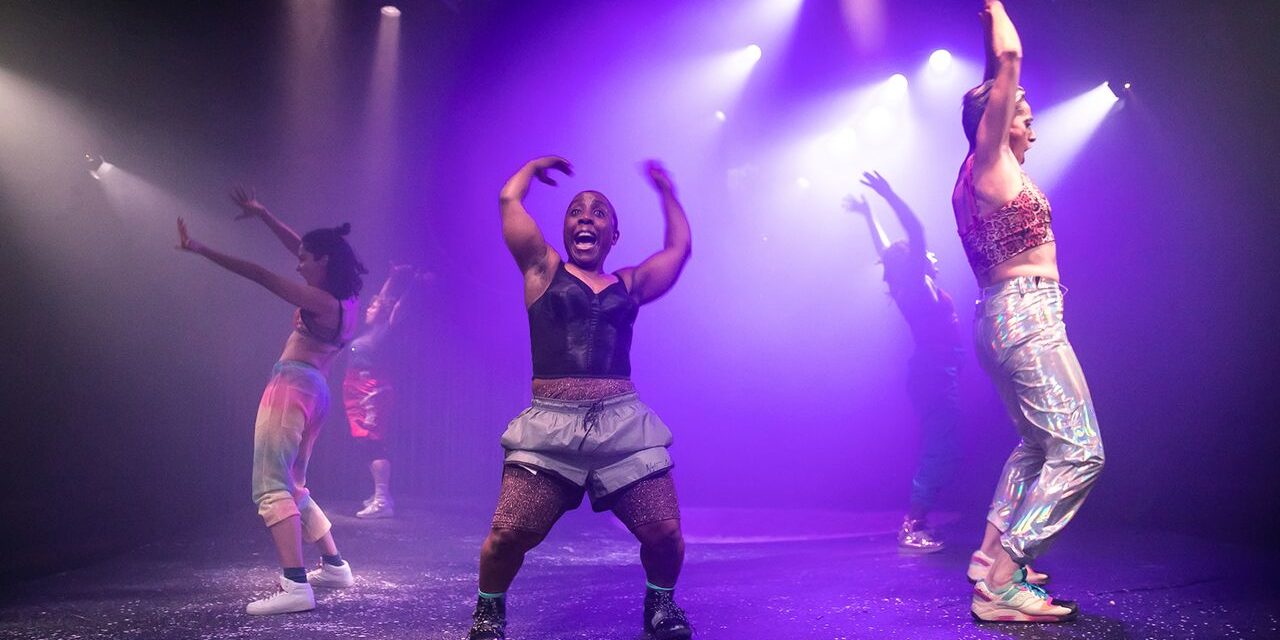 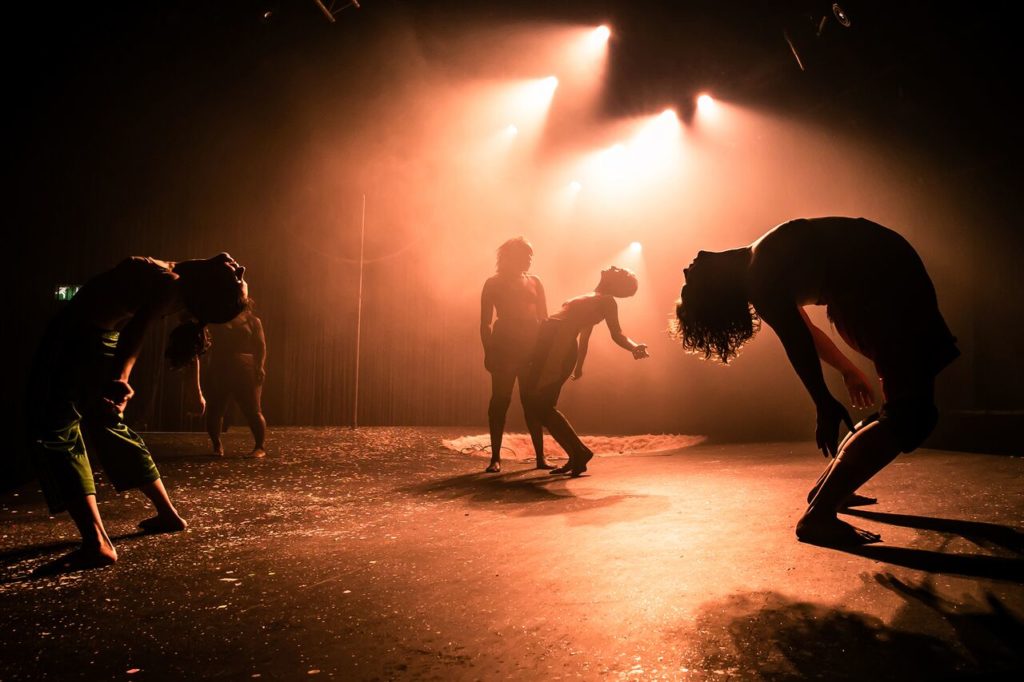 Ensemble Photo Credit: The Other Richard 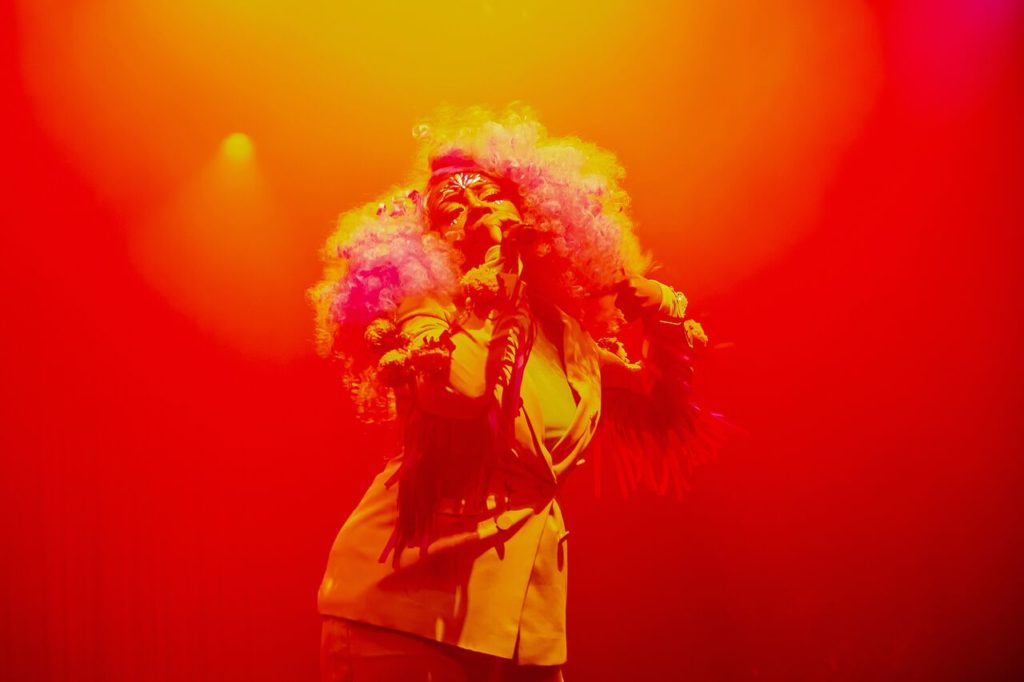 There are at least three ways of grasping this new piece at London’s Royal Court. I’ll begin by outlining my own way in, which was, perhaps, somewhat atypical, as it follows the trail of directing/devising rather than new writing that this venue is famous for. 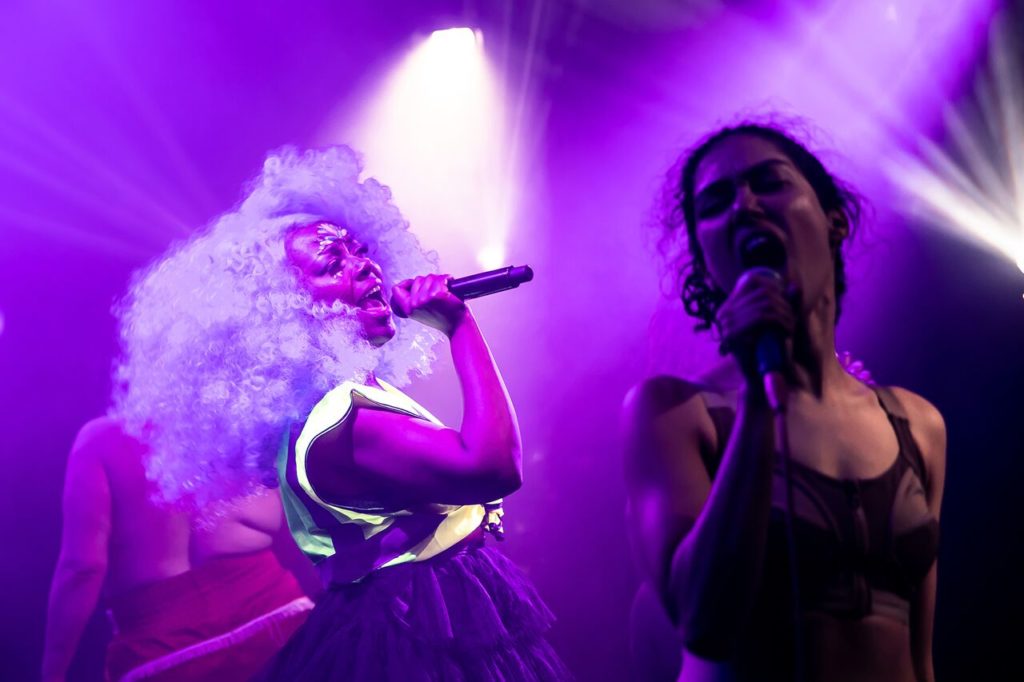 Helen Goalen and Abbi Greenland, the founder members of Rash Dash, are the kind of theatre-makers who take a multi-tasking approach to their own highly celebrated work–they write and compose and direct and perform their pieces which, when published as scripts, feature drawings from rehearsals, and carry the single authorial credit of their company name. Ensemble ethos–and the principles of deep pleasure and female friendship–are embedded at the core of their work (which has also, incidentally, heralded a kind of movement emerging in recent years via the tents of the Latitude Festival and the Edinburgh Fringe, under the label of “gig theatre”). On this occasion, Goalen and Greenland, unusually, take on the single role of the directors of the piece, working from a pre-existing performance text. 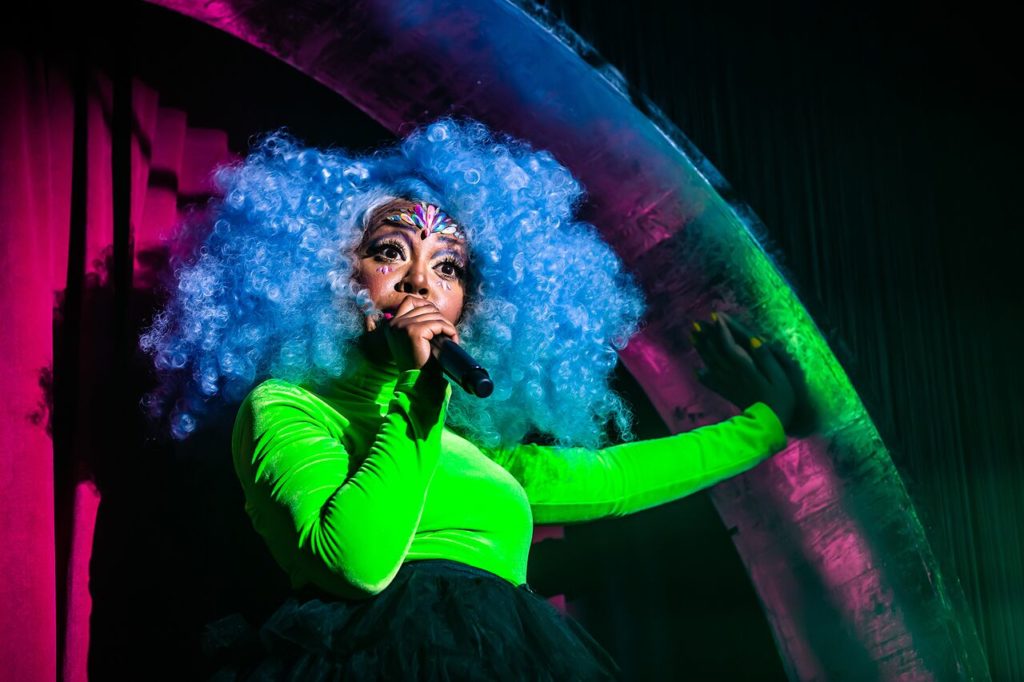 Another way into understanding Hole would be via an interest in the debutante author of the text herself, Ellie Kendrick, who I have subsequently discovered, is a famous theatre, film and TV star in her own right. Aged 28, Kendrick is a Cambridge graduate with Wikipedia pages in English and German and, as her play would testify, with overt interests in astrophysics, gender politics and Greek mythology. 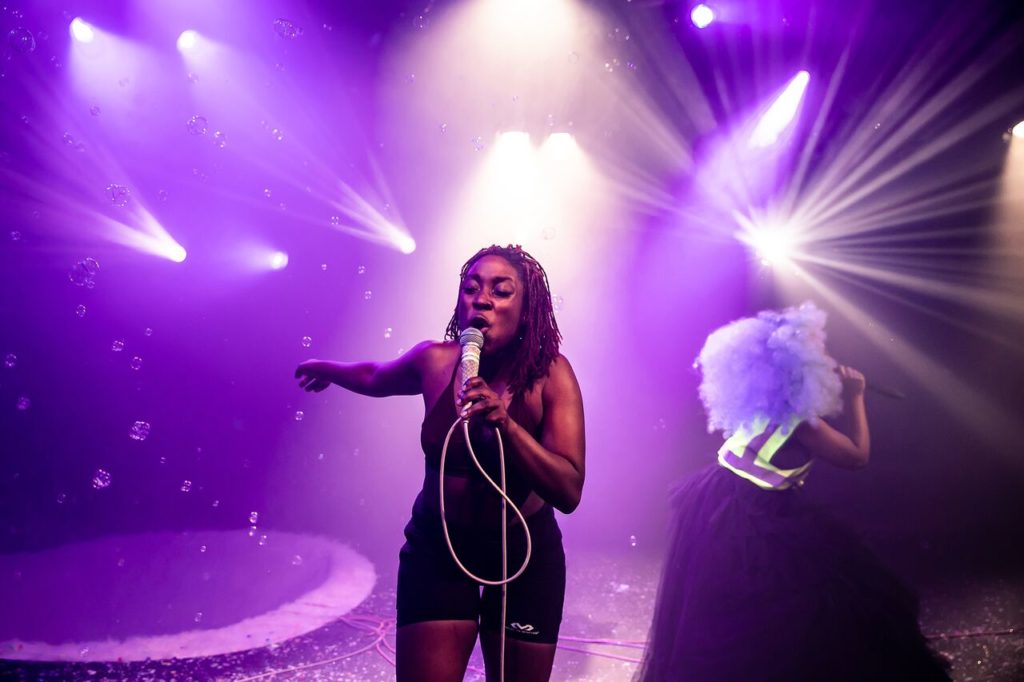 A third way of appreciating the achievements of this theatre production–which features an impressive and intersectional diversity of female physicalities and talents on stage–would be via the very evident challenge to the mainstream model of new writing theatre production in Britain. For example, this show’s cast assembles composer/musician Ebony Bones who found international fame on her own terms via MySpace in 2008, Canadian Neo-Burlesque artist Rubyyy Jones, acrobat, mezzo-soprano and Graeae collaborator Alison Halstead, former Kneehigh lead Eva Magyar, as well as stunningly versatile performers Ronke Adekoluejo and Cassie Layton. 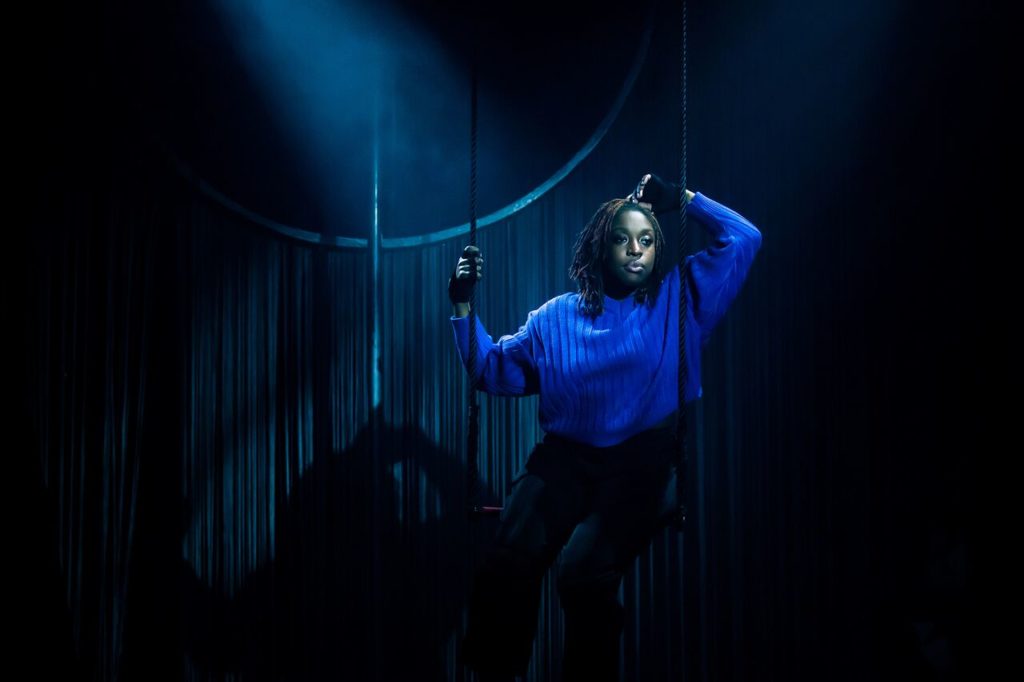 It is often claimed that a mark of good ensemble theatre is the sense of the whole being greater than the sum of its parts. In many ways, this is true of Hole too, especially when it comes to the cumulative talents of this all-female collaborative undertaking. However, there is also a troubling feeling here of the multitude of abstract text-based ideas not quite gelling together to form a coherent meaning that a theatre audience usually craves. 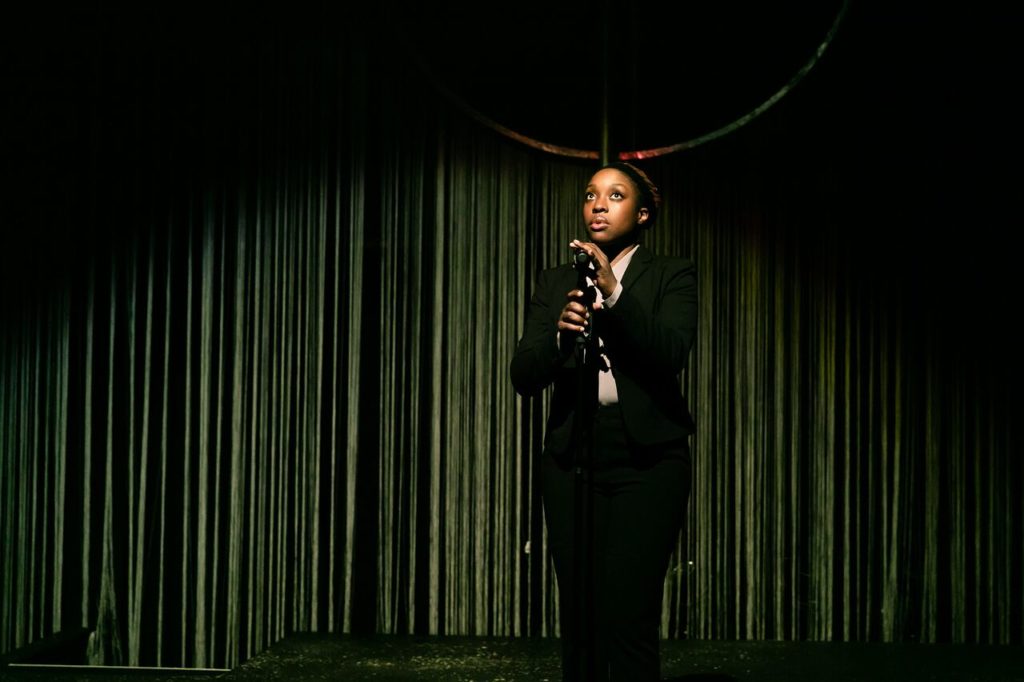 Kendrick’s playwriting debut is a stab at a conceptual postdramatic textuality that would be seen as highly commendable and potentially world-changing in a British new writing lab or on a UK university course. It draws on multiple meanings of the word “hole” (and its homonym “whole”) to explore the condition of womanhood through its (specifically Western) mythical history in a choric fashion. Thematically, it could even be interpreted as a multi-dimensional quest for a personal voice. 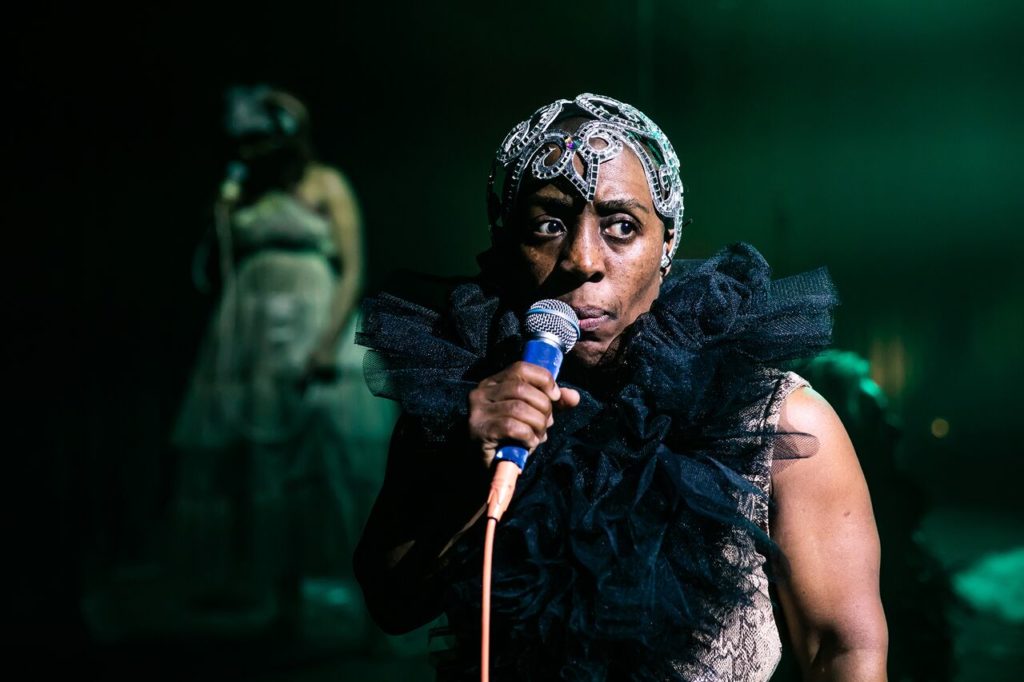 Goalen and Greenland do their utmost to find an exciting, jazzy, and dramaturgically sound stage rendition of these ideas. They lead the ensemble with gusto while also working hard to excavate from within the inner depths of the text, and display on stage, some truly mesmerizing imagery. However, the sense of an organic interdependence of text and performance that is normally characteristic of Rash Dash’s work is missing here. So is, perhaps rightly, the regie-theatre approach that would deploy the directorial authorial logic to complement, fix holes, and make sense of a type of text that this one aims to be. 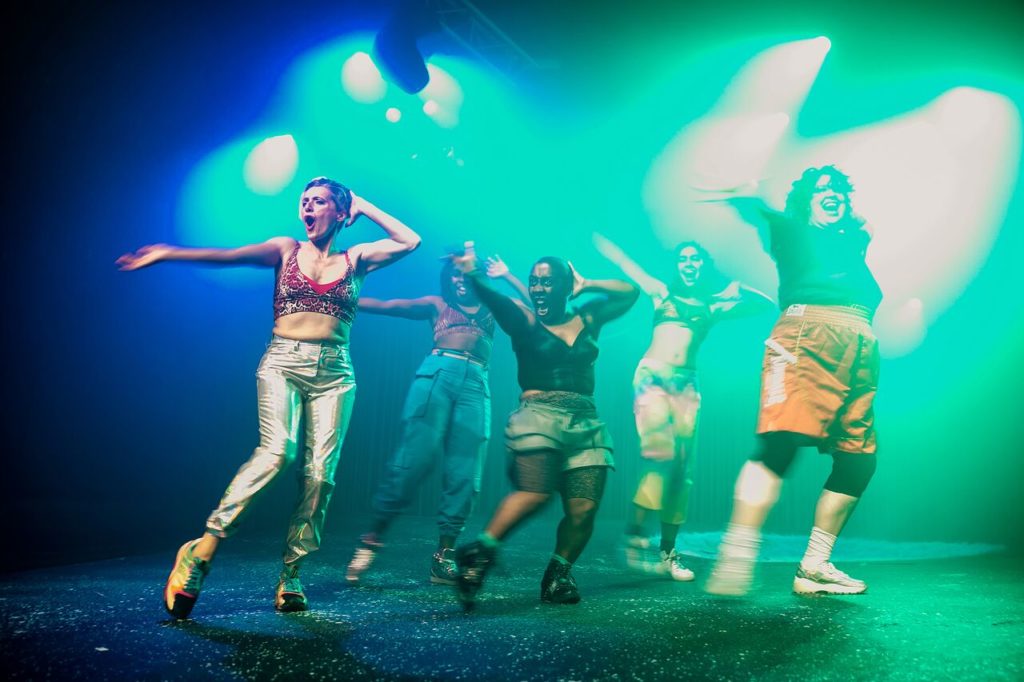 Ensemble Photo: The Other Richard

All in all, this is a case of potent ideas, remarkable talents and admirable intentions driving a piece of work that might also have benefited from a longer-term collaboration, better integration, and more sustained development. But maybe this is only a long-awaited beginning of something deep, promising and radically different, that needs to take its time to grow. 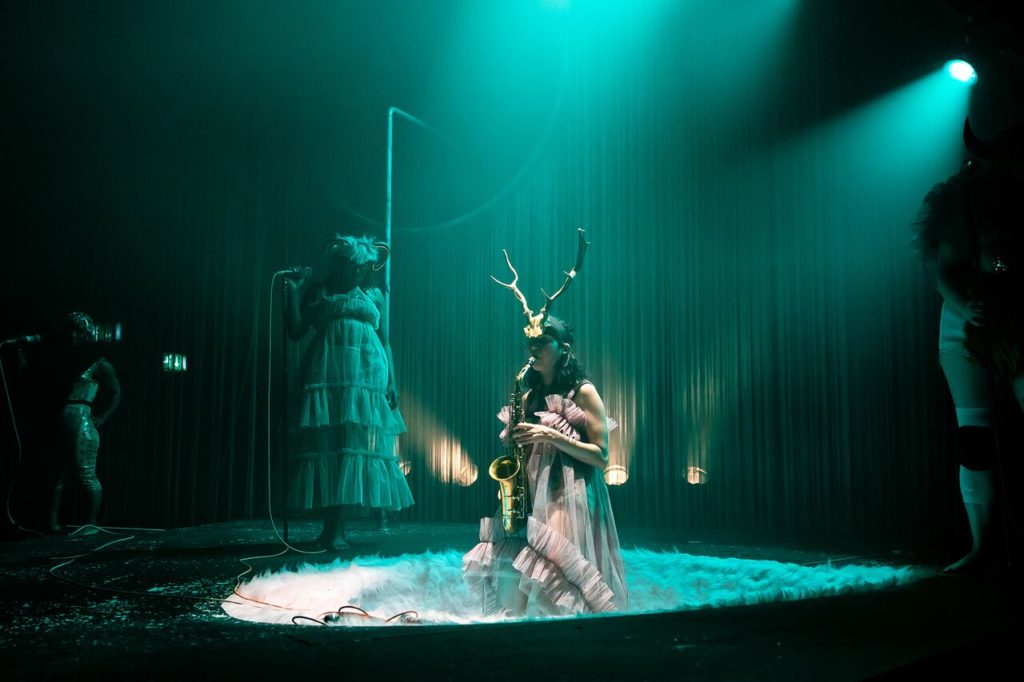