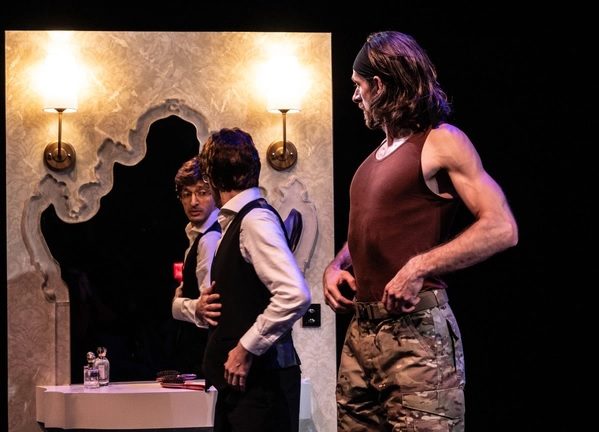 The historic Abrons Arts Center on New York’s Lower East Side is the setting of a dynamic production by the Eclipses Group Theater New York called Hercules: In Search Of A Hero. Eclipses’ stated mission is to promote Greek arts and culture in New York City, with an emphasis on performing arts and literature. Their current offering is a mashup of Euripides’ enduring plays Alcestis and Hercules. Director Ioanna Katsarou states in her director’s note that 95% of the text is derived directly from these two plays. With that sturdy foundation, Katsarou constructs an invigorating performance that fits squarely in with the contemporary genre of experimental theater based on boldly reimagined classical texts.

The evening begins with a mother’s voice attempting to soothe her child in darkness. Soon, the pair is projected onto an upstage screen in stark but pleasing black and white. The minimal set comprises a bed covered with white sheets and pillows and a stenciled vanity, the latter pivoting to reveal the amusingly titled “Bar Hades.” A blonde voluptuary is the first performer to appear onstage and remains a memorable presence throughout the concise, 75 minute evening. She is the Goddess, a fearsome presence, alternately laughing and staring down various audience members in a suggestive manner. Her wavy, impossibly blonde hair, and sinuous figure clad in a sleek black crepe dress, Alexandra Skendrou is a commanding figure whose energy is barely contained by the confines of the Abrons upstairs stage.

In Hercules Alcestis makes the brave decision to die in place of her weak husband. Thus she is a character of pro-feminist strength whose husband owes his life to her selfless heroism. The strong woman making unrewarded sacrifices for her husband is the primary theme of the evening. Soon an alluring young female figure appears in a cream colored muslin dress, reclining provocatively on the bed. Later, the humble bar keep arrives, barely verbal, who sustains taunts from first Alecestis and later Hercules himself. The actors are consistently focused and committed and well cast. Luke Couzens plays Hercules as a driven yet flawed man and like Skendrou is a striking figure, in his case a tall young man with a muscular physique akin to those granite sculptures found in the Metropolitan Museum of Art. Rounding out the cast are astute supporting players Helena Farhi, Demetri Bonaros, and Luisa Alarcón.

The production utilizes its minimal scenery and black and white costumes well and the implementation of occasional film projections of the mother and child are particularly memorable. Film or video projections are often used to disorienting effect in contemporary theatre. Here, director Katsarou chooses to evoke nostalgia and intimacy, a sort of hybrid of mid-20th-century film auteurs such as French New Wave directors and Ingmar Bergman with their emphasis on intimate relationships shot in closeup. There’s even a sense of home moviemaking about them. Katsarou likewise employs lighting design to memorable effect, never distracting, always augmenting the action. The performance likewise highlights the literary provenance of the text by dividing the evening into chapters, with numbers and chapter titles projected onto the screen throughout the evening. The lighting is overall nuanced, as is the music.

Due to the narrative rich nature of classic Greek drama, much of the action occurs offstage, with characters recounting major events via monologue to generally potent impact. The dynamic staging renders these monologues captivating and compelling. One minor quibble is the decision to dim the lighting for Chapter 7, a lengthy monologue that has the effect of dulling the impact of an otherwise informative scene. More illumination or movement or both would doubtless render this scene more dynamic. The climactic scene featuring Hercules bursting onstage, breathless and bloodied, is lit like a Caravaggio painting, the better to highlight Couzens’ barechested musculature, slathered in stage blood, sweating and heaving. This scene renders the evening’s most memorable imagery.

The creative team succeeds in synchronizing their various components effectively, with credit due to costume designer Marina Gkoumla, set designer Christos Alexandridis, lighting designer Christina Watanabe, composer Costas Baltazanis, and videographer Alex Agisilaou. Hercules offers a refreshing interpretation of a classical text in contemporary experimental terms yet its relatively minimal presentation manages to highlight the acting and otherwise eschew the decorative flourishes that often dazzle but seldom prove transportive. Katsarou is a master of restraint and this disciplined approach to Hercules expertly serves both the text and the actors. 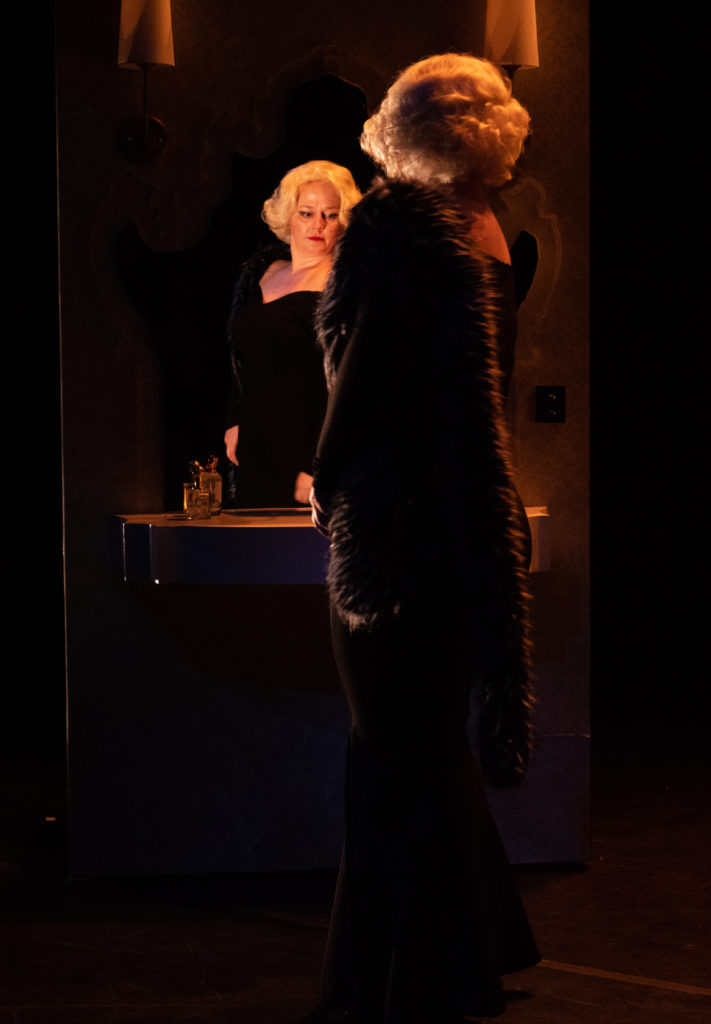 Alexandra Skendrou in Hercules: In Search Of A Hero. Photo by Selim Cayligil.

Hercules: In Search Of A Hero is at the Abrons Art Center, 466 Grand Street, in New York City. 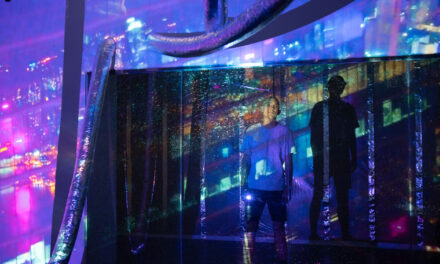