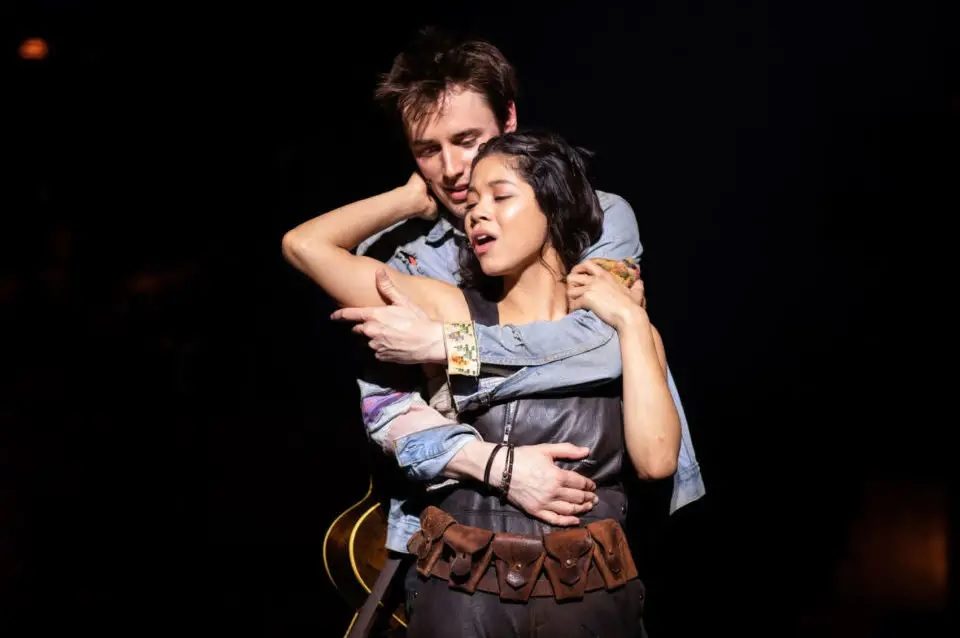 When the lights go out for the interval midway through Hadestown, I’m already making a mental list of friends I must text after the show, telling them how much they’d surely love it. Don’t be put off by the cringe-worthy phrase “folk opera,” I’ll advise them–the merry influence of New Orleans jazz means there’s no introverted shoegazing here.

And don’t be intimidated if you know nothing about the ancient Greek myths of Orpheus (played by Reeve Carney) and Eurydice (Eva Noblezada), the lead characters in this new musical by Anaïs Mitchell.

The tale of their love and the musical prophet’s attempt to rescue his nymph from the underworld will no doubt resonate more if you’ve read Virgil or Ovid. But the plot is straightforward and you can’t miss the modern themes–especially in Why We Build The Wall, incredibly written before Donald Trump and his Mexico policy had become a concern.

Nor do you need to be a devotee of Mitchell’s 2010 album, featuring Bon Iver, which this production has evolved from. As a newcomer to the Hadestown phenomenon, I quickly feel part of the cult, cast under its spell of young love and joie de vivre even in troubled times. 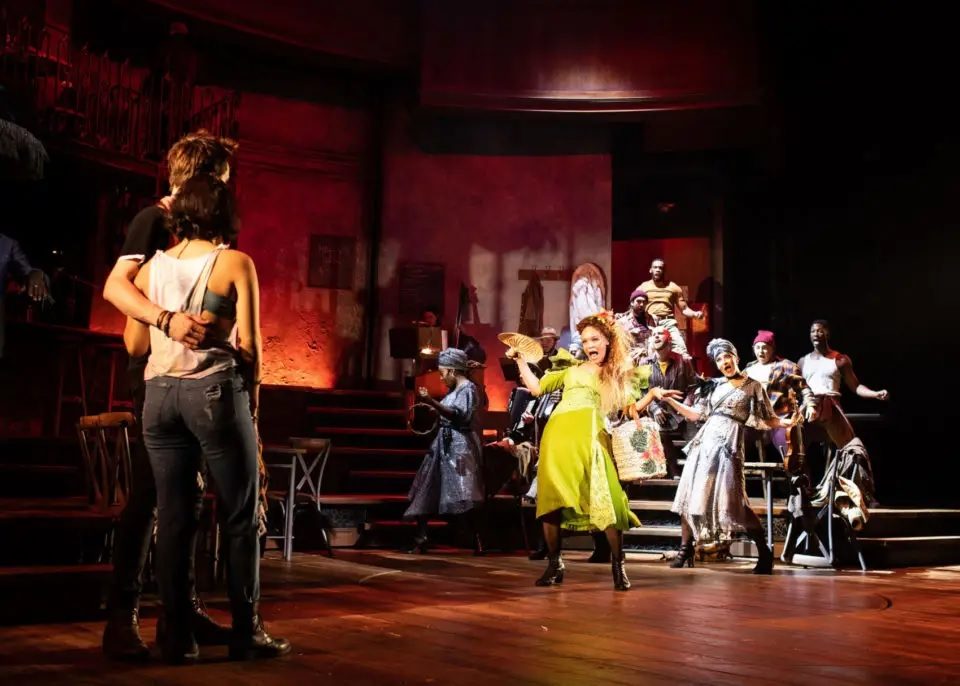 For the first half of Hadestown, there’s not a moment for the mind to wander–all hits and no filler.

By the time the cast takes a standing ovation, though, this might not be quite the triumph the first half promised. 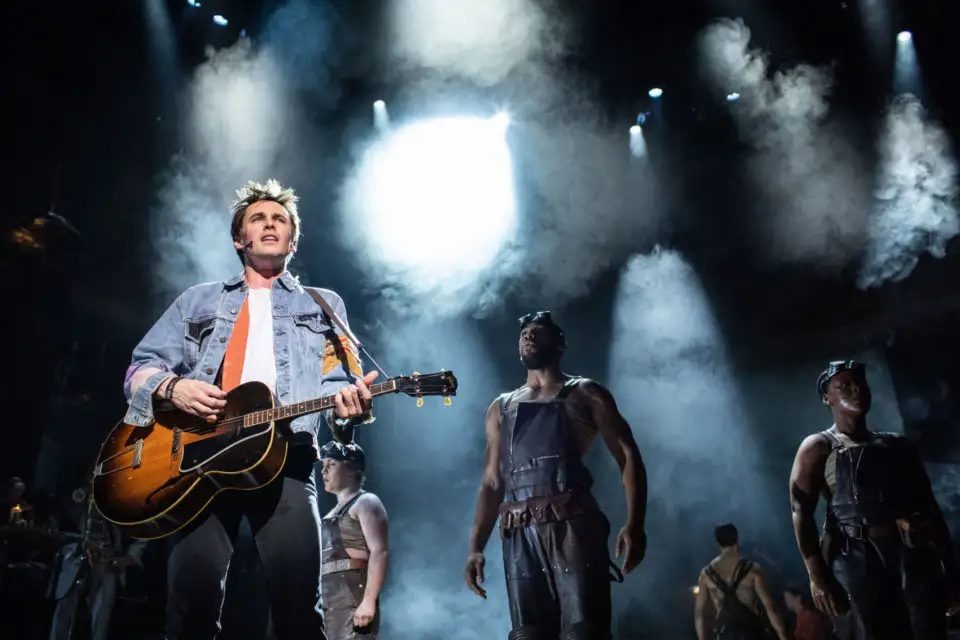 It’s the chemistry of the lead couple that brings things to life early on, thanks to intimate choreography. The way their bodies move and react to one another screams desire. But when the pair are separated in the second half, the energy flags. I began to yearn for some more specific characterization or narrative amid the broad-brush symbolism.

Carney, dressed like James Dean’s earnest younger brother, can certainly sing. Yet it would take the rare vocal ability of a Jeff Buckley to really do justice to his part’s copious high notes. 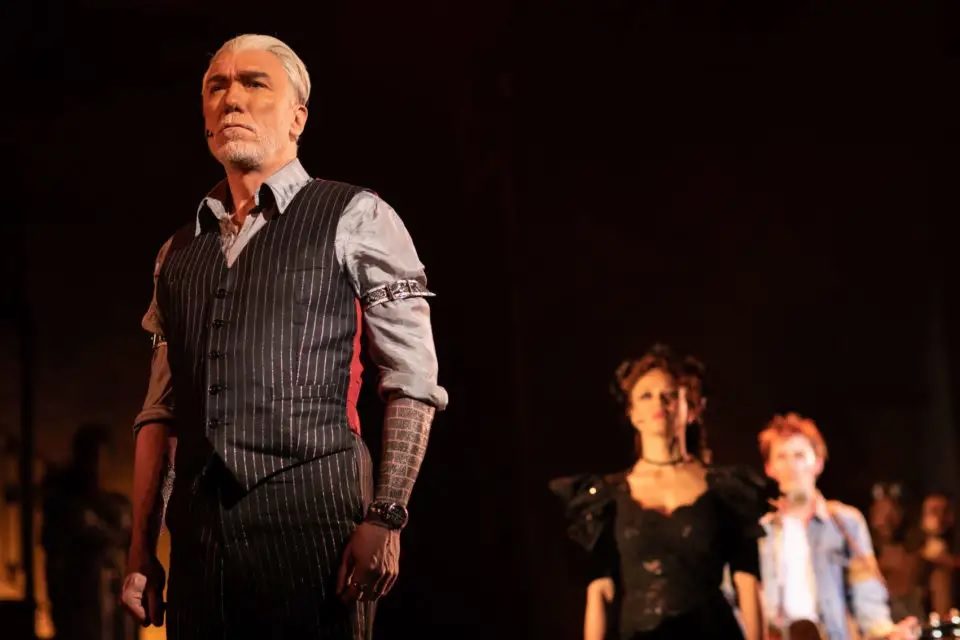 These caveats cannot detract from the spectacle, however.

Noblezada is a fresh star to be excited about. The exuberant dancing from the whole cast is given extra dynamism by an imaginative stage of counter-rotating rings. And the warm-hearted songs happily remain in my head the next morning.

Credit must also go to Patrick Page–playing Hades in the spirit of Charles Foster Kane–for producing bass notes so fantastically low that at times he could be auditioning as the “Voice of the Mysterons” in Captain Scarlet.

Though not the masterpiece it could be, Hadestown is a dazzling party for Americana fans.

You’ll struggle to find more joy in a musical this year.

This article first appeared in iNews on November 14, 2018, and has been reposted with permission.