"Cartas à Madame Satã ou Me desespero sem notícias suas" (Letters to Madam Satan or I Get Desperate Without News from You), solo performance by Sidney Santiago.

During the Rio 2016 Olympic Games season, the Centro de Artes Cênicas (Performing Arts Center) of the Fundação Nacional de Artes (National Arts Foundation) held in its three Rio-based theatres a peculiar cultural event. It was not a festival: it was a Festival of Festivals.

Through public project selection, Funarte devoted to this action R$ 1,9 million (R$ 200 thousand for each selected theatre). The execution of Mostra Funarte de Festivais – Circo, Dança e Teatro (Funarte Festivals Showcase – Circus, Dance and Theatre) was designed to give visibility to the important artistic network constituted by national and international performing arts festivals, spread all over the country.

Mostra Funarte de Festivais took place in three venues: ENC – Escola Nacional de Circo (National Circus School), Dulcina Theatre and Cacilda Becker Theatre. It reunited nine different Festivals from several Brazilian states, which filled the Olympic City with circus, dance and theatre showcases, mixed with conferences and workshop. A book of theatre plays was also released. It was a breathtaking programme – and taking a step ahead, each and every activity had free entrance.

The ENC’s closing programme was the comical female festival Esse Monte de Mulher Palhaça (These Bunch of Women Clowning Around, an allusion to one of the synonyms to being funny in Portuguese), with several women showing the power of a good laugh. Running from August 13-18th, the all-female clown group As Marias da Graça, hosted a high-quality, energy-filled event, inviting almost twenty first-class female clowns from all Brazilian regions, from Central Amazonian Kandura (Selma Bustamante’s character) to extreme South artist Marmotta (Lia Motta’s character). There were also three workshops – Dramaturgy and Comicality, given by Ana Piu and Herica Veryano; Essential Clowning and the Sacred Feminine, by Antonia Vilarinho, and a Classical Clowning workshop by Val de Carvalho.

At Cacilda Becker Theatre, two theatre festivals launched a Rio edition, each one being carefully designed to fit the unique moment lived by the city of the Games.

Black Theatre Festival, Olonadé, in its fourth edition, attempts to instigate the creation of an Afro-Brazilian dramaturgy, along with the promotion of plays and productions valuing and spreading the afro culture. Presented and managed by Companhia dos Comuns, the 2016 edition of Olonadé Festival celebrated actress Ruth de Souza on her 70th birthday.

From the August 9th to the 14th, billboards highlighted shows written and performed by black artists. Among quite poetic works were Signos (Signs), by Cia Rubens Barbot Teatro de Dança; Pele (Skin), by Companhia Laboratório de Arte Negra em Movimento; Engravidei, pari cavalos e aprendi a voar sem asas (I Got Pregnant, Gave Birth to Horses and Learned How to Fly Without Wings), with Lucélia Sérgio, by Cia Os Crespos. Also by  thesame company, Cartas à Madame Satã ou Me desespero sem notícias suas (Letters to Madam Satan or I Get Desperate Without News from You), a solo by Sidney Santiago, and Meia-noite (Midnight), a solo by Pernambucan artist Orun Santana.

A highlight of Olonadé Festival was certainly the monologue Vaga Carne (Vague Flesh, in an approximate translation), written, directed and performed by Grace Passô, multi-prized (and praised) as one of the most important contemporary theatre artists in Brazil. The monologue relates the journey of an errand voice, which can take over any type of matter, gas, liquid or solid, that ends up trapped inside the body of the woman that performs for us.

The northeastern state of Pernambuco presented a special edition of the festival Janeiro de Grandes Espetáculos (January of Great Performances). The festival, wich dates back a long way, ran from August 23rd to 28th. Taking accessibility as an issue, the Mostra Acessível Rio das Olimpíadas (Accessible Showcase Olympics Rio) established an interesting dialogue with the Paralympics: all five shows have disabled and non-disabled artists mingling on stage. 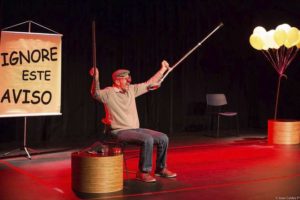 Se fosse fácil, não teria graça (If It Was Easy, It Wouldn’t Be Fun), by Nando Bolognesi. Photo: João Caldas.

Opening with a deep and touching solo from a 45-year old clown-actor Nando Bolognesi, the play Se fosse fácil, não teria graça (If It Was Easy, It Wouldn’t Be Fun) is based on his autobiographical book Um palhaço na boca do vulcão (A Clown at the Volcano´s Mouth, not published in English). Bolognesi defines it as the “very first sit-down-tragedy,” as opposition to the more and more omnipresent stand-up-comedy numbers in Brazil. Nando Bolognesi shares with us his journey after being diagnosed with multiple sclerosis – what, in his words, helped his discovery of the language of the clown: “The clown is that misfit guy. Well, that´s me!” Wheelchair user, Bolognesi has a small moment during the show in which he stands and introduces us to Comendador, the Clown. While telling us his very own story, he makes the audience cry and laugh – sometimes at the same time.

The dance company Giradança came with two shows: Sem conservantes (No Conservatives) and Proibido elefantes (Elephants Not Allowed). The amazing dancers are clearly comfortable in their own bodies, turning the stage into a celebration of diversity, energy, and potential.

Pulsar Companhia de Dança presented Indefinidamente indivisível (Indefinetely Indivisible), having change and risk as movement inspiration. Closing the showcase, Grupo Ninho de Teatro brought Marcos Barbosa´s play Avental todo sujo de ovo (Egg-Stained Apron), telling the disturbing tale of a 19-year long wait for a son. Throwing the casting rules away, a young actor plays the role of someone very older, a cisgender woman plays the part of a transsexual woman, and the disabled artist does not have his condition put into discussion.

This post was written by Eva Miranda and Katy Serudo. 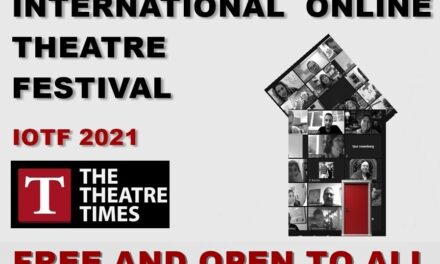