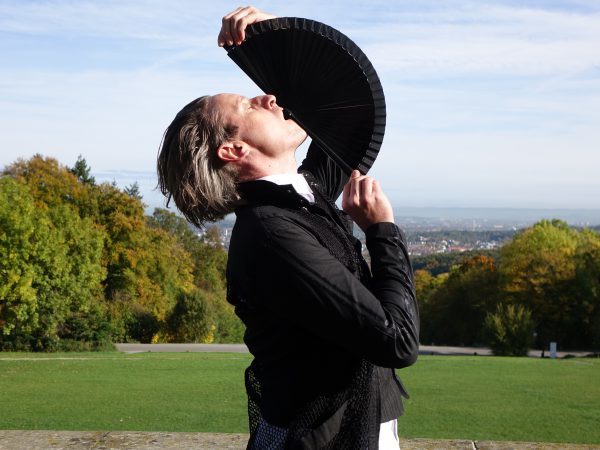 The Serbian choreographer, performance artist, and stage director Milos Sofrenovic has been at Solitude since September in cooperation with Literaturhaus Stuttgart. He worked on the development of the performative essay (De)signing Time, which was presented at Literaturhaus Stuttgart on October 15 at 8 pm. The performance was presented LIVE only once to an international audience. The ephemeral event is followed by this performative post, a contribution that hints, but never reveals everything.

It may seem in direct contradiction with the “temporal matter” of a live performance, but is actually not. Months of preparation for a show that will take place only once is, for me, in direct relation to the burning matters of our present day society (both the European one that I am part of & the wider one globally speaking) where we have pressing social issues affecting us all on a daily basis & require immediate (re)actions–we only get one chance to really go for an authentic change, improvement, reconstruction of the reality we are all part of. Our civilization is running out of time & the option of “REPLAY” unfortunately belongs only to the virtual world that, however big a part of our daily life it may be, IS NOT LIFE ITSELF.
Milos Sofrenovic

Stefanie Bäuerle: At the moment, the question of identity and therefore also home and origin is omnipresent. Which political dimension do your performances have? Are they also an attempt to get closer to the observer or is the individual supposed to be thrown back on the self and identity?

Milos Sofrenovic: For my performance practice, the year 2017 kicked off a fresh chapter through a new cycle of works–including collaborations with new fellow stage directors, choreographers, composers, visual artists, and others–titled The Politics Of Movement: On Reinterpretation Of Power. Two full evening solo stage performances have already been created under this “umbrella.”

In April 2017, I was commissioned by NOMUS International Music Festival in Novi Sad, Serbia, to create a first work from this new cycle. I decided to establish a dialogue with infamous The Rite Of Spring by Igor Stravinsky, in my version titled On The Acceptance Of Imperfection: The Rite of Stravinsky. The concept for this performance already relates to your question of “political dimension of my work” and “my relationship to audience members.” In the manner of how philosophy (philosophical practice) operates in general, I am also interested in posing questions more than proclaiming answers in my practice. I honestly think that a good question carries a great value in itself.

This work posed the following questions in its program notes:

Of course the questions establish a necessary bond between an author and audience members. What comes out of this interaction is what in my opinion art practice should be about–DIALOGUE in all its facets.

(De)signing Time: Performative Essay In Motion is the second project from the new cycle of works, developed and completed during the assigned two-month fellowship period (September–October 2017), in the frame of cooperation between Literaturhaus Stuttgart and Akademie Schloss Solitude. Its final presentation took place on October 14, 2017, during the presentation of a festival called Herkunftssache (issue of origin).

SB: The title of your current performative essay is (De)signing Time. How is it to be interpreted? Different verbal and physical forms of expression, for example, dance, literature, fashion, and film, influence your performances. Which share do they have in the “design” of identity and time, and how are they related to each other?

MS: An international project The Matter Of Origin at Literaturhaus Stuttgart states in its program: “Questions of origin cannot, however, be reduced to one’s social category, but are always intertwined with ethnic, cultural, or gender-specific attributions.”

(De)signing Time: Performative Essay In Motion is an attempt of an artist (myself) to establish a dialogue between his PAST–his own origin in all its facets (social, ethnic, cultural, gender specific) and his FUTURE–his own investigation of both utopian and dystopian qualities of the society at large. The outcome of this dialogue should define and therefore (de)sign more clearly his PRESENT time–the current position from which he is able to act more thoroughly through his art practice toward a better existence on multiple levels.

We live in the historical moment in which each of us must somehow contribute to the possible improvement of the collapse of humanity on the global level. In my opinion, the twenty-first century serves as a perfect example of the outcomes of the industrial revolution that so enthusiastically opened the gates of the twentieth century, but then things really got out of control (e.g. economically and environmentally.)

Yes, my work always combines movement, acting, conceptual art, literature, video, music, and so on. I do consciously apply the Wagnerian concept of the Gesamtkunstwerk, where equal attention is given to each aspect of stage work resulting in a stronger final impact of the message conveyed.

We can all SIGN ourselves in time or, better said, leave a SIGNATURE of our existence in time, right? More actively contributing to the society we are part of–not only blindly following given orders, but also questioning them–as a result, gives us a much more creative position of Designing Our Own Time or Existence to our best possible ability. The prefix (de) can be also affiliated to making DEcisions, DEconstructing inherited social concepts, DEvising better formats of social behavior.

SB: Part of (De)signing Time: Performative Essay In Motion is a small collection of special objects like binoculars, blue balloons, a feather, and a hand fan you perform with. What role do they play for your work? 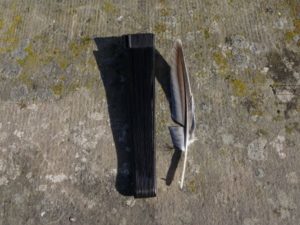 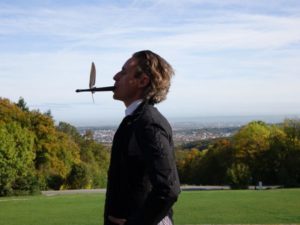 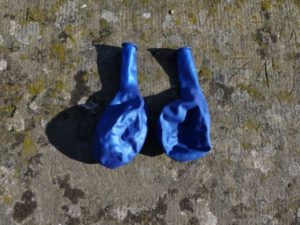 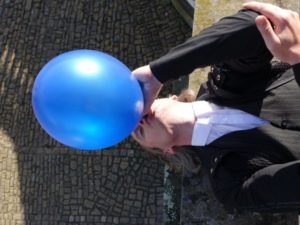 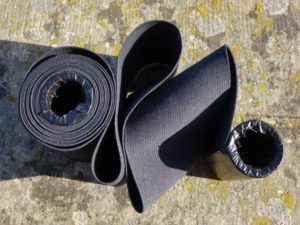 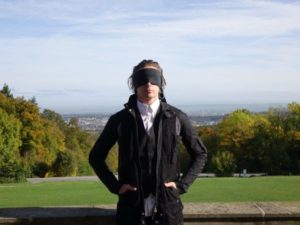 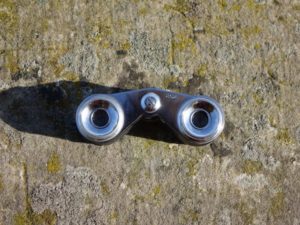 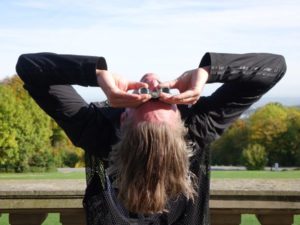 MS: On the matter of using props:

SB: “Choreodrama,” “Performing essay” …you are often combining literature and dance and therefore also play with two sign systems. In what way are they related for you? Do you see dance or performance as a language, or language as a way of performing

MS: If we reduce things to basic human behavioral patterns, we always exist on two levels–those of verbal communication, meaning spoken or written words; and physical communication, meaning gestures or physical actions. That notion made me apply the same inseparable relation of two categories of communication as my “stage tools.” There is also something very interesting in investigating the physical qualities of words; for example, words are also graphic signs, not only carriers of meaning.

I was partly inspired in my career by Peter Handke’s concept of Speak-Ins (Sprechstucke), where the words of the Speak-Ins don’t point at the world as something lying outside the words, but to the world in the words themselves. Through my work I also attempt to reaffirm the notion of the corporeal instrument (the body) as the self-sufficient entity or reality that can speak and communicate through its mode of the silent speech; the reality that gives birth to the authentic language that moves in order to speak and that speaks while it moves.

SB: In the (De)signing Time trailer, you cite Aldous Huxley, who says that men need intelligence to love and to reach for freedom. Doesn’t this contradict a child’s blessed innocence when that child’s reflectiveness isn’t yet developed, according to Handke? Or does this go along with a general difference between script and body language?

MS: Let me say first that the (De)signing Time trailer depicts five quotations by five authors in the following order:

This is also the order of five scenes/structural building blocks of the whole performance (De)signing Time: Performative Essay In Motion. Quotations are also part of the larger texts the audience members will be experiencing on the night of the performance through the audio and video sections of my stage work. In brackets, you see the year of publication of each of the larger texts used. Basically, the whole twentieth century is covered from its early decades, the middle part and toward its last decade. For me personally, the experience of the twentieth century is still a larger part of my life experience, therefore I also refer to it in my work.

If we also bring this conversation back to the diversity and complexity of human identity, I would say that five keywords that are also part of the stage design for this production articulate my attempt to go beyond the level of intellectual terms excluding each other or going beyond contradictions toward coexistence of terms.

SB: This structural contradiction can also be seen on the content level: In the oeuvres of Marcel Proust and Virginia Woolf that you quote, the narrating subject and its detachment from its surroundings are put into the foreground. How can such literary references help to experience identity and precisely not to propagate the abyss between society and individual?

MS: I disagree. I do not operate here through structural contradictions, but through structural co-existences. I think that art has this luxurious position of always seeking new interconnections. For example, how can we gather Virginia Woolf, Peter Handke, Aldous Huxley, Marcel Proust, and Wim Wenders in one performance–five very distinctive “thinking sensibilities” and make that diversity of sensibilities tackle the same notion of Identity in all its facets of complexity from different angles.

Also, these five authors are direct traces and evidences of reoccurring themes of twentieth-century thought and are therefore also part of the heritage that we brought with us into the twenty-first century. They tackle similar issues in very individual ways. Isn’t that what identity should be about? Strong individual voices pondering the reality we are part of in the most diverse manners. Peter Handke once said: “It is often less important to revolutionize and more important to make aware.”

That is exactly what my mission is about–to try to soften the demarcation line between society and an individual through art practice. Also to underline the importance of the process maybe even more than the end product, and the process engages with all of our set of beliefs.

How much are we aware of what we believe in?

Is our art practice?

A PLACE OF REVELATIONS or A PLACE OF HIDING BEHIND “CONSTRUCTS?” 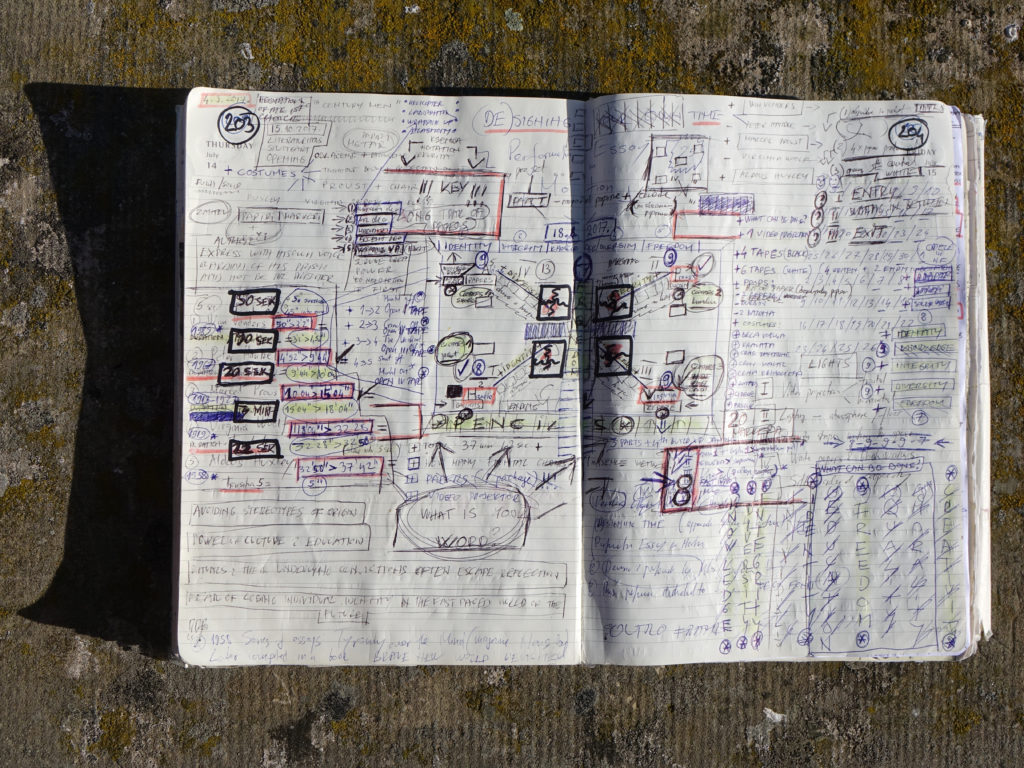 This article originally appeared in Schloss-Post on October 14, 2017, and has been reposted with permission. 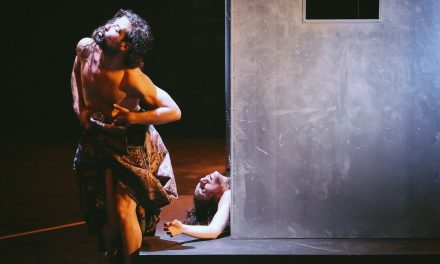 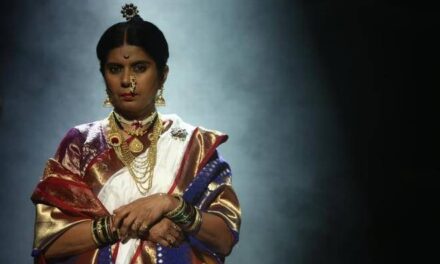 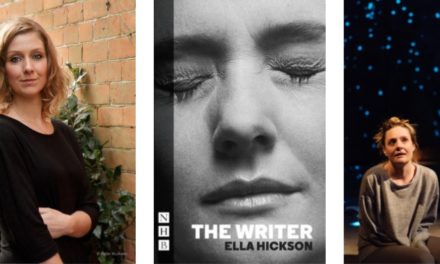