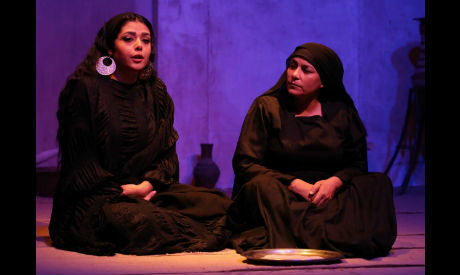 Photo courtesy of the original article.

Based on the novel by Egyptian writer Yahya Taher Abdullah (1938-1981), the play was adapted for the stage by Sameh Mahran.

Collar and Bracelet is a production by Cairo’s Taleya Theatre operating under the Theatre Artistic House, which is part of the Ministry of Culture.

The play was first staged during the 8th Cairo International Festival for Experimental Theatre (1996), where Abdel-Moneim won the best director award. The show was reproduced in 2018 within the silver jubilee of the experimental theatre festival.

Most recently, the play won the Sultan bin Muhammad Al-Qasimi award during the Arab Theatre Festival held in Sharjah (January 2019). It was then staged within the National Theatre Festival in Cairo (August 2019). Cast and crew of Collar and Bracelet after their win in Carthage. Photo: courtesy of the Cultural Production Sector.

The events of Collar and Bracelet take place in Upper Egypt where an impoverished family becomes prey to popular myths.

The play’s music arrangement is by Gamal Rashad featuring the rababa player Ibrahim El-Qet and his ensemble. The scenography is by Mohie Fahmy and the costumes are by Naeema Agamy.

Following its win in Carthage, Khaled Galal, head of Cultural Production Sector, congratulated the Collar and Bracelet’s team stating that this award being the second international award for the play this year testifies to “Egypt being on the right theatrical track.”

Carthage Theater Days (Journées théâtrales de Carthage, JTC) is a theatre festival founded in 1983 and was previously held every other year in Tunisia, alternating with the Carthage Cinema Days from 1983. Since 2015, the JTC has been held annually.

This year, the JTC’s 21st edition took place between 7 and 15 December.

This article was originally posted at http://english.ahram.org.eg on December 16th, 2019 and has been reposted with permission. To read the original article, click here.