“Dust” At D-CAF: An Operatic Dystopia With An Environmental Message 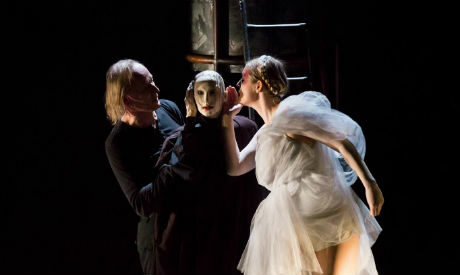 From Denmark to Cairo’s D-Caf Festival, Dust by Sew Flunk Fury Wit presents a blend of opera and puppet theatre to imagine life after a climate catastrophe

There are small bells placed on each seat when we enter the Falaki Theatre to watch Dust, a theatre performance by the Danish company Sew Flunk Fury Wit (SFFW) performed on March 30 and 31.

The accidental tinkling of the bells as people shift in their seats is enough to create a rippling harmony that spreads an eerie sense of unease and otherworldliness–a taste of what is about to unfold on stage.

Dust presents a dystopian future scenario, set in the aftermath of the impending global climate catastrophe when the world we know today will have turned barren and death-ridden.

The performance combines opera with neo-puppetry and contemporary movement to tell a warning tale of a time after time; a time when “the trees are dark and blind, the bees have lost their way.”

This unique blend of mediums allowed Svend E. Kristensen, artistic director of SFFW, to present an issue he felt strongly about without being too direct and preachy.

“Climate change is a very pressing subject in the world today, and in Europe, there is more and more talk about the measures we need to take to avoid it,” Kristensen says.

The drama helps–or rather forces–us to visualize this grim future through minimal, striking imagery that dances on the border between violence and poignancy. 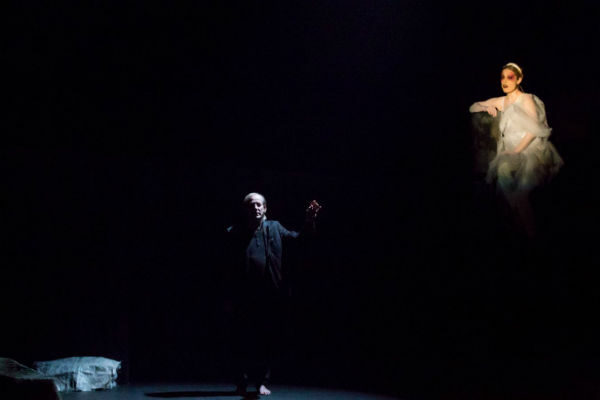 Regina Unnur Olafsdottir and Kristensen star in the play as the Moon and the Shadow, she an angelic soprano in a white silk dress, and he a gruff baritone in a casual black outfit.

The set is simple; on the right is a high structure where the Moon sits as if on a throne, and a large pile of black dust spread below. On the left is the naked bark of a tree, beneath which lie ruins and broken pieces of cement where there should be soil.

Shadow assists the fallen bodies in telling their stories by animating five life-sized silicone puppets: a mother, a child, a priest, a soldier, and a trader. These corpses rise from the earth to retell their tragedy in song.

From top to bottom, the puppets get less and less realistic. Their silicon heads are life-like in shape and texture, then their bodies are an amalgam of textures and shapes, and their lower torso completely dissolves into shards of fabric.

“For a long time, I worked to make the best puppets–ones that are as realistic as possible. When I reached that level, I wanted to change and explore making something new,” Kristensen says.

And so he made these puppets from leftover parts of other creations in his studio.

“These recycled puppets are living in the afterworld,” he adds, explaining how the process suited the post-apocalyptic theme for Dust.

We sometimes briefly forget that Shadow is moving these strange zombies, but he never truly dissolves into the darkness. Sometimes he evades attention and allows the puppet to have the spotlight, while other times he is present alongside it and sympathizing with the puppet’s story like a friend.

The main characters shapeshift as they tell the story of earth’s destruction, role-playing when an endless night is all that remains.

The fourth wall is broken, once by the performers and another time by the audience when they start chiming in with their own bells when Moon uses hers.

Light and dark, story and song

On his choice of characters, Kristensen says Moon and the Shadow “have seen it all unfold, so they made this ritual to replay it to humanity.”

Moon is like an enchantress, but her eyes, encircled by a red halo of eye-shadow, suggest she is not quite angelic. Her sharp actions and occasional mischievous laugh contrast with her gentle appearance to make her a layered and intriguing character till the end.

We never quite know what to expect of her, as she shifts from being all-knowing and in control to cowering in her high tower.

Shadow is more childlike in his quick movements, he follows moon like an obedient disciple.

Together they are meant to represent light and dark, although both are creatures of the night.

“We go together like story and song,” Shadow tells Moon.

For a long time, Kristensen wanted to combine opera with puppetry, something he also presents in another current show titled Crash.

“I think together they make a very powerful hybrid. I like when in an opera someone sings and you can feel it down the spine,” he tells Ahram Online.

In Dust, the music blends elements of classical music and opera with pop and rock. A soundtrack by Peter Kohlmetz Møller takes us on a parallel journey, from heavy drums to a light harp.

The pace of the performance is sometimes slow, and may not be for everyone, but the music is the strongest aspect that carries it through and moves us to engage and care.

“Classical singing isn’t just opera, so this is a great introduction for young people to opera,” singer and actress Olafsdottir says during an interview.

The lyrics are written in English by Neill Cardinal Furio, with richly poetic riddles that are easy to decipher and follow compared to classical Opera.

One particular song that rings close to the current discourse on climate change is a song where the moon becomes “Beauty” (a hint we get from the Arabic translation.)

“They said I gave them comfort,” she sings about the abuse she endured from humanity as it “raped her” for resources.

While Kristensen had a very clear vision which director Jesper Pedersen helped him realize, puppetry–as with theatre–always has some room for improvising and no two performances are ever identical.

Performing in Cairo for the first time, Kristensen says he was “a little more Arabic,” explaining that while in Tunisia earlier this year he noted the difference in style of Arab puppet theatre versus European.

“I noticed in this region they are more expressive with their face and their movement when they hold their puppets. It’s just a different way of storytelling, and I think I was influenced by it a little when I performed here.”

In shaping the different stories, Kristensen had only to pull from true events of Earth’s darkest events, such as the perilous plight of refugees at sea and Japan’s comfort women of WWII, as well as other tragedies.

“These things have already happened, but they will happen again and all at once in the case of a climate catastrophe,” he says.

A rhyme that Moon and Shadow sing several times throughout the play also echoes this:

Dust doesn’t end on a high note, closing with a final song with the lyrics “today might be a nightmare, but tomorrow may be darker still.”

But the fact that for now, it is only a dystopian play and not yet the reality is hopeful in itself. The real story of Dust is about the present, the greed and denial that blind us from a dangerous future.

Dust was nominated for the special prize at the Danish Reumert Stageart Awards in 2016 and is one of the currently touring acts for Sew Flunk Fury Wit.

This article appeared in Ahram Online on April 7, 2019, and has been reposted with permission. 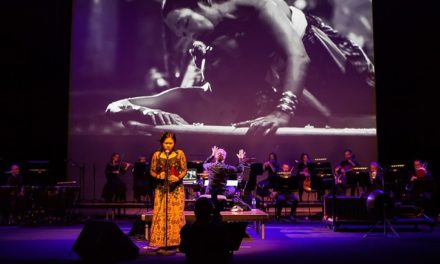