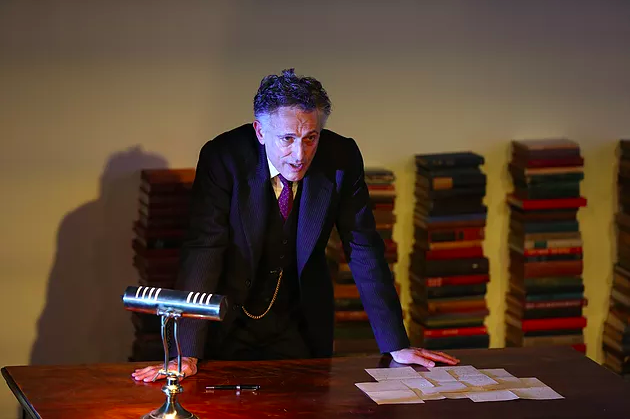 The most interesting question about David Greenspan’s one-man, 6-hour performance of Eugene O’Neill’s Strange Interlude is why an artist of his intelligence, wit, and sophistication would want to do such a thing.

In 1963, reviewing one of the three Broadway productions it has had, Richard Gilman called this 1928 drama “very likely the worst play that has ever been written by a dramatist with a reputation.” Strange Interlude is dramatic literature’s great cautionary lesson in the wages of unbridled bloviation: a 9-act, numbingly prolix, psychologically preposterous, embarrassingly pretentious, drearily melodramatic saga about a woman unhinged with regret about not sleeping with her hunky fiancé before he left to fight and die in World War I.

Early fans (including, ahem, the Pulitzer Prize judges) evidently convinced themselves that the play was cutting edge because it interlaced stream-of-consciousness monologues and confessional soliloquies with conventional dialogue. Psychoanalysis was all the rage in the 1920s and lifting the lid on the unconscious counted as scandalous.

In fact, O’Neill’s hyperventilated inward speech (“I wish she hadn’t told me this . . . it has upset me terribly! … I positively must run home at once.”) didn’t reveal much that wasn’t perfectly clear to close listeners of his soap operatic overt speech (“I saw what a fool I’d been—a guilty fool! So be kind and punish me!”). And the stakes of the endlessly silly story were too obvious and commonplace to justify the epic scale. The gaseous self-indulgence of this work was already mocked in the 1930s—most memorably by Groucho in Animal Crackers (“Pardon me while I have a strange interlude…”).

What, then, did a serious artist like Greenspan see that made him want to go to the trouble of memorizing the whole 200 pages and perform all eight roles of this work himself? Was he a devotee? Did he have novel insights into Strange Interlude and strong convictions about what the rest of us have been missing? These mysteries motivated me to buy a ticket, even though, after enduring the Glenda Jackson Broadway production in 1985, I swore on a stack of clammy Freud lectures that I’d never sit through the play again.

As anticipated, Greenspan is the chief object of fascination. Dressed in a three-piece, pinstriped suit, he moves about a series of sparsely furnished, roughly period rooms talking to himself for all 6 hours. The rooms have been specially built inside the Irondale Center in Brooklyn, an old former church space with a mezzanine used for meal breaks and to seat the audience when Greenspan performs the final two acts atop the rooms’ plywood ceilings. The movement of the audience between acts helps keep the blood circulating and the eyes open.

Greenspan’s skill at distinguishing the characters is a marvel to behold. His vocal and gestural distinctions are stunningly sharp, with slight head movements and the smallest variations of pace and accent accomplishing clear changes of identity. The impression of dialogue is accomplished with gentle twists of the body left and right and sometimes just tiny nods. 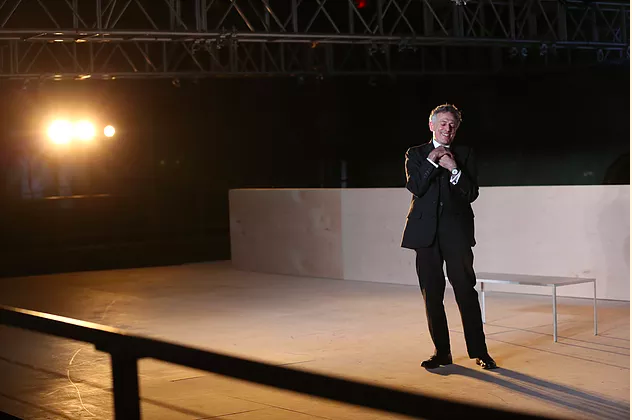 Interestingly, Greenspan uses no special inflections for the asides and soliloquies that he doesn’t also apply to the dialogue. And that is really the chief innovation of the production. He and his director Jack Cummings III have rendered the play’s famous—and famously cloying—distinction between inward and outward speech moot. When the words come from one individual mouth, the entire action becomes an inner monologue. This quality may have been immanent in the original work, but Greenspan makes us focus on it, consider it as a possible essence of this critically unloved text.

The play, here, becomes a melodrama of the soul. We watch Greenspan explore the swollen psychic landscape so devotedly that we cheer him on against our better judgment. He’s on a quest, and quests are captivating. He’s trying to locate some fount of non-platitudinous wisdom in the tale with his signature theatrical approach of public solitude.

He was the guy, remember, who wrote and starred in The Myopia, a 2010 solo show with 22 different roles. His 2007 solo play, The Argument, channeled the remarkable devotion that a particular Greek translator and scholar had to Aristotle. His 1988, HOME Show Pieces featured a man masturbating alone on a bed interrupted by phone calls and a playwright sitting on his apartment toilet fantasizing about fame. It occurred to me at one point during Strange Interlude, watching him gaze upward, trance-like, that the show was a sort of ambulatory séance. Greenspan was contacting the dead on our behalf in the form of characters we’d never properly appreciated and letting them speak, now through him.

I didn’t leave this show with a whole new appreciation for Strange Interlude. I don’t think any intelligent person could. Nevertheless, I don’t regret seeing it because it’s a riveting spectacle of quixotic devotion. For those who’ve never seen O’Neill’s play before and might be curious, let me just say, with confidence, that it doesn’t get any better than this.

This post first appeared on Jonathan Kalb on October 25, 2017 and has been reposted with permission. 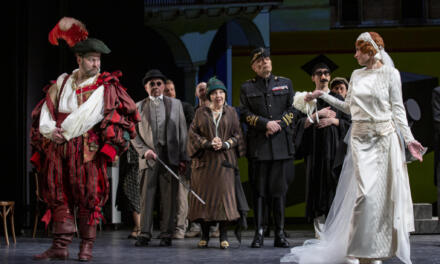