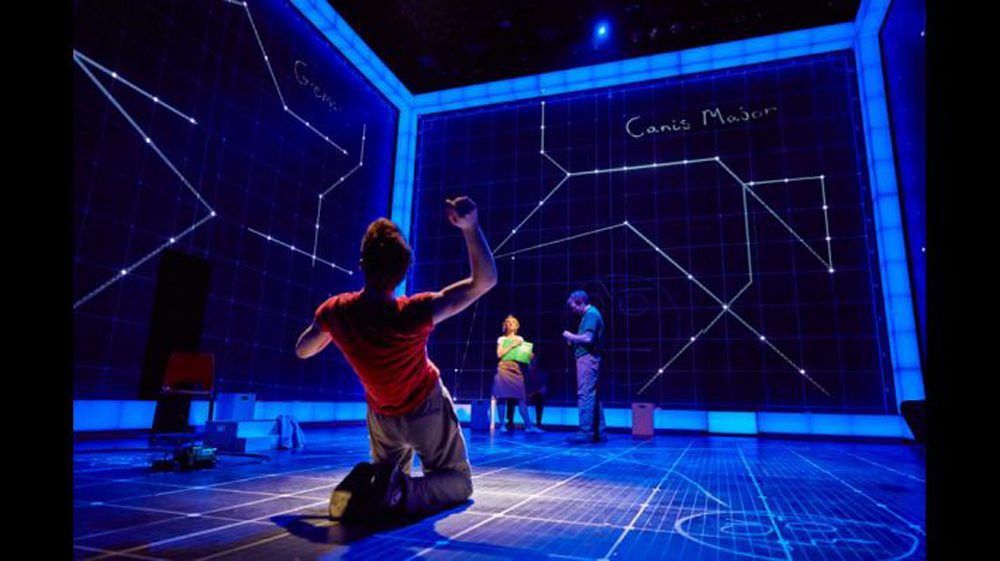 T"he Curious Incident of the Dog in the Night-time." Photo Credit Brinkhoff / Mogenburg

Science is an area of perennial fascination for the theatre. In the past, plays as various as Tom Stoppard’s Arcadia, Michael Frayn’s Copenhagen and, more recently, Nick Payne’s Constellations, have been both cerebral and emotional experiences. Now an adaptation of Mark Haddon’s 2003 bestselling book, The Curious Incident of the Dog in the Night-Time, which opened at the National Theatre in August last year and has now transferred to the West End, takes an enthralling look at both science and the human feelings of a small group of individuals.

As a stage adaptation, written by playwright Simon Stephens, this cult novel has an instant appeal. The story is about Christopher Boone, a 15-year-old with Asperger’s syndrome who has a real talent for maths. When he discovers the neighbor’s dead dog on the lawn, his attempts to find out who killed it involve a murder mystery — inspired by his love for Sherlock Holmes, and enlivened by his inability to tell lies.

With its illustrations of what Christopher is thinking, its evocations of maths, and its sensitive depiction of his condition (which is never really specified), this is a superior stage adaptation. Instead of just transposing the book, Stephens has recreated it for the stage. He thoroughly understands the life of the typical teenager and the conflict between the boy and his father is particularly well sketched out.

Although Christopher is a teenager who cannot tell lies and is uncomfortable with metaphors because he pictures their meaning literally, this stage version uses lots of visual tricks and stage metaphors to tell its moving story. There are references by his special needs teacher, Siobhan, to his writing his own version of events and to the possibility of creating a play out of them, and this metatheatrical slant yields a couple of good jokes.

There are also discussions of cosmology, of being an astronaut and examples of Christopher’s amazing ability to absorb information. When he talks to the local vicar about God, his naive questions about the precise location of Heaven are an implicit criticism of belief as well as an illustration of his inability to imagine a spiritual world. His condition makes him literal as well as logical. And Luke Treadaway as Christopher delivers an engrossing performance, full of awkward gaucheness. He comes across convincingly as a naive boy wise beyond his years.

As expertly directed by Marianne Elliott, and beautifully designed by Bunny Christie, this a play where the stage is often invaded by projections of algebra and mathematical symbols. With movement by Frantic Assembly’s Scott Graham and Steven Hoggett, the show illustrates how Christopher’s path through life rarely runs smooth. For him, everyday life can seem a bit chaotic — and this feeling is brilliantly represented with projected grids, often humorous visuals and lighting. There is also a sense of real wonder in the show, along with a captivating feeling of witnessing the emotional truths of family life.

With a great cast led by Treadaway, and with excellent support by Niamh Cusack and Sean Gleason as Siobhan and Christopher’s father, this is an evening of continual revelation and theatrical pleasure — including scene-stealing moments with a rat puppet and a real pet dog. It doesn’t shirk the discomfort of being a child with special needs, but — as Christopher learns to believe in himself — it also quietly illustrates some of the excitement of living in your very own world. And ends on a note of heartfelt hope.

This article was first published in Aleks Sierz. Reposted with permission of the author. Read the original article here.