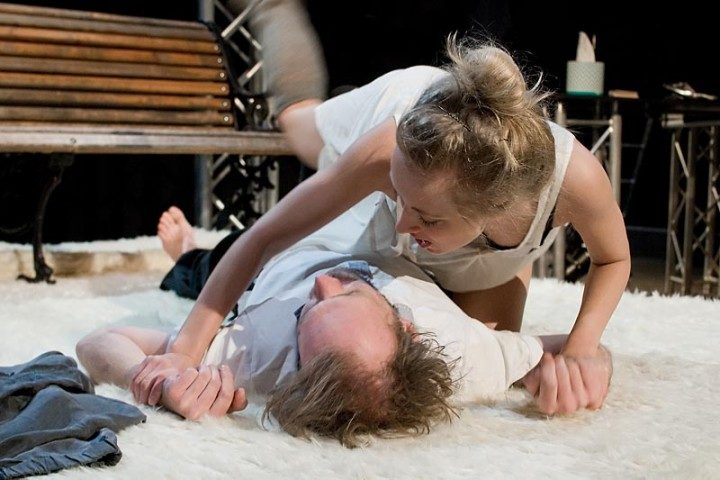 With almost one million theatre visits per year from a population of only 1.3 million, Estonia is The Land of Drama – draamamaa in Estonian. Born in the wave of a national awakening, and holding a position of a truth-teller when the country was occupied, today Estonian performing arts is more diverse and ready to discover the world than ever.

But how much do you know about Estonian contemporary performing arts?

The export portal of Estonian performing arts is draamamaa.ee. The site has information on Estonian productions ready for touring abroad and profiles on people connected to them, as well as annotations of contemporary Estonian plays that are translated and ready for productions abroad.

Action. “I’m sorry to bother you, but have you seen a house here lately?”

Drama. “Do you want me to come out naked and dripping into your cleaned-up room?”

Draama. “You know the name of my cow?”

These quotes are from the following Estonian plays: The Real Elvis! by Urmas Vadi, To See Pink Elephants by Piret Jaaks, The Highway Crossing by Jaan Tätte, and Am I Alive Now by Siim Nurklik.

Action (English), Drama (Greek), Draama (Estonian) – this is the essence of performing arts that transcends the boundaries of languages and aesthetic choices, the arm in fights for identity, the entertainer. 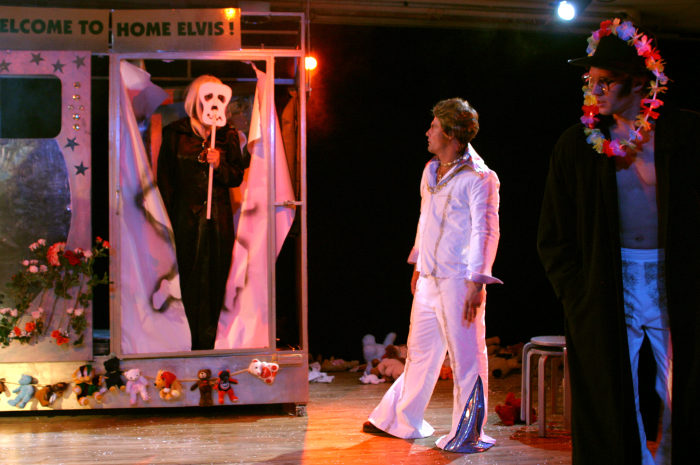 Did you know that the best way to experience Estonian theatre is to visit the showcase-festival Draama Festival (Eesti Teatri Festival Draama) held in the beginning of September each year?

Estonian Theatre Agency (Estonian Drama Agency before 2008) has held eleven drama competitions over the last twenty years. They are usually organized every other year but there have been two Children and Youth Drama Competitions and Competition for Monodramas. In these twenty years, there have been more than 780 full-length plays submitted to New Drama Competitions, more than 100 of them have been awarded or gotten honorable mentions, by the jury and at least 45 texts have been staged. Jaan Tätte, Urmas Vadi, Mihkel Ulman, Urmas Lennuk, Eva Koff, Jaan Undusk, Loone Ots, Martin Algus have all debuted as playwrights at these competitions. All the texts submitted to New Drama Competitions and much more can be ordered from Estonain Theatre Agency via www.teater.ee or www.draamamaa.ee. The next play competition will take place in 2015.

The Poetry of Everyday

Not everyone is capable of writing the everyday into art as it demands from the author the will to find reasons bigger than the individual life story behind the modest actions of characters portrayed. To succeed, the author either has to belong to the same community as his heroes or have the very firm eye of a bystander. The possibility to hurt someone is just as great as is the probability of hitting a nerve in the society. Characters in the plays of Urmas Lennuk often inhabit some small village (like the author himself does) where the train no longer comes (The Trains Do Not…) and where the school is on the verge of being shut down (At the End of the Day). For the author, this village is the last refuge for the vanishing world where those who remember old cartoons, void of violence, and miss the simpler life can escape (Bob Knows). Perhaps this is also the place where the journey of some of Jaan Tätte’s characters could end in (Mindless) or where the alcohol-driven arguments between brothers – like in Bonfire by Rünno Saaremäe – happen every day. What alcohol can do to a family is also a topic in Thirst by Martin Algus. He too has characters playing with the idea of moving to the country (Martin Algus. He too has characters playing with the idea of moving to the country (Postmodern Households), but they know far too well that they wouldn’t survive there more than a week without all that metallic shine and buzz of the coffee-shops you have in the city. Both Algus and Tätte are actors by profession, Lennuk has studied directing but is no stranger to the stage either – this shows that the experience of convincing the audience from night to night in the logic of the motives of the characters one’s portrays only helps one in becoming a better master of the poetry of everyday.

More and more directors prefer to write themselves and not use plays by someone else. Merle Karusoo has said that the reason she has collected material and written plays herself, is the lack of texts dealing with the questions she considers important. In recent years, however, she has found an ally in Andrus Kivirähk. The fact that many compositions of Mati Unt have now found their way back to the stage via interpretations of other directors, shows that the so-called director’s dramaturgy is a part of playwriting and can be used more than once. Productions of Tiit Ojasoo and Ene-Liis Semper in Theatre NO99 (Oil!, Hot Estonian Guys, How To Explain Pictures to a Dead Hare) have also asserted that. These texts are born in co-operation of directors, actors and dramaturg Eero Epner during the rehearsals and usually change through the performance period as well. Many other directors such as Uku Uusberg, Mart Aas, Andri Luup, Mart Kase, Priit Võigemast, Ivar Põllu, Hendrik Toompere jun, Andres Noormets, Paavo Piik and Mari-Liis Lill also write their own plays.

Still, the director’s dramaturgy is not synonymous with dramatizations, the latter meaning putting something originally in prose into the form of drama, although there are many directors in Estonia that prefer to dramatize themselves. Peeter Tammearu, Priit Pedajas and Elmo Nüganen are some examples. These dramatizations are often loyal to the original text and are therefore meant as one possible interpretation suitable only for one concrete director. Director’s dramaturgy, on the other hand, is not afraid of disjunction and textual gaps every new interpreter to fill because the dramaturgical structure of these texts has been tested and proven in rehearsals and during the performances. In Estonia, teaching dramaturgs have also played a significant role in the raising of such texts. The School of Drama of the Estonian Academy of Music and Theatre has taught dramaturgs since 2004 and Drakadeemia – a non-profit organization – since 2007. Both try to alter the perception of dramaturg as someone making the suggestions for the repertoire and editing the leaflets, introducing the other side of the work of a dramaturg – that is offering dramaturgical guidance to directors in rehearsals and to make sure a strong director’s dramaturgy is born.

Young authors are always looking for their place under the sun but what makes these journeys interesting, are the different starting-points each generation has. Young authors of today are usually cyber-skilled and used to the parallel identities offered by the virtual reality. So the only question is, whether to play along or distance yourself from the virtual world. In the end, it doesn’t even matter if you start your acquaintance with this generation from the texts by Mart Kase where the logic of computer-world is transferred to real life (LIFE 2.0) or from the inner-demons of Jim Ashilevi (Porcelain Smoke). Siim Nurklik’s Am I Alive Now, second prize winner in 2009 New Drama Competition depicts the world where people communicate with catch-phrases and newspaper titles, keeping the boredom away by playing games that have the potential of becoming the next reality show on TV. Nurklik shows quite emphatically that rebellion against this routine is futile. The narrative of go neo und romantix by young playwright Kadri Noormets revolves around different me’s that are painted on the body and that reach out as a spiral to talk, tell and have a dialogue with delicate attention to language.

We will no doubt see more possibilities of addressing the question of identity through different authors in the near future, but one thing that seems to be common to all of them, is a certain neglectfulness of the rules of drama as a genre: a play is no more a fine-tuned product you cannot change or shorten, as it is not for the author to worry how his text could be staged. The latter is up for the directors, and hopefully, the need to adapt to these new type of texts will force directors to create new ways of expression. The 21st century does not know undirectable texts.

The 23rd Cairo International Festival for Contemporary and Experimental Theatre