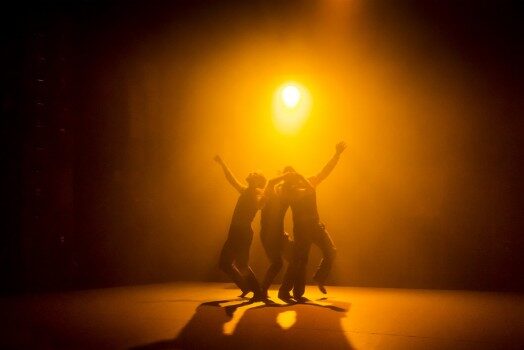 Have you ever wondered who is doing devised work near you? Or, wanted a one-stop-shop in finding the varying companies across the globe who are working on devised theatre? Well, look no further! This is a list of companies doing devised work organized by country or continent (with links to the website when they exist) and info from their website about their work (unless otherwise listed). This list is ongoing and if you have any suggestions for additions, please send them to Martine Green-Rogers at the address listed in the bio below!

B-Floor (Bangkok, Thailand) is Thailand’s vanguard physical theatre company. For over 10 years, B-Floor has been at the forefront of creating highly visual theatre combining movement and multimedia elements, and stimulating social and political awareness. B-Floor has not only enjoyed success in Thailand but has also impressed international audiences in the United States, France, Denmark, Egypt, India, Korea, Singapore, Taiwan and Japan.

David Glass Ensemble (London, England) produces and tours vibrant International Theatre. Having worked in over 70 countries worldwide, David and the Ensemble are bringing new and revived work to a new generation. The Ensemble collaborates with the best of performers, designers, writers and composers mixing established talent with the new and upcoming and creates inspiring extraordinary theatre for a world stage. Established in 1990.

Gecko (Ipswich, Suffolk, England) is an award-winning and internationally-acclaimed physical theatre company, led by Artistic Director Amit Lahav. A Gecko show is visual, visceral, ambitious theatre crafted to inspire, move and entertain. Gecko strives to make their work wide open to interpretation and put their audience at the heart of the narrative. Amit has created an organic devising process that oscillates between intense periods of experimentation, making brave leaps, learning and failing and including choreography, writing, storyboarding and reflection. Every stage includes sonic and technical development alongside the choreography.

Improbable  (London, England) was founded by Julian Crouch, Phelim McDermott, Lee Simpson and Nick Sweeting in 1996 and is currently lead by Artistic Directors Phelim McDermott and Lee Simpson. Improbable occupies a vital space in the landscape of UK theatre. At the heart of [their] artistic practice is improvisation. Whether in performance, rehearsal or development [they] will use the practice and philosophy of improvisation in the process of creation (even when [they’re] working on classic plays or operas). [They] see improvisation in all its forms as a tool for social change. It is a deeply democratic art form that fosters a sense of community and empowerment amongst its participants and audiences alike and, in an age of increasing digital complexity, is determinedly live.

Told by an Idiot (London, England) creates theatre for national and international touring and for specific spaces. [They] set out to explore the human condition by celebrating and revelling in a style of theatre that is bigger than life. The company always seeks to acknowledge the artifice of theatre and makes no attempt to put reality on stage. [They] remain, however, fascinated by the fine line between comedy and tragedy that exists in the real world. Through collaborative writing, anarchic physicality and a playful but rigorous approach to text, the company is committed to creating a genuinely spontaneous experience for the audience. Using a wealth of imagery and a rich theatrical language, [they] aim to tell universal stories that are accessible to all.

People Show (London, England) formed in 1966, People Show has been creating devised performances in theatres, in telephone boxes, on streets, even on water, for five decades, and its radically disruptive influence has made a major contribution to the current theatre landscape. People Show are committed to making multi-disciplinary, multi-media live theatre that is directly informed by the personalities and skills of the individuals working within the company at any given time. [Their] non-autocratic ethos is still as relevant today as it was at the inception of the company in 1966, and [they] strive to maintain a balance of creative input between the longer-standing members of the company and new artists. This is a crucial part of the process of generating and exploiting new material created through inter-disciplinary collisions and tensions. [They] have a commitment to creating theatre in its widest sense, embracing emergent technologies whilst remaining sensitive to the human scale.

Sojourn Theatre (NY, NY),  founded in 1999, is an award-winning ensemble theatre company comprised of 15 artists who live in 8 cities and make performance together around the nation. The company is led by founding artistic director Michael Rohd who devises, directs and collaborates on cross-sector projects around the nation, is on faculty at Northwestern University, wrote the widely translated book Theatre for Community, Conflict, and Dialogue, and leads the Center for Performance and Civic Practice.

Who’s Louis (Salt Lake City, UT) mission is to represent humanity and its many facets by revitalizing new art through the lens of young artists. [They] seek to create dynamic, engaging, and inclusive theatre through alternative writing techniques.

Tectonic Theatre Project (NY, NY) is an award-winning company whose plays have been performed around the world.  The company is dedicated to developing innovative works that explore theatrical language and form, fostering an artistic dialogue with audiences on the social, political, and human issues that affect us all.  In service to this goal, Tectonic supports readings, workshops, and full theatrical productions, as well as training for students around the country in our play-making techniques. Tectonic Theater Project was founded in 1991 by Moisés Kaufman and Jeffrey LaHoste. Tectonic refers to the art and science of structure and was chosen to emphasize the company’s interest in construction — how things are made, and how they might be made differently.

The Civilians (NY, NY) is a company that creates new theater from creative investigations into the most vital questions of the present.Through a number of artistic programs, The Civilians advances theater as an engine of artistic innovation and strengthens the connections between theater and society. An artist-led company, The Civilians creates and produces new theater and pursues [their] artistic mission through programs serving artists and the public. The company’s work is grounded in investigative theater, an artistic practice rooted in the process of creative inquiry. Investigative theater brings artists into dynamic engagement with the subject of their work; the artists look outward in pursuit of pressing questions, often engaging with individuals and communities in order to listen, make discoveries, and challenge habitual ways of knowing. The ethos of investigative theater extends into production, inviting audiences to be active participants in the inquiry before, during, and after the performance. Believing that a culture of ongoing innovation and vitality is fed by having artists be a central part of our organization, [they] sustain a multi-disciplinary community of Associate Artists as a core component of the company.

Rude Mechanicals (Laurel, MD) Wildly inventive and original, they re-infuse classical works with edge, intellect and a message that resonates brilliantly with the modern age.That message comes from a deep and profound love of classic works, and a belief that reexamining and questioning the assumptions keeps art and theater alive. The Rude Mechanicals are rebels. They reject the mold because they have the freedom to make more interesting, less commercial choices.

The Team (NY, NY) is a Brooklyn-based ensemble dedicated to creating new work about the experience of living in America today. The company was founded in 2004 by a group of 6 NYU alumni, and has since grown to 15 core members and a continually expanding group of collaborators. [They] devise plays by examining a wealth of material, ranging from existing texts (fiction, theory, drama, etc.) to images taken from visual art and film, and then combining that research with original writing and staging. In a final production it is nearly impossible to trace any one line of dialogue or image back to a single author’s hand.

Waterwell (NY, NY) strives to create new theater that entertains and enlightens. The company seeks to prove itself a vital presence in the lives of its audience by remaining always responsive: responsive to the events affecting the world at large, responsive to changing modes of expression and responsive to the individuals attending the performance. Waterwell endeavors to cultivate the inherent danger in live performance to create an exciting and unpredictable event — an event pruned down to its irreducible elements: human beings sharing a space and a story. Through that story…through the humor, sadness and hope it evokes…Waterwell hopes to empower its audience to change their lives and the world in which they live.

The Ghost Road Company (Los Angeles, CA)  The ensemble scavenges the current social landscape for objects, language and images that are, in turn, informed by the ensemble’s individual experiences of the world, creating something surprising and unexpected. The world of the piece is the piece itself, in which the “everyday” transforms into unexpected realizations and epiphanies about the nature of truth and possibility in the world at large.

Neo-Futurists (Chicago, IL) Although originally created as an ensemble to perform a specific show, The Neo-Futurists have grown to become one of the most highly regarded experimental theater companies in America. From humble beginnings as the first late-night theater production in Chicago, [they] have expanded into a company that mounts full seasons of adventurous, smart, interactive theater while still pursuing the ideas that inspired [their] creation.

Tricklock (Albuquerque, New Mexico) Founded in 1993, Tricklock Company, is a theatre ensemble whose mission is to create, tour, produce theatrical work, and to foster international exchange and artistic development. [They are] an ensemble of theatre creators dedicated to the investigation of the human condition through group-generated, original theatrical experiments. The ensemble has a deep passion for training and creating together, teaching and mentoring, and international artistic exchange through touring and Tricklock’s annual Revolutions International Theatre Festival.

North American Culture Laboratory (Highland Lake, NY) is a professional, non-profit company that has created more than 20 original ensemble theatre productions and countless public spectacles since 1997. Founded by Canadian-born Tannis Kowalchuk and American Brad Krumholz, NACL operates a theatre space and retreat center in Highland Lake, NY, located two hours from New York City in the southwestern Catskill region. The company creates and tours its own devised theatre performances, collaborates with an international circle of artists, and presents a performance season that features work by local and visiting artists.