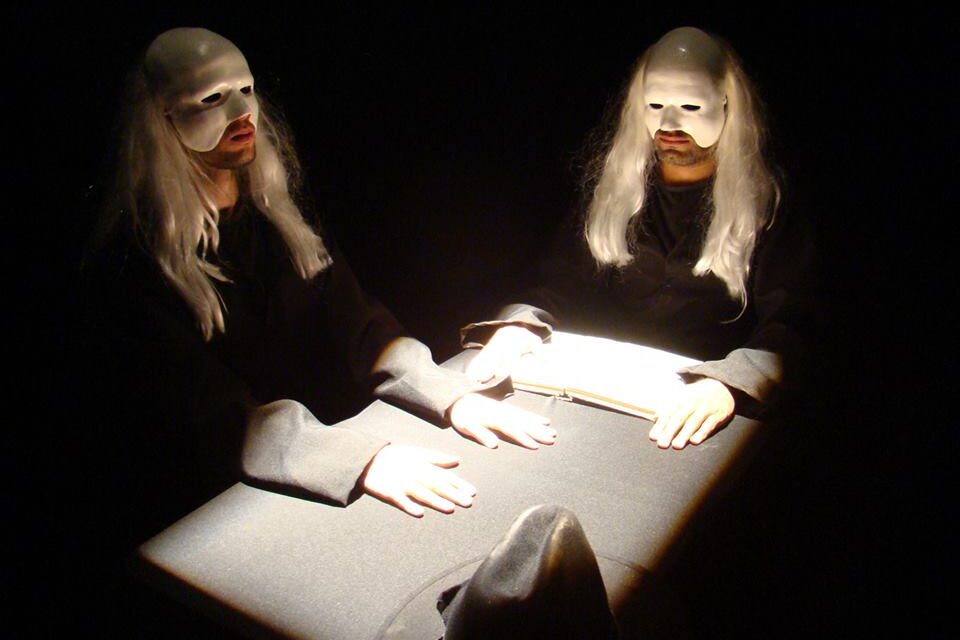 Máskara – the Transdisciplinary Research Center in Theatre, Dance, and Performance – is an artistic and academic collective founded in 2002 in Goiânia, Goiás, Brazil. It is linked to the School of Music and Performing Arts at the Federal University of the State of Goiás. The academic research conducted by its members is diverse and takes into account individual interests and different ways of looking at and understanding the world. It shares interests in research relating to the artistic and cultural performances of Goiás, Brazil, and the world. In Máskara’s stage works, it seeks to explore the body in an organic way – that is, understanding that movement, breathing, voice, subjectivities, thoughts, and sensations act together and interact constantly in the actors’ construction of their psychophysical and vocal actions in the nucleus of performance.

The collective has produced artistic performances by Latin American authors such as the Brazilian dramatist Nelson Rodrigues (1912-1980), the poet from Goiás, Bernardo Élis (1915-1997), and the exiled Cuban poet José Triana (1931-2018). However, it was in its successive approximations, attempts, and experimentations with the performances of various works by the Irishman Samuel Beckett (1906-1989) that Máskara strengthened itself as a research group in the city of Goiânia. They delivered a Beckett painted with its own colors, the different colors from the cerrado (savannah) in Goiás, other corners of the country, as well as other countries. The first Beckett production by the research group was Waiting for Godot (Esperando Godot, 2005), followed by Company (Compania, 2009) and What Where (Quê Onde, 2010). The last production was invited to the Beckett Festival in Buenos Aires, Argentina, where its premiere also took place. In 2014 the group returned to Beckett in a compilation of short plays entitled Short Beckett (Curta Beckett), and in 2016 it developed a stage adaptation of the radio play Cascando, which was entitled CascandoBeckett: An Image Like Any Other (CascandoBeckett: Uma Imagem como outra Qualquer).

Máskara’s relationship with The Between.Pomiędzy Festival of Literature and Theatre (in Gdańsk/Sopot, Poland) also began with work based on Samuel Beckett’s plays. In 2010, Robson Corrêa de Camargo, the director of the research centre, was invited to conduct a short theatre workshop at what was then called the Back to the Beckett Text Festival. In 2011 he directed a Beckettian piece with Polish and Lithuanian actors in the city of Sopot. On this occasion, an adaptation of Endgame (Fim de Jogo) was performed as part of the project called Gra Becketta (Playing Beckett). After these early meetings, the collective attended the 2018 festival where the director, along with actors Ronei Vieira, Allan Lourenço, Mariana Tagliari, and Ilmara Damasceno, collaborated with local actors from the Teatr Gdynia Główna company. Together Polish and Brazilian actors performed Company (Company). Camargo, Tagliari and Lourenço also participated in academic seminars at the University of Gdańsk Samuel Beckett Seminar and presented their reflections on the performances of Máskara in Brazil. In May 2021, held remotely because of the Covid-19 pandemic, the Máskara research centre was again present at the Between.Pomiędzy Festival, and participated in two activities. The first was the conference the Island of Youth, where three Máskara researchers presented papers. Ronei Vieira reflected on the transcreation of the dramatic text La Noche de los Asesinos (The Night of the Assassins), by Cuban playwright José Triana, for a stage performance by Máskara. Eduardo Teixeira discussed the possibilities of aesthetic relationships between the Polish director Zbigniew Marian Ziembiński and Russian director Vsevolod Meyerhold, and Luís Guilherme Barbosa analyzed concepts of sensitive architectural space and theatrical scenic space.

The other activity in which Máskara was present was The Beckett Seminar in Gdańsk in 2021, where the 40th anniversary of the premiere of Samuel Beckett’s Ohio Impromptu was discussed. Robson Corrêa de Camargo (Brazil), Stanley Gontarski (USA), Nicholas Johnson (Ireland), Paul S. Shields (USA), Octavian Saiu (Romania), and Tomasz Wiśniewski (Poland) participated in the round table discussion. Originally written for the symposium “Samuel Beckett: Humanist Perspectives”, held at Ohio University in 1981, at the request of Beckett scholar Stanley Gontarski, Ohio Impromptu is one of Beckett’s disturbing short pieces. The author proposed to write an improvisation, a genre of play that has the actor as the center of the show in which they stage a possible satirical improvisation to defend the actor’s craft. However, Beckett’s piece differs from the classic format of the genre in its staging of an act of reading, writing, and rehearsal, not an improvisation by actors. Two characters, “as alike as possible”, focus on a story read in a large book open to its last pages. Brazilian professor and researcher Célia Berretini argues that the similarity between the characters suggests that they are two halves of a self, although with different identities: the Reader and the Listener.

The actions in the play, slow and sometimes giving the feeling of immobility, are sparse and repetitive. The Reader reads while the Listener listens. The latter slaps his hand on the table so as to interrupt the action of the former, shows discomfort, and, thus, demands the repetition of a certain passage or authorizes the reading sequence. The narrated actions are, as in several other plays by Beckett (Rockaby, Krapp’s Last Tape, Play, and Not I among others), an invitation to allow the viewer’s imagination to create multiple interpretations. The repetition, micro-movements, and subtlety of the actors’ actions demand that the audience becomes what the Russian director Vsevolod Meyerhold (1874-1940) defined as the fourth creator. In the case of Samuel Beckett’s work, and more specifically in Ohio Impromptu, the text provokes the creation of images that sometimes move away from the image presented on stage and sometimes reinforce it. Thus, it instigates a plurality of readings including identification and estrangement, and private journeys of the reader/viewer. Together with the author, the actors and the director compose the meanings of the play or their absence. “Little is left to tell” is the first sentence uttered by the Reader after opening the book’s final pages. The phrase suggests that the spectator has arrived to witness something that has been happening for some time, and the situation is similar to reading a book from the middle to the end or arriving late to the cinema or theatre. Thus, guided by the image of those figures with white hair and black robes, or by the images drawn in the form of words in space, the viewer seeks to create their own plot, making it possible to look into a third mirror or sit at the table next to the Reader and the Listener. What would the viewer’s reflection be, the Reader or the Listener? Or, if they are reflections of each other, what is the third reflected image? Who will the duplicated figure be? In this process of recognition by the spectator, it is possible that a fusion might occur. To paraphrase Ohio Impromptu, without ever exchanging a word, they would become one. All of them, Reader, Listener, and Viewer.

Although Beckett offers a text full of images that are described in the Reader’s action and, in turn, bring to the stage two almost immobile figures, it is important to emphasize that the strength of Ohio Impromptu lies precisely in this opposition. The image moves slowly, the text is read equally slowly, but the spoken images are many. Máskara’s approach to this short text is based on the investigation of those bodies that will be inhabited, provoked and dilated in time.

Re-signifying some of the stage images and directions proposed by Samuel Beckett, Improviso de Ohio, directed by Robson Corrêa de Camargo, provides actors with a space for dialogue between their subjectivities and the words of the text, and between the actions proposed by the playwright and the creation of new actions from the discoveries of subtexts. Haroldo Di Piedro performs an exercise of approximation and detachment in his speech, meaning that he brings the text closer to himself as if it was a personal memory, made present at the moment the memory is externalized. In other passages the memory moves the plot away from itself and is verbalized by someone who narrates someone else’s story or uses the text to enliven or provoke a third party. This game is also present in the performer’s gestures and in the minimalist relationship he builds with the Listener, who is his double. Therefore, the Reader is in a relationship he builds with himself-as-the-other. Ronei Vieira and Haroldo Di Piedro’s gestures are subtle, delicate, and slow, but each one is a break with the immobility proposed by Beckett himself. The knocks on the table with an open hand, like the sounds produced by hands and feet in the Brazilian popular music catira, create a drama of their own. They highlight the sensations and feelings of this Listener who, like the Reader in this production, does not hide his face with his hands during almost the whole performance. The characters exchange looks, recognize, and find each other strange; they judge and welcome. Nuance can be perceived through speech and how the small movements inserted are performed: smoothing the table cover, turning the page of the book, looking at the hat, moving nails, preventing the page from turning, etc. Máskara, then, highlights and expands on the unsaid and the repetitions that are the common thread of Ohio Impromptu.

Máskara makes use of long white wigs as proposed by Beckett in the original text, and white masks, designed and made by Haroldo Di Piedro, to create the image of the double or the double of the image. The idea of masks arose at first because this scene has two actors who are very different in appearance. In Improviso de Ohio, the group uses the mask to stress strangeness and at the same time as an element that enhances the illusion of the two figures either being the same person or a reflection, a double. In this way, it reinforces the invitation to viewers to use their imagination and feel masked, too. There is no exploration of excessive or broad gestures, nor freezing of the expressive possibilities of the face. The actors’ maintained the subtlety of the movements and found facial expressions that distanced themselves from the idea of the comic easily linked to the use of masks.

So to participate in the Between.Pomiędzy Festival, the group was inspired to create an audiovisual reading of their version of Ohio Impromptu produced for the stage in 2014. Whereas according to the German-Jewish sociologist and philosopher Walter Benjamin, the cinema actor does not speak directly to the audience and thus loses the possibility of shaping his/her performance based on a sensory dialogue with the audience, Máskara invited Erik Ely – a young filmmaker from Goiás – to participate in the audiovisual creation process. From the action of the actors, now performed in a frame in front of a mirror, inspired by a photo by the Polish artist/playwright/novelist Stanisław Ignacy Witkiewicz, (“Multiple self-portraits in mirrors”, 1915-1917), the filmmaker used the system as a curious spectator, who paid attention to every little movement. Thus, due to the contemporary possibilities of dialogue between theater and the audiovisual medium, the participation of Máskara in Between.Pomiędzy became possible, even in a moment of social distancing.

This post was written by Ronei Vieira Nogueira and Robson Corrêa de Camargo.