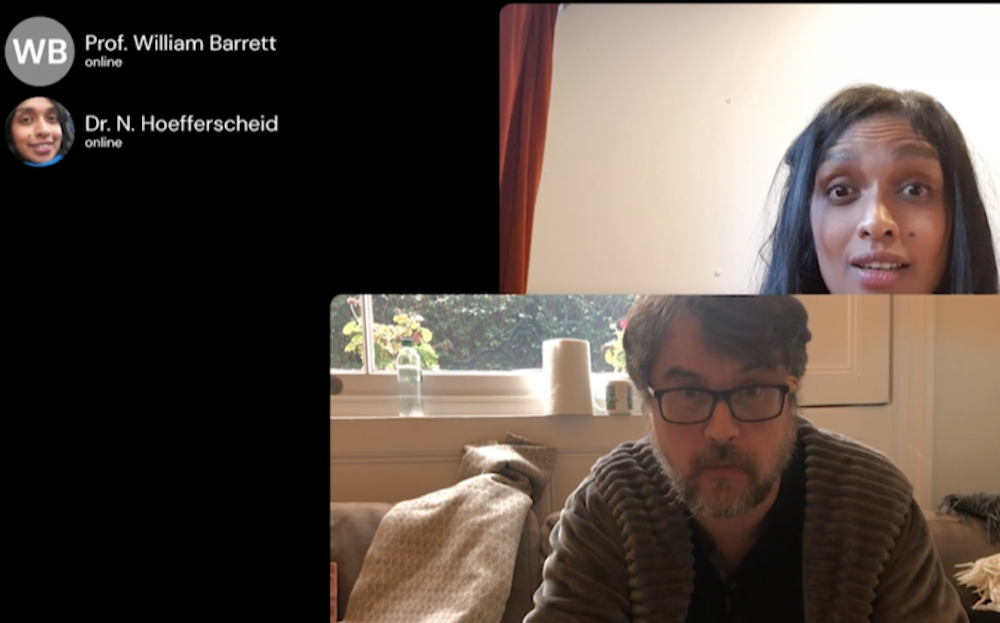 Graeme Stirling and Uma Nada-Rajah in "Bubble" in 2020.

It’s only been a week since London’s West End went dark and theatres closed all over the UK, but it feels like months. Really. Like many others, I’m in self-isolation, stressed by working online and worried about getting enough food and essentials, so it is heartening to know that digital performance (can you even call it theatre?) is alive, and, if not exactly live, certainly kicking. Theatre Uncut, a company whose slogan is “Political Theatre for Everyone Everywhere,” have this evening Facebook-streamed a recording of playwright Kieran Hurley’s short drama Bubble. For the coming months, this kind of thing will be our experience of theatre, old and new.

Set in the digital world, on a social media platform such as Facebook, the film tells the story of how a group of university students and their teachers react to a stupid, but very small, incident. Professor William Barrett, a senior lecturer in history, arrives to give a lesson on his pet topic, the civil rights movement but finds that his students are too busy talking to listen. When he unsuccessfully asks them to settle down, he says that he can’t be heard “over a bunch of giggling sluts!” Hurley’s ironic touch is that Barrett’s inability to be heard is a prelude to a story about other social groups and individuals being listened to. Or not.

Thanks to social media, and fueled by a mixture of traditional second-wave feminism and the newer woke sensibilities, this reprehensible incident rapidly spirals completely out of control. Connor, a sporty student, posts about it, and a variety of other students take up the case, which soon becomes dubbed “Slutgate.” Hannah, a feminist activist, and Jane, a postgrad, lead the charge, demanding action against this sexist prof. Other students, such as the naïve Ruth and Courtney, a student journalist, add their views and the latter manages to advance her career by reporting on the situation. Meanwhile, Anna, who was one of the original victims of the prof’s insult, really doesn’t give a shit.

Things escalate further when Preston, a loner with Alt-Right sympathies, gets interested and invites one Randy P, a vocal fascist, to speak at the university. Issues now arrive with the speed of superfast broadband: victim-blaming, safe spaces for women only, free speech arguments, witch-hunts, no platforming and woke students who are, to use the image evoked by the play’s title, not only bubble-wrapped snowflakes but who also live in an isolated bubble. While tempers get frayed on the internet, actual violence occurs as demonstrations and counter-demonstrations are staged. At one point, Naomi, a sociology lecturer, sets out the arguments for free speech in an age of heightened sensitivities.

The case for and against the right to speak freely is well known. Liberals are always upset when they have to confront the challenge of extending the rights they claim for themselves to other groups whose ideas and practices they detest, and oppose. So the classic question of giving a platform for fascistic views is clearly aired. And Hurley shows how uncomfortable some pro-feminist men become when women insist on excluding them and then follows this up by showing how ideological feminism can turn into bigotry. Although the latest debate, about the rights of trans people, is not included in this piece, almost everything else is.

The problem with the play is that it is more of a journalistic and educational piece than a work of imaginative vision. Hurley deliberately creates a world that is a mixture of the United States and the United Kingdom, but its lack of specificity gives it a superficial feel. While the arguments articulated in Bubble are taut summaries of numerous debates and conflicts, the film lacks drama. There is a banal familiarity about these university and social media situations which means that the initial excitement of the play’s digital form soon evaporates. So while there are many good debating points here, there is little that is new. One of Theatre Uncut’s brilliant characteristics is that it offers texts to other theatre groups for staging, although under present circumstances this is extremely difficult.

This production, directed by Emma Callander and Hannah Price, uses video posts, with visual effects which include shared screens, emojis, buffering, distortion and fadeouts. Louis Hudson’s visual styling is attractive enough and Simon Ruston’s music is zappy and bouncy, and this film version works better than most staged plays about the digital world. A strong international cast — who never met in person, but rehearsed by Skype and filmed on their mobile phones and laptops — includes Emmanuel Sonuga (Connor), Emilie Robson (Hannah), Emma Semain (Anna), Malou Keiding (Jane), Naomi (Uma Nada-Rajah), Ed Larkin (Preston) and Graeme Stirling (Barrett), all of whom are convincing. Bubble is a short film, running at 50 minutes, and although it is wonderfully clear, it is also disappointingly slender.

This article was originally posted at www.sierz.co.uk on March 23rd, 2020, and has been reposted with permission. To read the original article, click here.