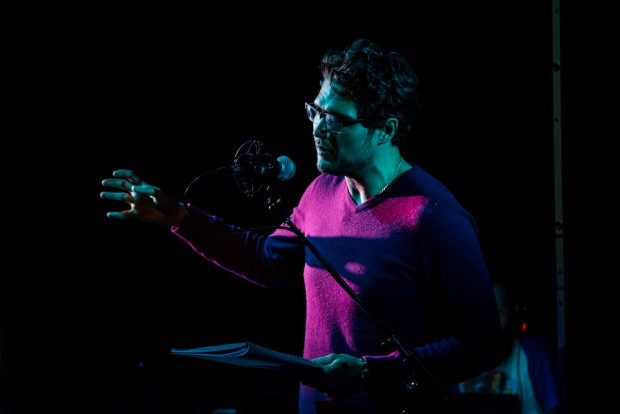 Javaad Alipoor in "The Believers Are But Brothers" Photo Credit: The Other Richard

Do boys never leave the playground? Just when I was reasonably sure that the crisis of masculinity was an old-fashioned trope—I mean, so very 1990s—along comes a one-man show that investigates how lonely young men, seething with resentment, surf the internet, attracted like flies to shit by tech-savvy extremist groups of both secular and religious persuasions. And boy are they persuasive! Javaad Alipoor explores this dark world in The Believers Are But Brothers, his Edinburgh Fringe hit from last year, which now visits the Bush Theatre in west London.

Because it’s about the internet, the audience is encouraged to join a WhatsApp group and to leave their phones turned on. Having written the 60-minute piece, Alipoor also performs it. Seated at a desk with a screen on a stage bathed in symbolic darkness, he begins by talking about how he communicates with many people he’s never met via WhatsApp and Facebook, discussing politics and especially the stereotypes of Muslims and Asians that, he reckons, still dominate the mainstream media. He shares some memes. His show, he says, is “about men, the internet, and politics.”

The story, such as it is, begins with the image of a cell. This one is in Egypt in 1957, and it held the radical Islamist fanatic Seyyed Qutb, “the intellectual father of modern jihadism.” He had a vision of the triumph of militant Islam, “a vision of truth, and love, freedom, and utopia that can only be reached by climbing a mountain of corpses.” After 9/11, one thing is for sure: the corpses certainly do pile up, and quite quickly. But as well as the background of Iraq and Syria, this is also a story of three ordinary people. Two are British Muslims, Atif and Marwan, attracted to helping their co-religionists in Syria, and one is an American middle-class kid called Ethan. He inhabits chat rooms like 4chan, with expressions like KEK, threads like Random and horrible images of racism and violence. Having abandoned the grey zone of liberalism, all three have drifted to the edges: religious and secular extremism.

What unites these three boys are their frustrations and resentments: they are losers who are angry with the world. They feel misunderstood and badly treated; they are ignored; they are laughed at; they don’t have girlfriends. Instead, they look for and find, a cause. Unlike the Angry Young Men who were rebels without a cause, they are raging kids who have the whole internet to search. And what they find there fascinates them: beheading videos; rape videos; extreme videos. They leave the middle ground; they scorn liberal ideas; they embrace violent fantasies and violent ideologies. Their heroes are Abu Musab Al Zarqawi and Donald Trump. And, sometimes, they can really cause some damage.

So just as the playground can be a dangerous place, full of cruelty, humiliation, and betrayal, so too the internet is one giant playground where the powerless can kid themselves that they have power. Power at their fingertips. If Islamist fantasies, Trumpism and Brexit are the delusions of the loser class, society’s surplus DNA, then the past few years have seen them on the march. And the stamping feet are getting louder. Alipoor, who chats to us with a beguiling mix of sincerity and pointed intelligence, outlines all this is in a dark and resonant prose that is both gothic and poetic. He offers no surprises and no solutions—he just states the problem: young men and their internet fantasies.

If this is a revelation, then you will love this show. If you want to participate in live WhatsApp communications, ditto. If the blue lights of the computer screen is your idea of aesthetic beauty, ditto. But although Alipoor is a very personable performer and has a charm that wows the audience—one WhatsApp contribution exclaims “how fit Javaad is”—that can’t disguise the fact that The Believers Are But Brothers is quite a slim and gimmicky event. The screens glow, the projections almost approach the illegal (yes, censorship, as well as good taste, has a role to play when dealing with Islamism and sexual violence) and the music swells, but although the show is quite an exciting hour in the theatre, it really doesn’t amount to much. At their worst, the WhatsApp messages are a distinct distraction from the live action.

Alipoor co-directs, along with Kirsty Housley, and theatre-maker Chris Thorpe has likewise contributed his dramaturgical skills. Luke Emery, the piece’s producer, is also on stage, operating some of the digital tech. Despite several moments when Alipoor reminds us of the disturbing world of violent fantasy that lurks out there, a mere click away, the absence of a compelling story and the brevity of the proceedings tend to negate some of the insights. In the text, there are plenty of metaphors and rhetorical flourishes, but simply not enough drama. At the end, in terms of theatre, the playground suddenly seems empty.

The Believers Are But Brothers was at the Bush Theatre.

This article originally appeared in Aleks Sierz on January 26, 2018, and has been reposted with permission.