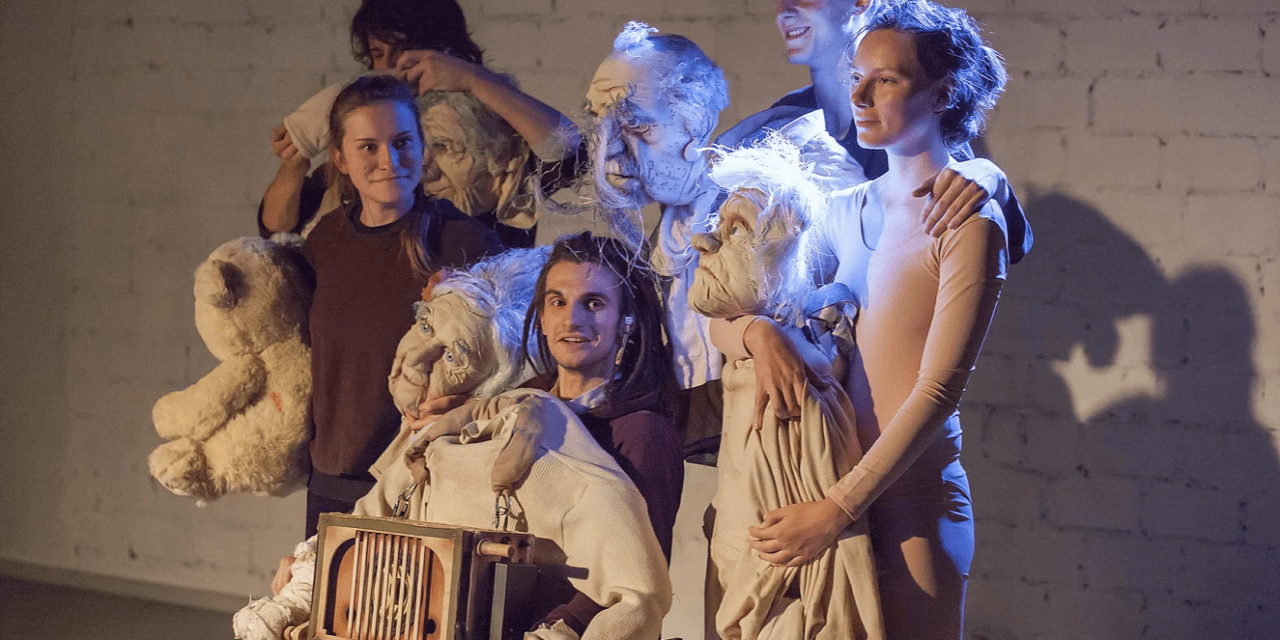 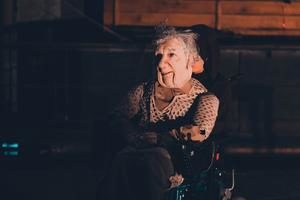 Vocal recordings play on loop to mimic the tendency of geriatric patients to repeat their stories. Photo Credit: Maryana Klochko

Two years before creating Autumn on Pluto, Sashko Brama visited a geriatric home while helping his volunteer friends. This visit ignited a concept of a performative project based on interviews with the inhabitants of a care home. The first part of the project provided that actors should frequently visit the geriatric home. Later psychologist Alyona Barbul held art therapy sessions for the inhabitants of this facility. Eventually, the art therapy transformed into a separate project Spring on Pluto where, as the prospect goes, “inhabitants of care home have a chance to draw, sculpt and meditate that creates a positive atmosphere and satisfies the need for creativity and mutual aid.”

In Ukraine, this project is the first of its kind, but in Europe, it is a well-known practice. For example, an Austrian group “Wochenklausur” from Vienna created a project in 1993 that investigated problems of homeless people. Having researched the issue, the group decided to use all their funding not to create a performance as it had been planned, but to buy an ambulance van instead. Also, performers convinced local authorities to allocate money for medicines and doctors who would patrol the city and provide help to the homeless. Modern performative practices theoretician Anna Vuyanavych believes that this is the newest kind of performative art: “when art and performativity stop representing social environment and become social environment themselves.”

It is a common European practice for artists to create interactive or performative projects to investigate and aid certain social groups, Photo Credit: Maryana Klochko

Due to similar reasons, Spring on Pluto (including visits to geriatric home which was actually material collection) may be put in one line with projects where the social constituent is viewed as an act of art. However, Sashko Brama does not agree.

It all started as an idea for a documentary theatrical performance (six stories of the geriatric home inhabitants were selected for the show). For Sashko it became the next step in his creative path after staging Diploma and R+J. The inescapable problem of the documentary aesthetics is text authenticity and the issue of broadcasting it from the stage. That is why, holding distrust against patterns and intonation of the traditional drama theatre, author-director makes a rather unexpected choice to work with human-like dolls. According to this idea, actor-performer walks the doll character out onto the stage and recorded text is delivered through speakers. These texts seem to be caught in a loop and play for several times. Sashko Brama admits that elderly people from geriatric home had a similar way of thinking – they kept telling same stories over and over again as if they had been caught in a time trap.

For the director, it was extremely important to underline the distance between the text and the performer. As a result, we can differentiate three elements of action: Actor, Mask, and Recording. This resembles an Eastern philosophic concept of personal self-identification: Me – the Soul, Me – the Body and Me – the Desire (thin body). Visually and symbolically this idea is supported in a scene where the performer (Viktoriya Kotelenets) frees herself from her “body” (doll) evoking association of soul departing from the body.

During production period the project was presented to the audience several times, which was useful for preliminary approval, development and finding answers to complex questions. It is important to emphasize that part of the project funding was raised through “Spilnokosht” crowd-funding platform and grants. On the final stage of production German director, Andre Erlen joined the project (due to the participation of Goethe-Institut). The guest director did not aim to change anything in the show but rather expressed his opinion, that resulted in a much more careful selection of elements – some scenes and episodes from pre-premiere shows were eliminated.

The show consists of two parts: documentary dramatic and performative. In the first part, performance is disguised because the acting person is hiding in the shadow behind the doll. Instead, the drama and authenticity of each story from care home are in the spotlight. The second part comprises reflections of actors-performers who free themselves from masks and stay on the stage “as they are.” They act according to the laws of physical theatre: conveying narration merely with the help of body language, sometimes using voice – a record, just like in the first part.
Autumn on Pluto addresses everyone and offers a range of vital issues for discussion: suffering, aging, priceless happiness of every minute of life, compassion and care for the lonely ones… Perhaps, someone will remember a so-called “Theatre of Death” that appeared in different contexts in the works of directors Antonen Arto and Tadeusz Kantor.

Brama’s use of dolls onstage helps to represent the idea of “a person who has not died but is not living either” Photo Credit: Maryana Klochko

Speaking of this performance and specifics of its perception we can define three conceptual levels. The first one is social. A majority of theatre-goers (both professional and amateur) are impressed by this surface level. It outlines the borders of geriatric home, separating us from those who abide their end on the sidelines of our “normal life.” But the social constituent turns out to be only the first step to exploring a much deeper topic, as defined by the authors: “a view on life and its values through a person who surrendered to their age and time and was taken prisoner to their own memories and pain; a person who has not died but is not living either.” Should the performance’s emphases been placed more accurately, and social issues did not override other topics by inducing a great emotional response, other conceptual levels would look more significant. Eventually, the media also made it harder to realize performance’s true goals by covering Autumn on Pluto as a purely social project. That is why a large part of the audience was set to see the fate of a certain social group and not mankind in general. Sometimes our expectations become a trap for our perception from which we fail to observe reality.

The second level reflects performers’ feelings and impressions from the visit to the geriatric home, as well as their personalities and life stories. All these elements come together to make up the second act of the performance.  Sashko Brama adds to this a metempsychosis lining that accelerates the sense of frustration: we, the immortal souls traveling through numerous worlds of material being, are doomed to suffer. In other words, we all are in the exclusion zone – on Pluto. This part appeared less exciting to the audience, but in my opinion, it is way broader and more interesting from the artistic point of view. 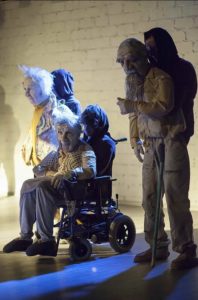 And finally the third level, the one that was left almost unnoticed: the final parable about an Astronaut who played music for the people and was happy. This episode is emotionally light, so having gone through the negative experience of those who had been on stage either in person or indirectly, we have a chance to let the emotional burden go and free ourselves. Unfortunately, due to certain subjective reasons, this part appears to be the weakest. Maybe the problem is that negative experience gets carved deeper into our memory, or maybe not everyone likes to be told that there is happiness out there, totally reachable and possible. However, there is no explanation from the director about how to find it – one of the performers makes the Astronaut stop talking and carries him to the back of the stage like some inanimate thing. To my mind, this episode reveals the core essence of whole performance, but without decoding it audience loses logic chain – the image of the Astronaut is closely related to the image of Pluto from the title.

Sashko Brama’s project is unique for Ukrainian theatrical practice in the way it is produced, in its form and meaning. In spite of certain director’s shortcomings in setting up the stage business architectonics and orchestrating particular elements, Sashko’s projects are never left out of the spotlight. The opinions about his earlier works divided because of provocative themes and materials, but Autumn on Pluto became a turning point in this respect – the performance is clearly well received and praised, first of all, due to the important social background. It is quite early to make any predictions about the development of this genre, as it only begins to root in Ukraine. Taking into consideration the sources of funding for the two Sashko Brama’s latest projects (Autumn on Pluto and R+J), the international cultural institutions are the ones most interested in this kind of art products.

This article was first published on Ukrainian Theater and reposted with permission. Read the original here. 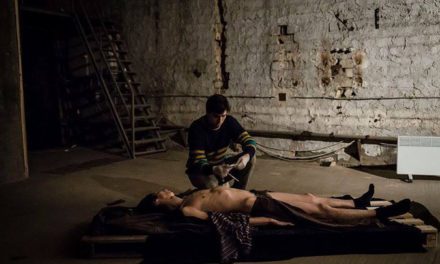 “School #3”: The Heartfelt Theatre-Based Documentary About the Kids of War-torn Donbass