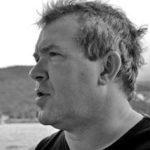 Neil Fleming writes and translates stage plays, movies and poetry. The author of "The Consultant", and "Musik", he is a former journalist and publishing executive. He is a company director of Hydrocracker Theatre Company, which works largely in site-specific theatre, and which he co-founded in 2003. His latest Hydrocracker show, "Wild Justice", produced as an animated public debate on revenge, won an Argus Angel award at the 2014 Brighton Festival in the UK. The full play is in development for a production in 2017. Neil also translates from German and French. Fish Soup, his version of Fence member Paul Brodowsky's play Stadt Land Fisch was performed in August 2005 as part of the international Tampere Theatre Festival in Tampere, Finland. Fish Soup received a second outing in 2007 at New York 's HotINK festival in January 2007, alongside Superheroes, Neil's translation of Austrian playwright and FENCE member Ewald Palmetshofer's Helden. Another of his translations, Digging, from Austrian playwright Christian Winkler's Graben, was performed at the 2010 HotINK festival. A journalist for 17 years, Neil worked in East Africa, South Africa, the Middle East and Britain, variously covering war, famine, wildlife, politics, business news, and the international energy industry.

Next week marks the deadline for the annual call for scripts from EURODRAM.