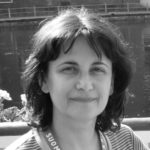 Kamelia Nikolova is a Bulgarian theatrologist, theatre researcher and theatre critic. She is Professor of European Theatre and Head of Theatre Studies Department at the National Academy for Theatre and Film Arts in Sofia, Research Fellow at the Theatre Center of the Institute of Art Studies, Bulgarian Academy of Sciences and a visiting professor at other universities. The list of her publications includes nine books, among them The Other Name of Modern Theatre. Stage Director (1995), Expressionist Theatre and the Body Language (2000), The Theatre on the Border of 20th and 21st Century (2007), History of Bulgarian Theatre. Volume IV” (2011, in a research team), Bulgarian Theatre After 1989 and New British Drama (2013), Theatre in the Beginning of the 20th Century (2015), and many studies and articles in the Bulgarian and international specialized press. She is a member of the editorial board of Homo Ludens theatre magazine, of scientific magazine Papers of BAS - Humanities and Social Sciences and deputy editor in chef of Art Studies Quarterly. She is also a member of the Publication and Communication Commission (PCC) of OISTAT, of IACT and of International Network for new dramaturgy THE FENCE. She holds PhD and DSc.

The emblem of human existence The stage has a rectangular ramp on it, covered with a large pink...