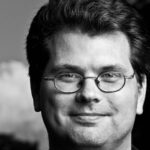 Jacob Juntunen is a playwright and theatre scholar whose work focuses on theatre’s role in forming imagined communities, paying particular attention to marginality. He is the author of Mainstream AIDS Theatre, The Media, And Gay Civil Rights: Making The Radical Palatable (Routledge 2016), and his plays are for those “who want to leave the theatre changed and moved,” as one Chicago critic described. He is the Head of the Playwriting MFA and PhD programs at Southern Illinois University, where he is Associate Professor of Dramatic Literature, Criticism, and Playwriting, as well as the Department of Theater’s Director of Graduate Studies. His current book project expands his geographic scope to examine artistic resistance to the genocidal discourse of the Nazi and Soviet regimes, particularly examining the theatre of Polish auteur Tadeusz Kantor. His reviews and articles have been published in Theatre Journal, European Theatre Journal, AngloSaxon Studies, Peace History, HowlRound.com, and several anthologies. Jacob’s scholarship and playwriting have been supported by the Fulbright Program, the NEH, Krakow’s International Cultural Center, the Illinois Arts Council, SIU’s SEED Grant, and Chicago’s Department of Cultural Affairs and Special Events. His plays have been produced or workshopped Off-Broadway, in Chicago, Los Angeles, Austin, Washington, DC, and across the U.S. and Europe.

Since 2005, the St. Louis company Upstream Theater has been providing a space for international...