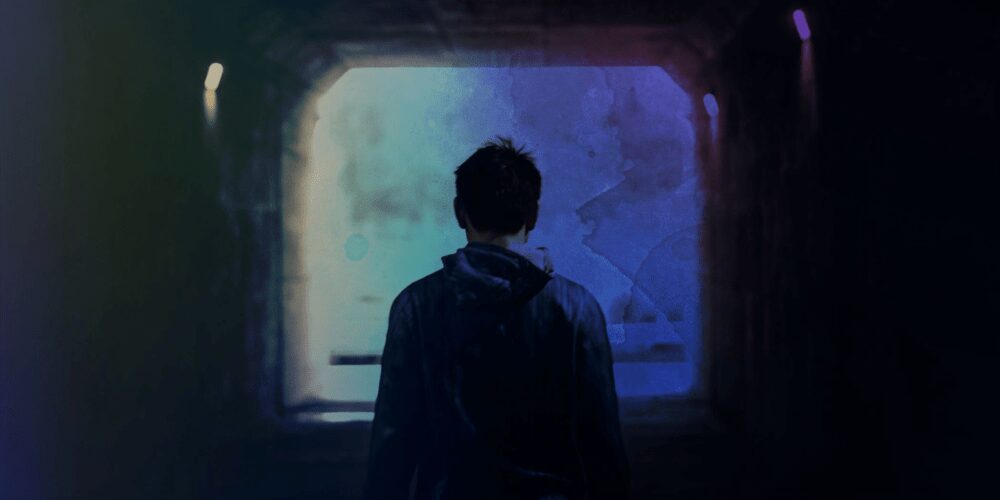 Wolves and a dark night.
The perfect match.

Those lines get me every time. From the first time I read them, in a café on the edge of my seat with my hand over my mouth, to now, three years on, when I hear not just that first thrill but also the playfulness I now know is typical of their writer.

Back in April 2018, I’d been reading my way through a selection of French plays proposed for translation by the Eurodram committee. Gens du pays was the thirteenth I looked at – and the first I couldn’t put down.

What was it about this play? There’s a simplicity to it, a lightness of touch, a cinematic sparsity that comes from having only three main characters. It takes you in, makes you laugh. There’s a sense of control that comes from the tight structure and orderly rotation of scenes. Each setting has its own name: Liar By Night in the police station, Getting to Know You for the classroom, Bring Down the Moon for the wolves (yes, the wolves).

And then that control is blown away. The sequence is disrupted, the scenes cross-contaminate, and suddenly we find ourselves watching something powerful, devastating.

The simplicity of Marc-Antoine Cyr’s writing is an illusion. Translating him has been a privilege and has allowed me insights into how he writes and how his plays work.

Getting to Know You

We set out at a gentle pace, with all the formalities the French language adds to a new acquaintance, addressing each other with the respectful ‘vous’ form as I sought to reassure Marc-Antoine of my translation credentials and longstanding desire to translate for the theatre. This was my first literary project, and I was keen to gain his confidence.

We soon established a pattern of working: I’d send a short translated extract with any questions I had on the text, and Marc-Antoine would reply generously and enthusiastically. Sometimes I’d send suggestions or options, describing the possible effects on the audience, as a way of testing what was important in the text and how much deviation from the original (with an intended effect) would be accepted.

We talked a lot about rhythm, not just about creating it (which comes easily to me) but also about moderating it and fracturing it to show emotion or create a lightness of touch (which doesn’t). This is the ‘in-between’ which Marc-Antoine taught me to find outside of the spoken lines.

Within a few weeks we were well on the way, collaborating easily (at some point slipping into the familiar ‘tu’ form) and full of excitement about what was happening to the play as it moved into a new language.

What was it about this play? There’s a simplicity to it, a lightness of touch, a cinematic sparsity that comes from having only three main characters. It takes you in, makes you laugh. There’s a sense of control … and then that control is blown away.

At an early stage I’d mentioned applying for the Foreign Affairs Theatre Translator Mentorship programme, but I’d been quite careful to manage Marc-Antoine’s expectations. Being selected seemed a painfully impossible dream. Perhaps I was too careful, because when the invitation to join the programme came through, requiring his written permission as part of the acceptance, he was nowhere to be found! (It turned out he was on a writer’s residence in the middle of French nowhere. I still have an image of him skipping through the meadow flowers as I waited anxiously for his reply).

By that stage, the translation would always have happened. But within the framework of the Foreign Affairs (FA) programme, it took on a completely different dimension.

Foreign Affairs believe in putting the translator at the heart of theatre-making – which makes complete sense when you think about how the translator has inhabited the space of the play during the translation process. It makes me think of the scene name Liar By Night, after the Alain Bashung song La nuit je mens, and the lines “J’ai fait la saison / Dans cette boîte crânienne / Tes pensées / Je les faisais miennes” – roughly, “I’ve lived a season in your mind / Your thoughts, I’ve made them mine.”

Now I had the chance to share the play with other people – and it was a complete joy to have them respond so fully and thoughtfully. From the translation mentors Paul Russell-Garrett, William Gregory and Roland Glasser, to the other translators, to the wonderful actors of the Foreign Affairs ensemble – not to mention Trine and Camila, the company’s co-artistic directors, everyone had something insightful or provoking to contribute that took us deeper into the play: are the wolves real, or a manifestation of the teenage protagonist’s anguish and mental disintegration? What is it about French politics and society that makes the subject of race so taboo? What if this play were staged in such a way as to highlight the point of view of the mother – a tiny part, but one which could hold and magnify all the emotion of the piece?

Over the six-month programme each meeting, each workshop brought a new twist in the way we looked at translation and at our plays. Some were cerebral, some physical. Each brought a shift in perspective, a new insight into making theatre.

For an emerging theatre translator, the Foreign Affairs programme is a gift. Nowhere else would you have the opportunity to see your play through each phase of its metamorphosis. Foreign Affairs has created something that no-one else in the theatre world has even attempted.

“Liberty, equality, whatever. What does France mean to you?”

The big dilemma – as with so many translated plays – was whether to set the play in the UK or to keep it in France. For months I worked on two parallel versions, which came to be known as The Garlic and The Gravy. Two things astonish me about this exploration. The first is that Foreign Affairs were so generous in giving me the time and space to come to my own conclusion. This meant that I had time to look in detail not just at what would need to be changed for this particular play, but also at the arguments for and against localising more generally. As I collaborate with colleagues facing the same question, I feel that this was a vitally important part of my development as a theatre translator.

The second thing that surprised me was how supportive Marc-Antoine was of supplanting a play that is so clearly an interrogation of what it is to be an outsider in France, starting with his own experience as a Quebecois living in Paris. Interviewed about the origins of the play, he says: “During my writer’s residence I met immigrants whose first language wasn’t French and who in many cases have escaped much more difficult situations than mine. So I decided to put my own ‘exile’ to use to express the more difficult stories of others. Starting from the stories of immigrants and second-generation immigrants, I wanted to explore how French identity is a sort of status that you can achieve, but it’s a complicated status: people from outside France bring a richness to the country, but it’s also a challenge for them because their colour and the way they speak confer a different identity on them, make them ‘other’.”

I suppose the short answer is firstly, that Marc-Antoine is always curious, always ready to explore new ideas, and secondly, that while the play so obviously lends itself to a wider reading, to an international context, it does not itself need to be uprooted to do this.

Tonight we bring down the moon

January 2019: the showcase. Our plays are spoken, embodied. The text is an irrelevance: the play is alive, here and now, in this moment, for this audience. Actions, emotions: something felt, something shared. We’ve made it!

For an emerging theatre translator, the Foreign Affairs programme is a gift. Nowhere else would you have the opportunity to see your play through each phase of its metamorphosis. Foreign Affairs has created something that no-one else in the theatre world has even attempted.

From great highs to great lows – the shape of things in the theatre world, and indeed in freelancing generally. At the end of the two nights I was bereft. I can’t remember who it was – maybe Camila, maybe Paul, who said “I’m sure we’ll be seeing more of you” – but I hung on to those words as if they were a spell. The following night, a huge orange moon hung in the sky. A wolf moon.

And sure enough, the charms work their magic. With spring comes word that Foreign Affairs want to produce the play in full. A year later, we all finally meet: Marc-Antoine, Camila, Trine and I, together with the wonderful actors who will play the characters. It’s the first time Marc-Antoine has heard the English version aloud. He laughs a lot. We drink tea, then a beer. It’s as if we’ve all known each other for years.

Fragments of lockdown. People die. People clap. We are scared. We are safe. We are together. We are falling apart.

Amongst all this, I translate three more plays, including another for Marc-Antoine. On a Zoom call he lifts his laptop out of the window and shows me his deserted Paris street. Foreign Affairs ask us to do a talk as part of their 10th birthday celebrations, and invite me to be a mentor on the next programme. They launch the Foreign Affairs Theatre Translator Lab – a space where theatre translators can meet, collaborate and learn; a total lifeline in these long months of separation.

And then it is now.

Where I Call Home

The Foreign Affairs production of Where I Call Home has been a long time coming. But it will be all the sweeter for the wait. While we’ve been apart and theatres have been in darkness, the FA community has grown, friendships have sprung up and trust has deepened.

As we prepare to go into rehearsal, an emotional few weeks lie ahead. We’d be lying if we said we weren’t nervous. To up the stakes, the French productions of Gens du pays have been postponed, making this the world premiere of the play. It’s going to be terrifying… and brilliant. And at last we’ll be back making theatre: where we call home.

This article was originally published by Foreign Affairs, and has been reposted with permission. To read the original article, click here.