When The Space Is The Protagonist 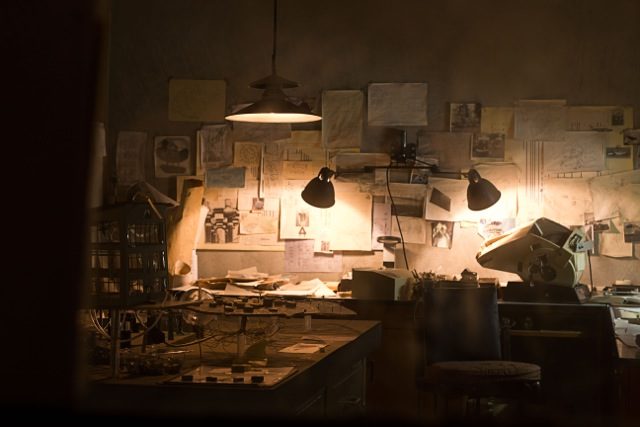 Mona el Gammal studied scenography, stage design, and exhibition design at Karlsruhe, Hochschule für Gestaltung ZKM. She started there in 2008, building narrative spaces, and since then creates with her team parallel worlds that incorporate the audience and turn them into protagonists. Lately, she also directed the Virtual Reality Experience RhizomatVR, commissioned by Arte and Berliner Festspiele, that takes a critical look at the new digital medium.

How do you define the narrative space?

I do not have a clear definition. I use it for 10 years, but it was used for very different kinds of work in the last few years.

For me it describes a space that tells the story via what you see, hear, smell and feel. No acting. I work in a lot of detail, you can open every cupboard and the story goes on. You are guided by light and sound through the spaces and through the story. There is a lot of text coming from acoustic media, but you can also read a lot. It is a story unfolding with every step you make. 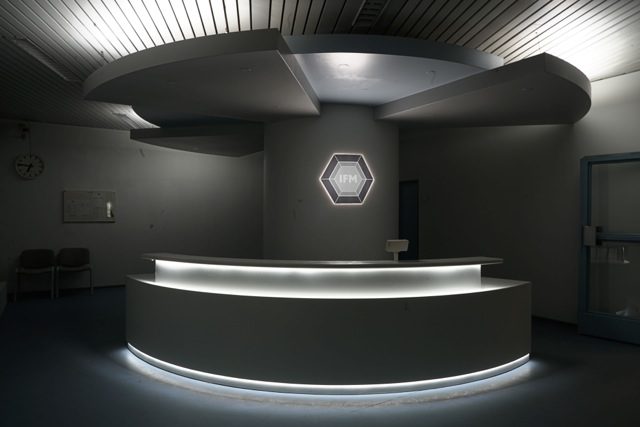 Do you consider that your spaces can resemble walking simulators?

I always have a problem with this comparison, but actually is not my task to put these in brackets. I don’t see it related to games, I see it more related to books. For me, it is like jumping into a story. In a game you are quite free you can walk back and forth as much as you want. But as I perceive games, you have to find the key to open the door. I played some games but I see that my spaces are working in a different way because my story has a strict dramaturgy.

The story develops from point A to point B and C and you don’t have the possibility to change that. For example, in Rhizomat, once you are down you can’t go up anymore. You can compare it to the levels of a game, but I think it is different, you can go a little bit backward (and read it again, like in a book ), but you cannot really change the game.

For me, the original idea was to jump inside a book. For the first two narrative spaces that we created we didn’t actually write the story, we worked with existing literature. Today we write the stories on our own because we feel the urge to tell these stories. I’m working with the author Evol M. Puts and we go through a lot of texts. I get my inspiration more out of books and texts than out of games or films.

Normally there is a topic. Since 2013 we have been working on a bigger plot/narration. Now we are starting to work on the third part. Since my childhood,  I’m very concerned about how our world is developing. I read a lot of sociology. And that is the starting point for me.

With the latest story that includes Haus Nummer Null, Rhizomat (and now the third part), the idea was to find out how things could be changed (even though I am not sure if art is the right discipline to try to change something, but that’s another topic.) We need to first look at what is going on and what is going wrong, to then get to the questions what and how to change. That was how we developed Haus Nummer Null: we analyzed the actual state of things and made them a bit more visible for our audience in the story we told. The press reported about our dark futuristic image but we are actually already there, things we showed were not as futuristic.

How do you start to work on your spaces? Do you have an image in your head?

I’m researching a lot before every creative process. Before Haus Nummer Null I never really read science fiction–so suddenly I had this huge choice of great sci-fi literature. Apart from that, we were reading a lot about the food industry, climate wars, the selfness-culture and about the development of technologies. I was f.ex. petrified when I found out that you can already measure your brain activities and can have pictures of it (in 2013) in Asia. So we “developed” this dream recording machine, that would be in the last room and play Mrs. N.s last thoughts and dreams. This is about how it works.

I got to know Black Mirror in 2017, it would have been easier to know it before (laughing). No, I spend some time in the Mediatheque in Cologne, where I watched a lot of old sci-fi media–great inspiration.

What I do, is really not conceptual art. It is not reduced at all and I don’t try to make it cryptic or not understandable. I would love to reach all kinds of people. I don’t want people to need to read long texts to understand what is going on in that “art.” I want to make it easy to understand because it is already a lot for the audiences. They are inside, they are alone: this is not a very comfortable situation, so they have to understand immediately.

What was your strategy when you made the VR-film for Rhizomat?

My main problem is that we are extremely unreflected about the technology. I see VR very critically, but we still decided to make the film, because we wanted to bring some critical content into the whole VR scene. The movie’s story resembles what you would experience in the narrative space: you will have a standard examination without knowing what it is and then you find out that it is a thoughtful reading and deleting process, etc. I didn’t want to ignore the glasses itself, so I made them the protagonist. So its a little bit like the inverse of Carpenters “They Live,” but here you need to explant the glasses to see “with your own eyes.” So the main idea was to produce a VR film that takes a critical view of the medium.

There are very few people who are concerned about this technology and about what it could bring. There is no interest to discuss it, because of the huge commercial interest. There is an article by Madary and Metzinger that I highly recommend: The Code Of Ethical Conduct. It is very important.

What is your main concern about the medium of VR?

Apart from that, we don’t know what it does to our physical and state of mind? I do agree with Madary and I do not think that people are a lot more “media competent” compared to the last decade. There is not enough critical distance. For people that are already vulnerable, also and especially children, it has huge risks. Also for the social development of societies.

And mainly, we are not concerned enough about this huge monopolization that goes on worldwide. Most of these technologies are in the hands of Google and Facebook. I don’t think that the knowledge they collect about our attention and emotions (via eye-movements etc), will be used to make “a better world,” it will be used to push consumption even further and also in other new directions.

It is just not the right time to disappear in virtuality but very important to see what is going on in reality. People are already now so occupied watching their series and their small machines, that I don’t think it will get better if we become immersed in these completely, most of the time. 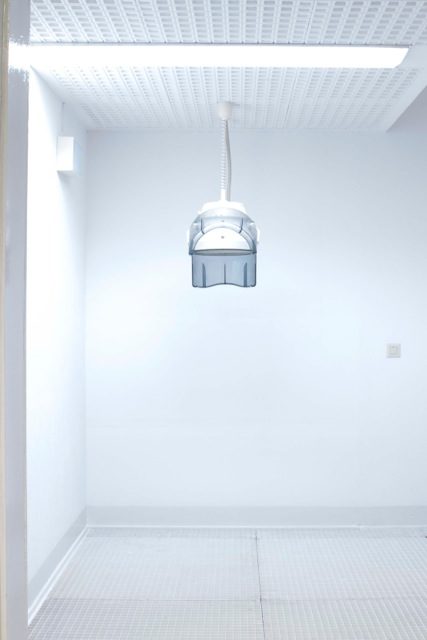 So you are not aiming for a “total immersion” in your work.

On one hand, I think that with everything that is pushed onto us people, we are getting very numb. So we use immersion artistically to reach out, to give people an experience that feels very real in the hope, that this makes it harder to ignore the content of it. But you buy a ticket for it, so you know that it is artificial. And that gives you the possibility to reflect on this artificially built world, on the immersion, when you get out of it.

I think the “total immersion” is more f. ex. whats happening with Facebook.

I agree with it. Visible interfaces are helpful, but in branding, they are disappearing, and then the whole message is immersing us.

We create immersive experiences and send people in this extremely artificially structured world and when they get out they are maybe sensible for seeing that our reality is also completely constructed. And the logical consequence is, that it is also changeable.

Can you still imagine that you are constructing a space where you don’t use any verbal element, neither writing nor radio plays?

Never say never. But I’m very occupied with content and complex content without language is very difficult. It is not understandable for everybody or you need a lot of art theory to explain it.

Do you have any further plans how to communicate your concerns?

Yes, different things are planned, but I will not talk about it now. We would like to find ways to reach people that are normally not so involved with art and we search for ways to reach more into reality. Let’s see…

This article originally appeared in Zip Scene Magazine on April 23, 2018, and has been reposted with permission 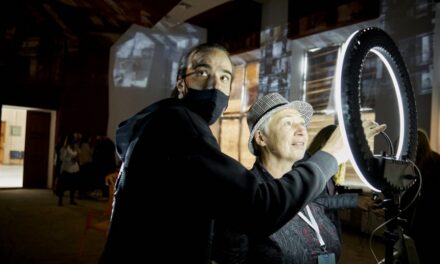 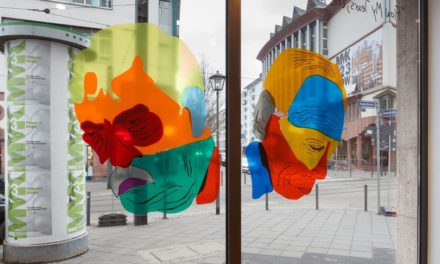 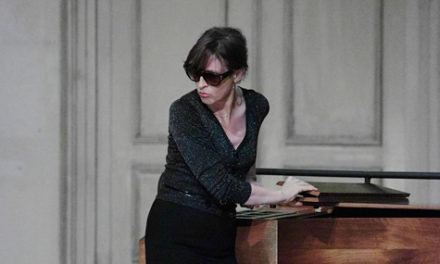