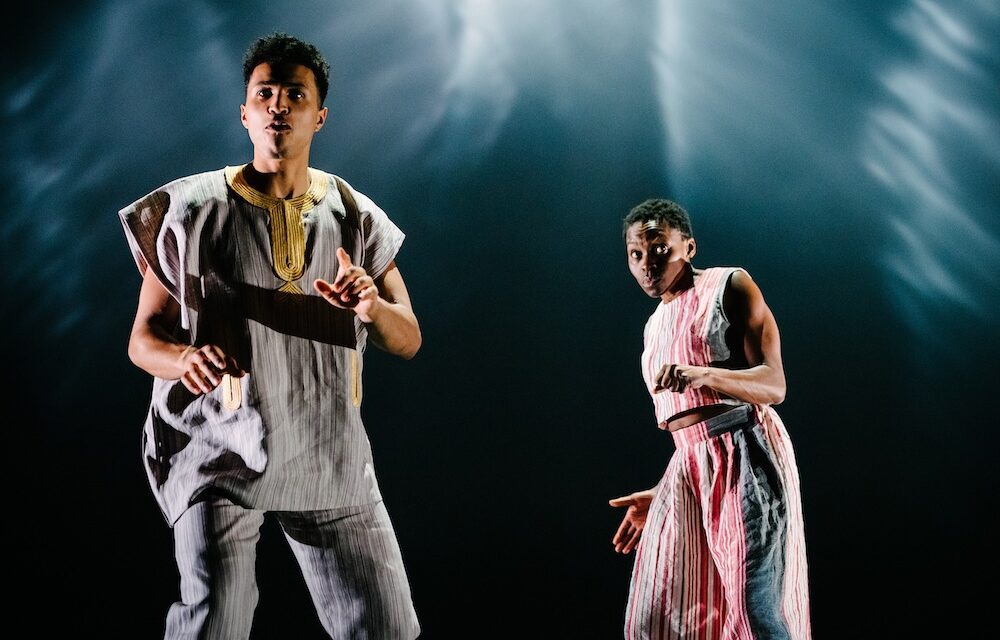 Kwami Odoom and Rakie Ayola in the "Half God Of Rainfall." Photo: Dan Tsantilis

If British theatre often seems to lack ambition, the same cannot be said of The Half God Of Rainfall, a galaxy-hopping mythological mash-up. Written by Inua Ellams, whose Barber Shop Chronicles was a big foot-stomping hit for the National in 2017, this epic story trips across the globe and the sphere of myth, combining Yoruba gods with ancient Greek deities. A co-production with Fuel and Birmingham Rep, where it opened earlier this month, its arrival at the Kiln in Kilburn reaffirms the ambitions of this venue to stage stories that combine the everyday with the mind-blowing.

The story starts in Nigeria, where young Demi has been banned from playing basketball because he is the “town crier”, whose tears are so copious that they form raging rivers and turn the earth into mud. And when he loses, he cries with rage. But why are his eyes so tidal? So rainfall-inducing? Well, it’s simply because Demi is a demi-god. His mother, Modupe, is a mortal Nigerian woman whose astonishing beauty once attracted Zeus, the lecherous god of gods, and he raped her. It’s a chilling scene. As a result, Demi her son is half-god, half mortal. When he eventually gets to play basketball, he is so good that he rapidly makes the national team.

But Demi’s success at sport poses a problem. Apparently, he is not the first demi-god to excel at physical exercise and the older gods have got fed up with this excellence. Now there is a rule that demi-gods are not allowed to compete, so Demi — who has an eye on the 2012 Olympic prize — is fated to miss out. Unable to accept this setback, he decides to challenge Zeus directly. But confronting the greatest of the deities is not the smartest of moves, and there are no prizes for guessing how this conflict ends. But neither god nor demi-god has bargained for Modupe, who decides to exact revenge on the almighty for her abuse.

Ellams writes with a really wonderful mix of storytelling and poetry, taking us on a majestic journey in which an archetypal gifted individual takes on the mighty villain. A central theme is a male power, symbolized by the toxic masculinity of some of the Olympian gods, and the playwright shows how female mortals can become agents of their own destiny despite bad experiences and impossible odds. (With a little help from female deities such as Hera, Zeus’s wife.) This is a neat way of showing how ancient myths have made men behaving badly socially acceptable. At its best, Ellams’s writing soars like Icarus, then hangs trembling in a blaze of glory, before landing gently with the aid of a wry comment. There are great jokes about sports celebrity, American culture, and traditional myth; I love the bit that imagines a sports coach quoting Sun Tzu’s The Art Of War.

The metaphor of water pervades the 80-minute play. It pours through the poetry, moistens the tear ducts and creates oceans of feeling. Rivers, floods, deluges, and seas appear on almost every page. Here nature is the big force that shapes the lives of poor humanity. And, amid the cool dance moves and even cooler music of this production large shadows of a mythological landscape can be glimpsed, a place where gods sport with humans, using us as their playthings with scant regard for the consequences. And they simply don’t care: at one point, Greek and Yoruba gods have a fight, and Aries the god of war just sits by, idly watching them. On Earth, it is the exhilarating beauty of the sport that makes us feel god-like.

Although the story has a disarming simplicity, it flies because of the vigor of the text and the electricity of this exciting production, which soon picks up whenever the energy slackens. Director Nancy Medina uses Max Johns’s bare set well, helped by Jackie Shemesh’s lighting, which drenches the action and pools in the calms. But it’s the cast — who play all the piece’s many personages — that makes this two-hander soar: Holby City’s Rakie Ayola makes Modupe a mixture of dignity and fierce pride — it’s a clenched fist of a performance. You really feel her pain. By contrast, Kwami Odoom’s Demi is an athletic youngster who convulses as he lives the dream of success with the Golden Gate Warriors before he attempts to play the superhero. But this titanic ambition pales beside Ellams’s depiction of female love, pain, and rage. An inspiring evening.

The Half God of Rainfall is at the Kiln Theatre until May 17.

This article appeared in Aleks Sierz on May 2, 2019, and has been reposted with permission. 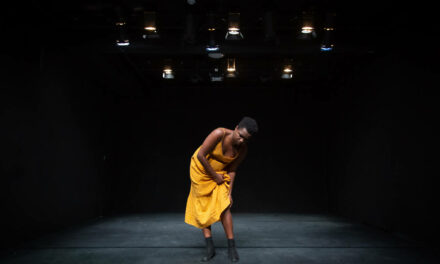