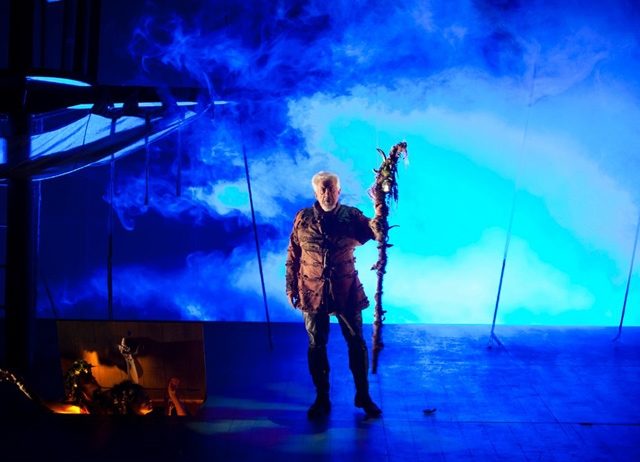 In her article, “Performability versus Readability,”  Greek-Canadian translator and translation scholar Ekaterini Nikolarea offers a historical overview of the development of what she calls a “theoretical polarization” in theatre translation, between the notions of “performability” and “readability.” In doing so, she places two authors – theatre theorist Patrice Pavis and translation studies scholar Susan Bassnett – in opposition against one another, as spokespeople for the two conflicting perspectives.

In this context, Pavis is posited as the advocate of “performability” (a term which, interestingly, Pavis himself doesn’t seem to have ever employed in his writing on theatre translation) while Bassnett is positioned as the champion of “readability” (although again, this is not a term which Bassnett herself employs). The fact that neither Pavis nor Bassnett make use of the terms that Nikolarea attributes to them should alert us to the fact that her “historical overview of a theoretical polarization in theatre translation” is in fact an artificial construct; indeed, although it cannot be denied that Bassnett makes Pavis a target for some of her sharper criticisms in her article “Translating for the Theatre: The Case Against Performability,” I would propose that the two authors are actually approaching the question of theatre translation from two different angles – one from the perspective of the stage and the other from the perspective of the text – and that the supposed conflict between them is based largely on a misconception regarding Pavis’s theoretical standpoint.

In describing the development of the debate in the 1990s, Nikolarea locates Patrice Pavis at the “performability” pole, based on his argument that translation for the stage needs to be undertaken “with a mise en scene in view” (Pavis 136). Nikolarea thus equates the notion of “performability” with Pavis’s concept of mise en scene; however, I would argue that the two concepts are not the same. Ironically, it is Susan Bassnett who, in attacking the concept in the abovementioned article, gives performability its most elaborate definition. According to Bassnett, the term is applied broadly to refer to some vague notion of “the supposedly existent concealed gestic text within the written” (Bassnett 102). But Pavis’s notion of mise en scene is something more concrete, referring not to some hypothetical performance that the translator must somehow extract from between the lines of the original text, but to an actual “situation of enunciation,” i.e. a future staging of the translated play. It is worth highlighting that in his argument that translators need to consider the mise en scene, Pavis explicitly refers to translation “for the stage” (136), differentiating it from theatre translation in general. His focus is clearly on plays that are translated for the purposes of a specific presentation. There is no reason to believe that he, therefore dismisses the possibility that theatre texts may also be translated to be read, in which case, obviously, the mise en scene would not have the same significance. In her article, Nikolarea sets Pavis’s perspective within the context of Anne Ubersfeld’s notion of theatre text and performance as “indissolubly linked”, but Pavis doesn’t appear to share this view. According to Ubersfeld, it is the “incomplete” nature of the theatre text that distinguishes it completely from any other type of text; Pavis, on the other hand, gives the theatre text no such special status, but rather seems to view theatre translation merely as a genre within the larger category of literary translation, as he suggests that the dimensions the translator must consider in translating a theatre text are the same as those for the translation of any other kind of literature.

Bassnett criticizes the advocates of “performability” for their vague notion of a gestic dimension being “somehow embedded in [the] text” (Bassnett 99); according to Bassnett, to expect the translator to extract this “gestic text” and graft it onto the translation is too much to ask, as the responsibility of decoding gestic text lies with the performers. She interprets Pavis’s claim that a translator must consider the mise en scene as making just such a demand of the translator, but Pavis doesn’t actually suggest that the mise en scene is embedded in the text of the original, or that translators have the responsibility of extracting it. Rather, the translator’s task consists simply in “making the mise en scene possible” (Pavis 145), in providing the space necessary in the translated text to allow the directors and actors to create it. This is clearly what he means when he refers to the need for the “economy” of the translated text allowing actors “to supplement the texts with all sorts of aural, gestural, mimic and postural means” (144). In other words, Pavis actually agrees with Bassnett that it is the performers who are responsible for decoding the gestic text, and, although the translator must be mindful of how the text might be performed on stage, this “does not necessarily mean that the mise en scene is predetermined by the text” (146).

In the conclusion to her article, Nikolarea suggests that the polarization between these two concepts is not realistic, as in reality “there are no precise divisions between a performance-oriented translation and a reader-oriented translation.” I have attempted to show here that in fact, the theoretical polarization that Nikolarea describes doesn’t really exist anyway because the supposed proponents of the two concepts are actually talking about two different things. While Bassnett, coming from the tradition of text-focused translation theory, is concerned with the text that translators must produce, Pavis, coming from a tradition of performance-focused theatre studies, is interested in how the translation will be staged. The dichotomous opposition of the two authors is essentially an artificial construction on the part of Nikolarea, aided and abetted by Bassnett herself, who erroneously identifies Pavis as an advocate of Ubersfeld’s notion of the inseparable nature of theatre text and theatre performance. But Pavis doesn’t even appear to participate in this debate; his only interest is in the question of how a theatre text intended for the stage needs to be translated, and the aspects the translator needs to consider in order to create the space necessary for the mise en scene to be realized by the director and performers. The fictitious polarization between these two authors can be easily reconciled if we consider that Pavis’s perspective is in fact best summed up in a statement made by Bassnett in the conclusion to her argument against performability:

“Theatre texts cannot be considered as identical to texts written to be read, because the process of writing involves a consideration of the performance dimension,” (Bassnett111, emphasis added).

In other words, as Pavis would describe it, a consideration of the mise en scene.

This article was originally published on Diagolos.ca. Reposted with permission. Read the original article.