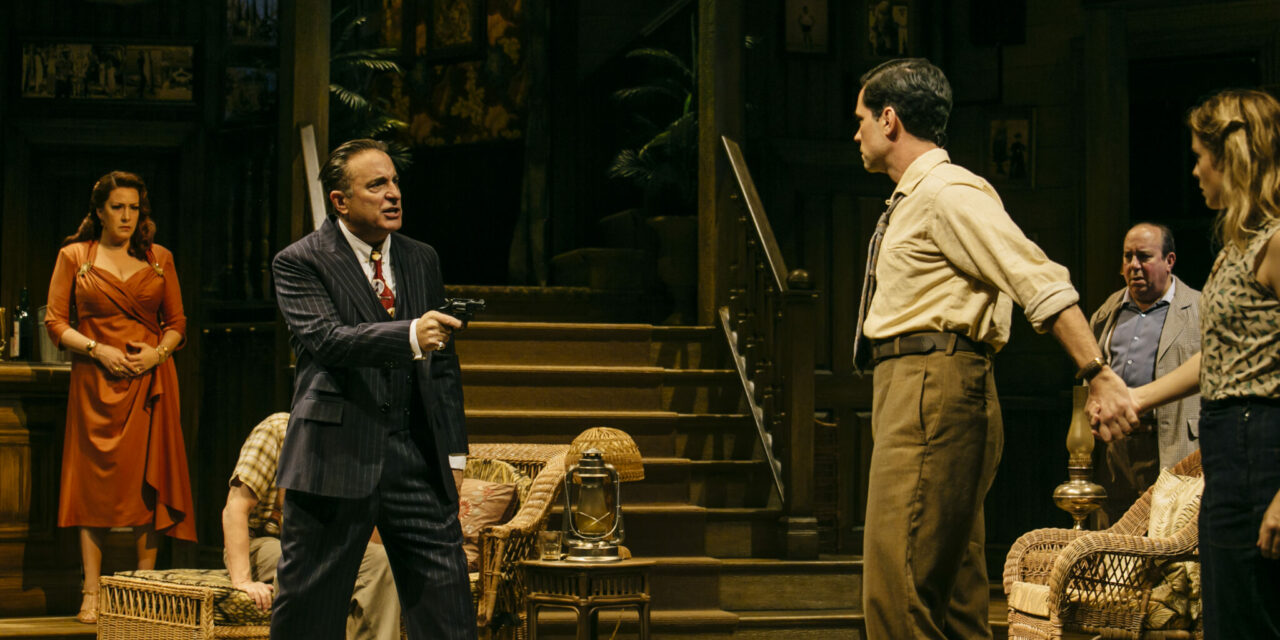 Mr. D’Alcala: If the time ever comes when your kind can walk a city street in daylight with nothing to fear from the people —

What goes around, comes around, in more ways than the original author of Key Largo might have ever expected (Maxwell Anderson) when the play that premiered in 1939 at the Ethel Barrymore Theatre (and ran for 105 performances) was later adapted into the 1948 Bogart/Becall/Huston film that has again been adapted to make its dramatic, latest debut at Geffen Playhouse in Westwood. Jeffrey Hatcher and Andy Garcia have crafted the script with direction by Doug Hughes in a production that does not shy away from any opportunity that might possibly draw correlations between the villains in its time and a particular leader in ours. 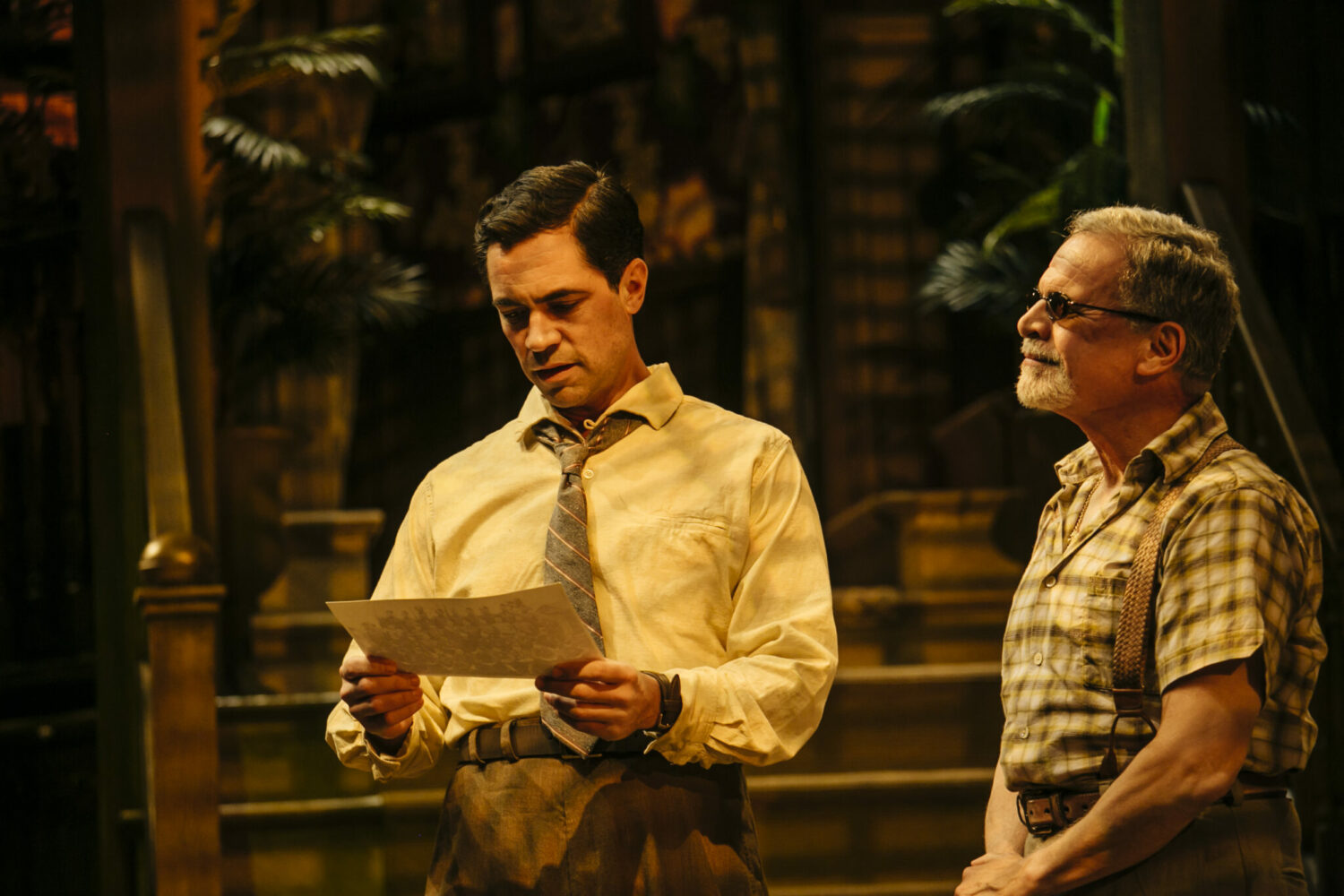 Any fan of John Huston’s films knows his work is often rife with tension-filled glances across crowded rooms where characters carve out what little privacy they can in the face of glaring oppression (if not truth). With no easily accessible visual record of the 1939 Broadway play (if any are extant) we are left instead with Huston’s film as record of this story’s capacity to hit us where we live and there is never a moment in that film where we do not feel the danger, whether it be from the actual storm outside or the human-driven storm within the hotel with Johnny Rocco at the violent epicenter.

Where Huston had Edward G. Robinson, the Geffen has Andy Garcia, and his portrayal of Johnny Rocco is the play’s strongest asset. A lesser actor would have relied on an effort to inspire sheer, relentless terror to endow his character with the kind of power Rocco needs to command this particular stage but Garcia knows when to back off, when to hit us with his charming presence (I dare you to defy it), and when to threaten us with his worst. Where Huston’s Robinson turned out to be a dealer in counterfeit cash, Garcia turns out to be a dealer in what we can only assume is cocaine.  Where Robinson’s belief that he could be President one day seems like the inflated assurance of a man whose power has not yet taken the belief of the American people into account, Garcia’s villain here is a man who is one hundred percent assured that he has the votes to carry him – and it is more than tempting to fear that he’s right. 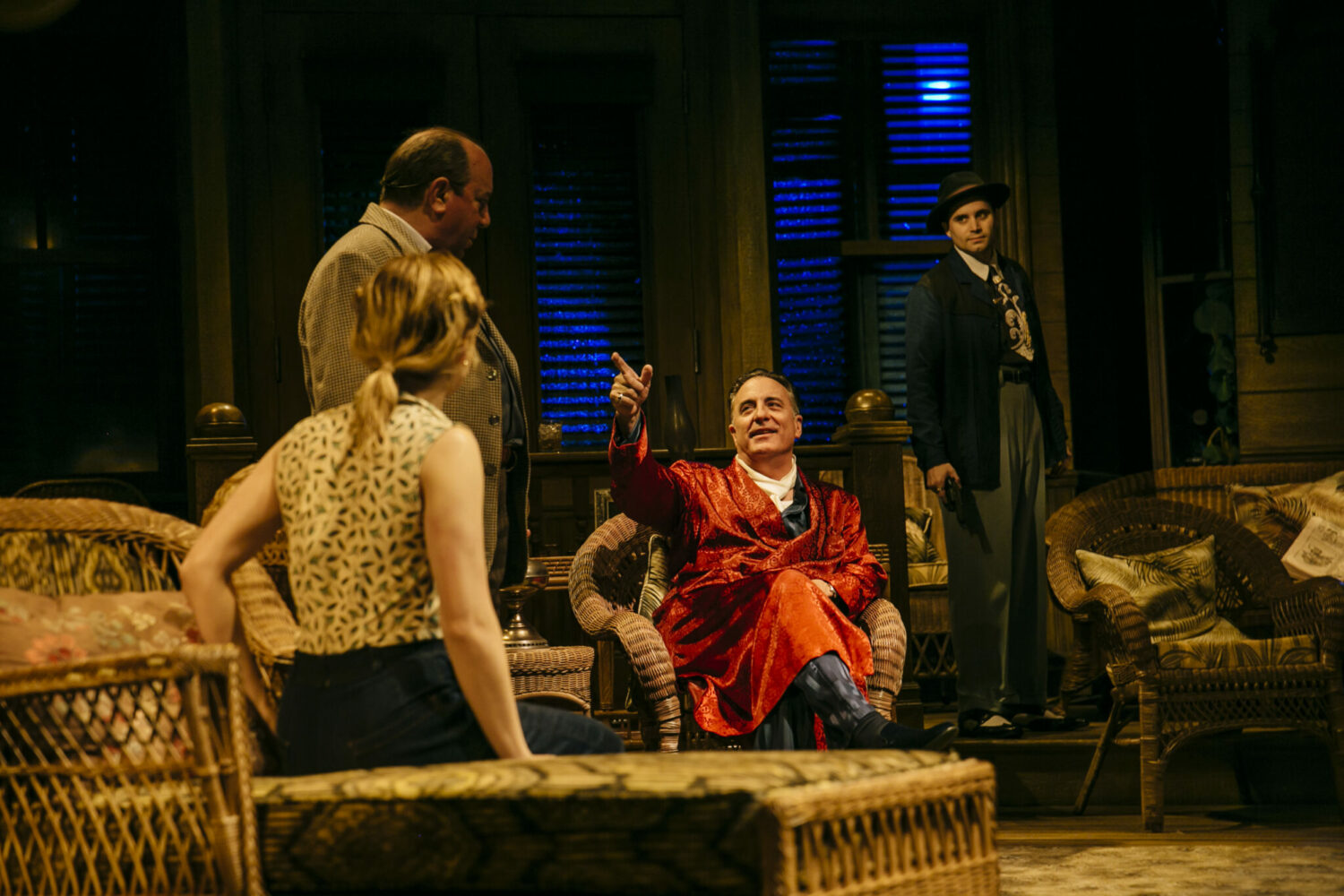 And that’s one of the biggest issues with the play; it doesn’t shy away from what might have looked like a bucking horse of a metaphor for a reality we are all struggling with. There’s nothing subtle about the correlation and via that lack of subtlety, the play lets this monstrous figure that is Johnny Rocco not only buck its rider near to death but also allows it to leap into the grandstands and buck a few audience members right in the head for good measure. If you look at Huston’s film and if you look even more closely at the date of the first play’s premiere and the film’s production you have more than enough reasons to believe the creators of both were trying to send a message – in a play/film-shaped bottle. Nora and her father-in-law and her (we assume/hope) soon-to-be-wounded-warrior-of-a-husband are all good guys and their innocence has enough fuel to win. As Frank McCloud says, “Yes, I had hopes once, but I have given them up.” – to which Johnny Rocco has enough innocence of his own to ask (without irony) “Hopes for what?” – and Frank can only answer “A world in which there’s no place for Johnny Rocco.” Sixty-plus years ago, we still had room for a Johnny Rocco who wasn’t 100% evil just as we had room for a Frank McCloud who wasn’t 100% good (we never can tell in the film what he did or did not do in the war) but this updated version nearly eliminates that room and in the effort to make either character completely fit their bill as villain or hero, the play ultimately fails to move us to ask the questions it seems so desperately to want to inspire. 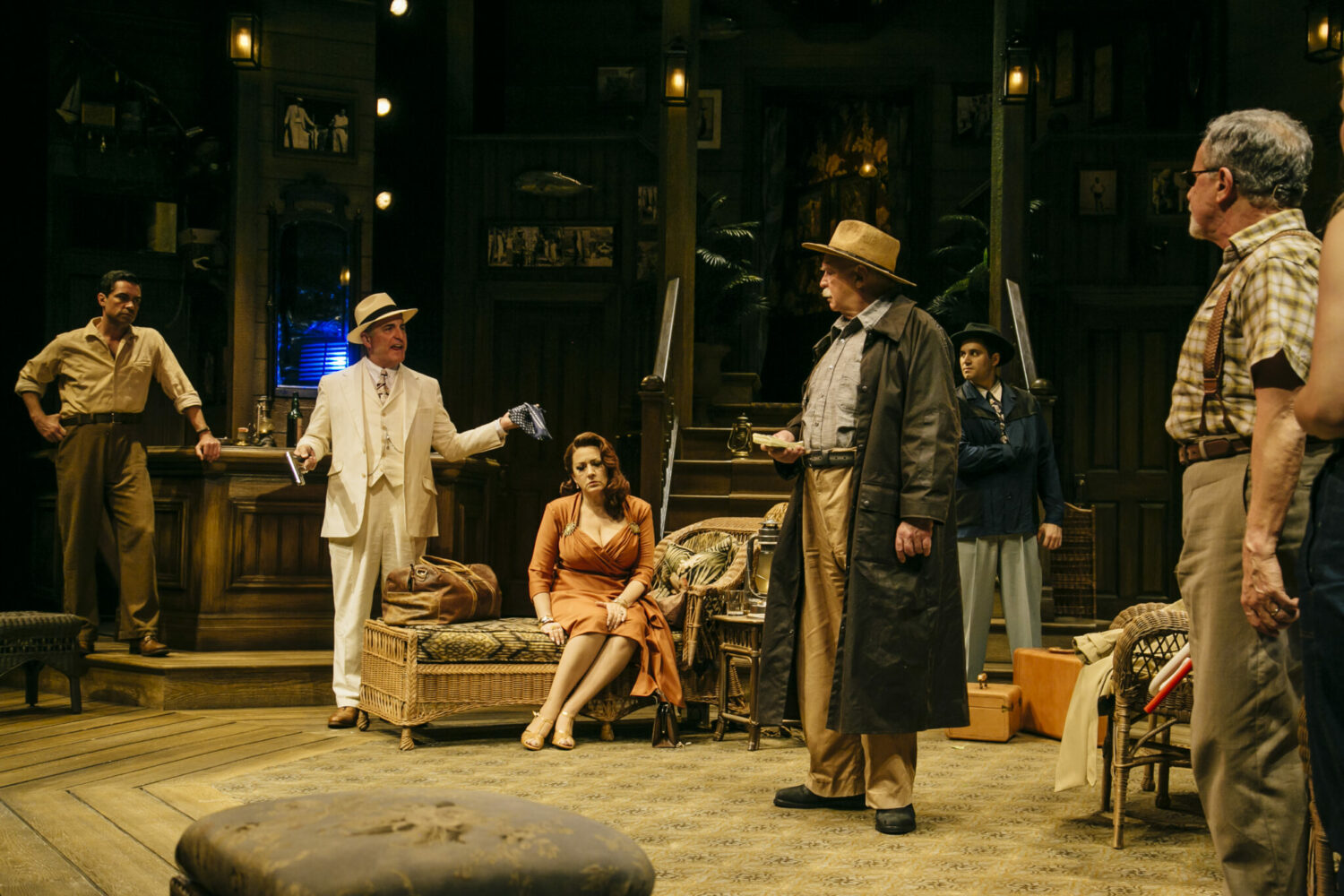 Here we have an ‘updated’ version of the story that turns a white man in a wheelchair into a Hispanic (it seems) man who is blind (why? maybe it was in the original play, the text is not in hand) and a narrative that not only terrorizes the women in the story on a whole new level but also removes any agency they had in the film. As Mr. Temple in the film, Lionel Barrymore is at least granted a shot at trying to fight the able-bodied Robinson in Huston’s film but in this play, we witness a painfully long scene where Garcia’s Rocco taunts the blind Mr. D’Alcala (played by Tony Plana with an admirable and passionate level of commitment), ultimately giving the character no chance because he’s not only unable to find him in the room but also has his cane taken away – and broken – and if you want us to believe one of the final moments in the play, that is the hardest beat to swallow. Even harder to accept is the manner in which Rose McIver’s Nora is dealt with. At one point, Rocco has her in his arms, his hands on her breasts in a threatening beat where it looks like he could snap her neck if he wanted to and yet she is allowed to not only walk away from that moment without any seeming sense of lasting emotional repercussions, she continues to exist in the same small space with Johnny Rocco without our having the slightest sense that she feels the danger of his proximity. It simply does not scan, and Rose McIver is a stronger actress than that. 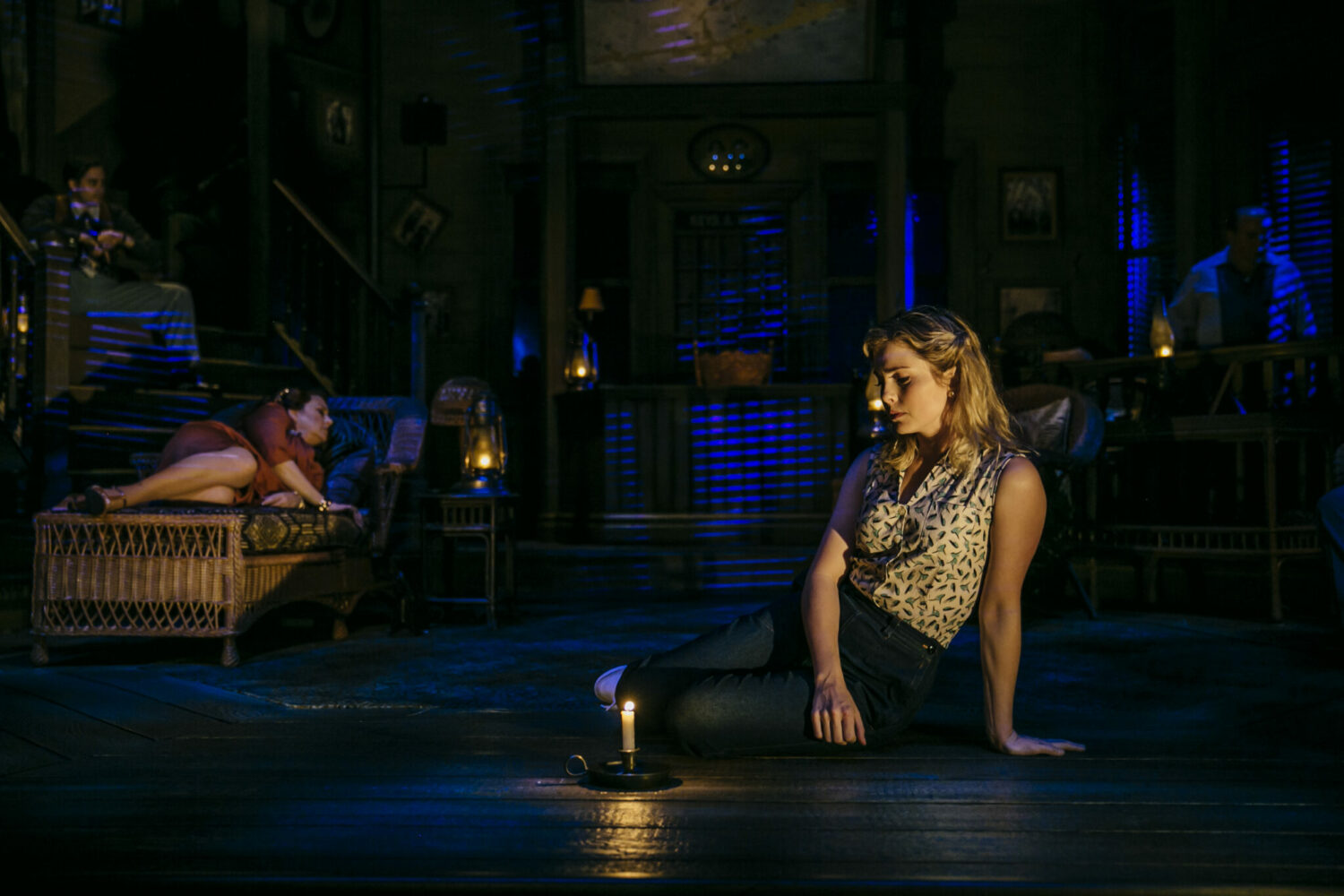 In addition, it seems McIver’s Nora has no interest at all in her husband’s fate. In the film, Becall’s Norah manages to maintain what seems to be an obvious interest in Bogart’s Frank McCloud from the start without it looking as though she were ashamed to meet him. That could be due to a choice to add scenes in this production between Frank and Norah where they both come clean; he admits his cowardice/good luck at not being in the line of fire when Nora’s husband died while she admits she never loved the man and neither admission earns them any credit. At this point, I readily admit I’m prepared to have many arrows slung at me for bringing up the film so often but this is Los Angeles and the film matters here (it should matter everywhere, but that’s a different argument for a different time).  In a moment where James Dean is about to come to life (whether anyone likes it or not) in a movie made x-number of decades after his tragic death, one cannot argue that these actors and the films that they made do not matter – we wouldn’t try to bring them back to life if they did not. This play could have brought thematic strains of the film vividly to life had it not entirely missed those themes and any sense of sustained tension within. It does Garcia a disservice to diminish his sense of immediate threat every time an actor turns his back to him (something that happens far too often, honestly). Andy Garcia deserves the same sense of palpable threat that Robinson earned in the Huston film and with a stage this large, with that much of a set, it is startling to note that no effort was made to carve out those small, intimate spaces that could have made this production shine. The cast is strong, yet something is amiss. 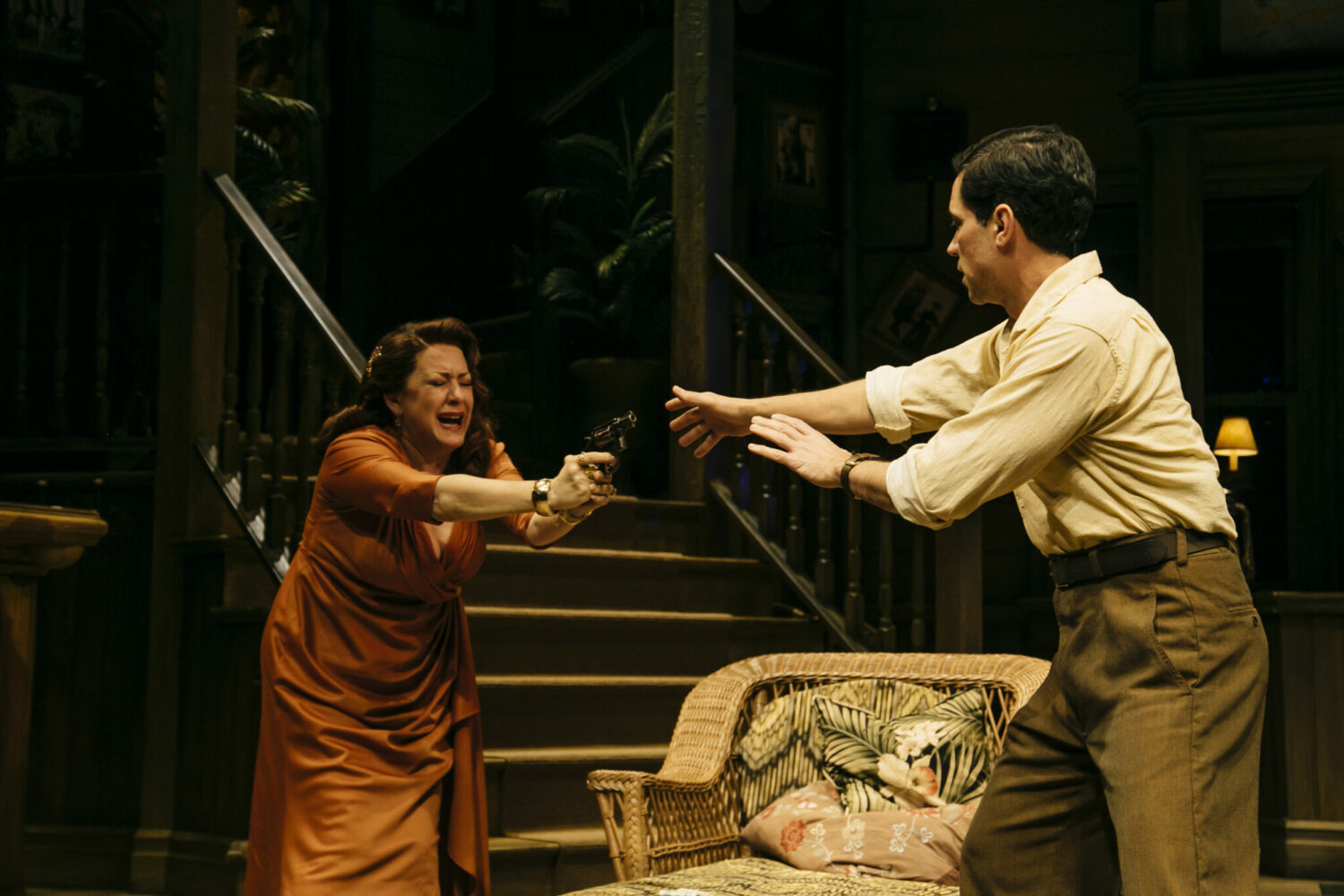 There’s one key missing factor that, again, could have been in the 1939 play but was (in this author’s opinion) corrected in the 1948 film that is frankly upsetting for its loss here.  The women have zero agency. When Rocco tells us in the film that he doesn’t want any trouble, we believe him. When Garcia tells us that, he seems not only ready to throw down with anyone who crosses his path but equally ready to handle it with ease. We wonder why he doesn’t just shoot everyone in the hotel that isn’t part of his gang. As Frank McCloud, Danny Pino is as cool as a cucumber with no sense of an emotional reaction to the threat that Rocco poses to Nora or anyone else in the hotel. The Indians that, admittedly, create a troubling series of dramatic beats in the film are reduced to unseen figures trying to get in a door and that is almost more alarming than anything else we experience. As Gaye Dawn, Joely Fisher has a kind of presence that draws our eye to her over and over again and leaves us wishing she had more to work with for though she does an admirable job of failing to perfectly sing “Moanin’ Low” (you can tell she has an enviable voice) she has also been robbed of not only the vulnerability we so long to see in that character but also the most impressive if not rebellious moment we could have hoped for when she is not allowed to retrieve the gun from Rocco’s pocket without him knowing about it and is merely reduced to honestly crying about being left behind. It’s an infuriating moment that diminishes her – even if you don’t know what she is allowed to do in the film, there is nothing honorable about what the play does to her.

Overall, even though it might have felt like a cop-out to those involved, one could strongly argue that more would have been gained by opting for a production that literally translated every beat of Huston’s film onto the stage, especially with this cast. Speaking of the cast, in addition to Garcia’s strong performance and to Plana’s commitment to a role that gives him little to do, Louis Mustillo often steals the show as Curly – a character portrayed by Thomas Gomez in Huston’s film. One can easily credit that to the fact that Mustillo seems like the most grounded, the most natural, the most honest among the talented bunch of actors on the stage. If everyone had been tuned to that level, this might have been a startling, and extremely relevant, achievement.