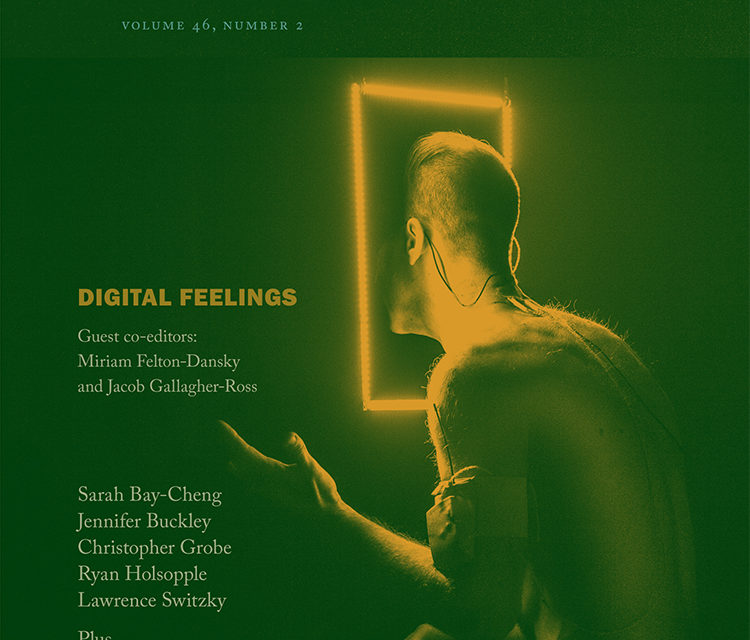 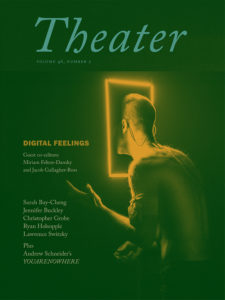 Theater, Yale’s journal of criticism and performance, launched its special issue on “Digital Feelings” (Theater 46, no. 2). Curated as a sequel to the 2012 explorations of “Digital Dramaturgies” (Theater 42, no. 2), the latest issue of Theater Magazine continues to push the boundaries of the critical discourse on performance and digital technologies. Guest editors Miriam Felton-Danski and Jacob Gallagher-Ross focus their scrutiny on nascent affective structures engendered by digital media. “How does the digital sphere script new emotional experiences or give the old ones a new twist?” the editors ask.

Contributors take on the challenge of feeling up the digital experience. Taking a step back into the nineteenth-century, Christopher Grobe demonstrates how our current attunement to the impact of new media on human ways of acting (on stage and off stage) can rewrite the imbricated histories of theater and digital technologies. Grobe unearths the nineteenth-century trend of “telegraph-plays” — “i.e., the theater’s earliest incorporation of digital media” — to illustrate how new technology on stage alters the structure of theater and reshapes acting styles, a refraction of how media ingrains new mental habits and bodily stances. At the same time, however, when theater stages technology “it refines — sometimes even invents — the feelings that attach to them.” The history of media and the history of theater conjoin.

In the article playfully entitled “Long ‘Live’ Theater,” Jennifer Buckley feels the pulse of time and togetherness in Forced Entertainment’s four durational performances live streamed in 2014. The global, virtual audience to the live streamed performances joined the events in an influx of exclamatory, effusive tweets. With affects streaming through the network, digital audience engagement looked anything but disconnected and diffused. On the contrary, many spectators testified that digital participation created for them a strong sense of community. Buckley explores the question of “how and why media felt like theater to tweeting spectators,” and challenges the still prevalent assumption that theater is defined by the bodily presence and co-presence of actors and spectators. “The definition of presence has irrevocably changed,” argues Buckley “— and so must our definitions of theater and performance.”

Lawrence Switzky makes a case for “Transmedia Ethics,” illustrating how staging “trolley problem” scenarios (thought experiments on moral decision making – would you pull a lever of a trolley to save five human lives but kill another?) in a variety of media, from theater to virtual reality platforms to video games, gives new dimensions to classic philosophical conundrums. The simulation of a “trolley scenario” in different media contrasts a wider range of emotional states connected with different levels of physical and cognitive engagement. Transmedia ethical experiments “can enrich one another and supply varied yet complementary accounts of how sensuous and proprioceptive factors influence deliberation.”

Sarah Bey-Cheng thinks about ways of conducting performance criticism in an age of accessible (but still not widely accessible) digital recordings of live performances: “what it means to ‘see’ work in the context of telematic performance and digital media.” While embodied spectatorship to live events generates its particular range of affective involvement, recordings also stimulate a particular, affective response. New practices of digital documentation demand new approaches of affective criticism, “a mode of criticality that can acknowledge both the digital record and the generative event as complements of what is an always incomplete and evolving record.”

Records of two performances engaging with digital technology complement the critical articles on digital feelings. In an “Artist’s Journal,” Ryan Holsopple talks about the process of designing and performing dataPurge. Lastly, Theater includes the full script of Andrew Schneider’s YOUARENOWHERE, written down post-production and bearing textual marks of its creation in a digital fashion. Both shows were performed at PS122’s COIL Festival, New York in 2015.

The Editors’ Introduction to “Digital Feelings” is freely available to read here. The magazine can be ordered on Duke University Press’s website. 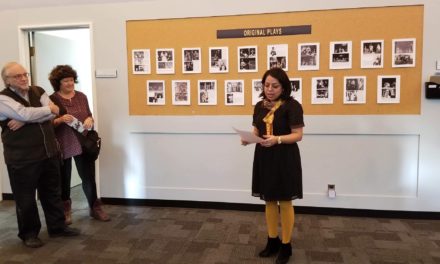