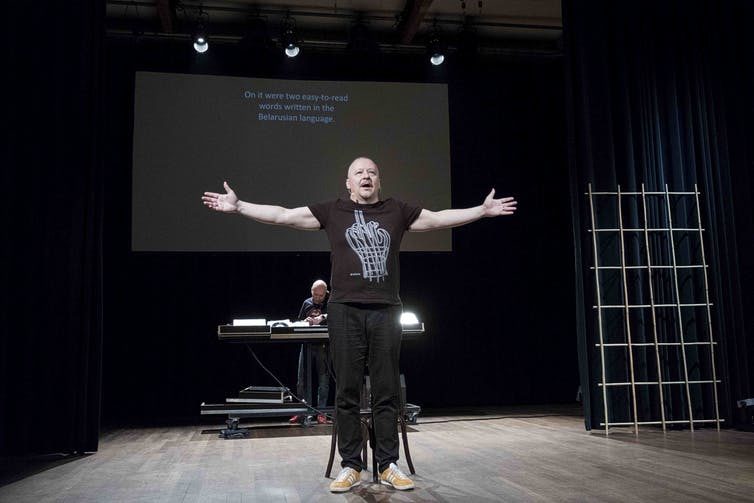 With two of their founding members in exile, it is little wonder that The Belarus Free theatre create provocative theatrical works that blend the grammar of political action with artistic form. Their production, Generation Jeans, first performed underground in Belarus in 2006, is no exception. It is a pared-down, humorous and intimate monologue exploring the human dimension of a political movement.

The show begins with a tale of adolescent life under the Soviet Union. Here, schoolyard trades in plastic shopping bags and blue jeans were acts of freedom for a youth-culture hell-bent on thumbing their noses at authority. The story is told by the company’s co-founder Nicolai Khalezin who retraces his steps in a heist-like narrative that almost verges on a “mumblecore” delivery. The monologue is accompanied by DJ Laurel who works the decks, cradling Khalezin’s words in a soundscape of electro-disco, funk, and nu-jazz.

We follow Khalezin from Minx to Vilnius, where he is a boot-legger in jeans and vinyl, through to his time as a political prisoner and now exiled Belarusian artist–a fate shared by an increasing number of artists who have critiqued the legitimacy of Alexander Lukashenko’s presidency. (International electoral observers concluded the 2006 elections that reinstalled Lukashenko to the presidency failed to meet democratic standards).

Curiously enough, Lukashenko’s name is never uttered during the 90-minute-long monologue. Instead, it hangs suspended as a kind of shadow over the compendium of names upon which Khalezin bestows the honorific of “jeans”–Jimi Hendrix, Mother Teresa, Charlie Chaplin, Mick Jagger, his friends, his lover, and children–as though “jeans” were a quality belonging to the rock n’ roll soul of a dissenter, a virtue, rather than a glib fashion item and commodity to be worn. Conversely, politicians are dubbed “suits”–an intolerable attire for a “freedom fighter,” he says with a touch of irony.

Khalezin struts the stage in blue jeans, mirrored glasses, and sneakers while describing in detail the cultural cachet attached to different styles of denim and vinyl circulating on the black market. He tells us that the most coveted vinyl was pressed in Britain or the US, and that Soviet issue jeans were easily detectable and rejected as inauthentic. Namely, the ink in Soviet issue jeans never faded and the fabric would not mold to the contours of the individual’s body as did the “real” items.

His tales of bootlegging take us to Lithuania where he would attempt to score highly sought-after Pink Floyd and Bonnie Tyler records, be interrogated by bug-eyed KGB “rats,” and narrowly escape by wending his way back through a sea of Soviet Bloc punters, wearing multiple pairs of out-lawed jeans beneath their regular attire. The playful irony of this section turns to more troubling scenes, and humor gives way to pathos. 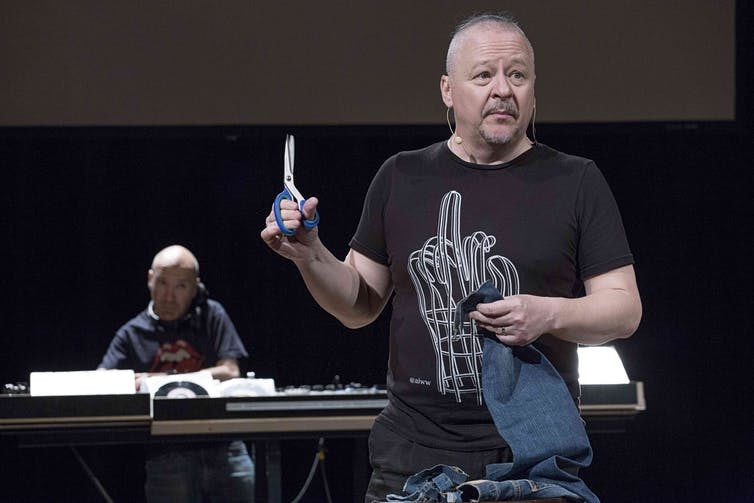 Changing out of his jeans into a fresh pair with a slightly different cut, Khalezin transports us to the barricades during the annual “Freedom Day” protests, which commemorate the anniversary of the Belarusian Peoples’ Republic (1918), but now double as opposition to Lukashenko’s authoritarian-style rule.

Khalezin repeats the chants of the protestors, encouraging the Melbourne audience to join in and to find synergy with the mood and meaning of protest: “I am free, I am free, I am free.” After several attempts at trying to rouse the theatre, Khalezin cheekily dismisses the feeble response with a wry throw-away line, “we’re in Melbourne after all!”

He transforms his demeanor by picking up a baton, rhythmically hitting it against his open palm to foreshadow the police brutality that was visited upon the bodies of protestors, who also chanted “we can’t live like this.” He goes on to talk about his transportation to a Belarusian detention center in an “autozak” where he awaits trial, spends sleepless nights, and has a surreal out-of-body experience triggered by a claustrophobic reaction to confinement. A virtual meadow of green grass opens before him, a seductive but illusory horizon upon which to pin the hope of his release.

The monologue built to a crescendo and then took a turn toward memorialization when Khalezin pinned a photograph of a young Jan Palach to the set. Just an “ordinary man,” he says, “a friend.” Jan Palach was a 20-year-old Czech student who had doused himself in petrol setting his body alight in Wenceslas Square in Prague (1969), to protest authoritarian developments following The Prague Spring. Khalezin couldn’t have known Palach personally but gives an account of what he was doing during Palach’s protest–eating eggs for breakfast, lovingly made by his mother.

It is as though The Belarus Free Theatre are attempting to weave together the threads of an inter-generational effort to mobilize civil society, showing how acts of protest and civil disobedience might enter the theatre, binding the audience to a political movement across geopolitical space and time.

What does Palach’s self-immolation as political protest in Czechoslovakia (1969) have to do with “freedom-loving” Australia today? If you listened closely enough you could almost hear the question ricocheting across the theatre’s auditorium–I’ll admit, I had even cozied up to it myself.

But Palach’s story, although different in many ways, reminded me of 23-year-old Iranian refugee Omid Masoumali, and 21-year-old Somali refugee Hodan Yasin, who both self-immolated on Nauru in 2016–the only act of self-determination possible under Australia’s secretive and repressive immigration and detention policies. Moments before Omid had self-immolated he reportedly said:

“This is how tired we are. This action will prove how exhausted we are. I cannot take it anymore”.

Aren’t there echoes of this sentiment in the protest chants Khalezin shared with us earlier–“we can’t live like this?”

And this is only the tip of the iceberg. Add to this Australia’s appalling treatment of First Nations people and the rise of populist right-wing sentiment buoyed by political scaremongering, and you begin to feel how the tacit silence and collective amnesia bores a destructive hole through Australia’s political imaginary. In other words, we may not have a Lukashenko, but is our democracy as generous and uncompromised as we currently think it is?

Generation Jeans gives the impression of being a highly transportable piece of theatre; at times the understated delivery invites you to imagine how you might be listening to Khalezin’s story at a party or sitting in a friend’s kitchen at dinner. The transportability of this intimate piece of storytelling not only refers to its ability to be staged in different venues but in different geopolitical locations.

Its core message seems to be that the theatre can play a crucial role in the promotion of civil society anywhere. It can help sustain an image of political action nourished on the human bonds of friendship–bonds that transcend hate and sovereign borders.

Generation Jeans is being staged at the Malthouse until August 18.

This article was originally published on The Conversation on August 13, 2018, and has been reposted with permission. Read the original article. 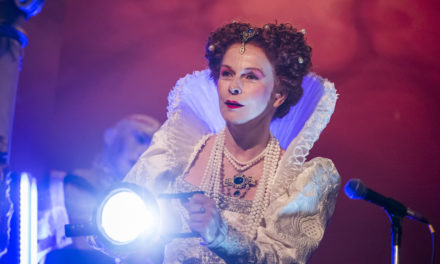 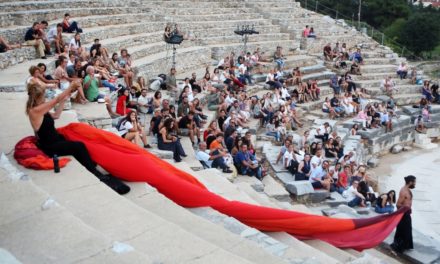 A Greek Tragedy For Two Actors