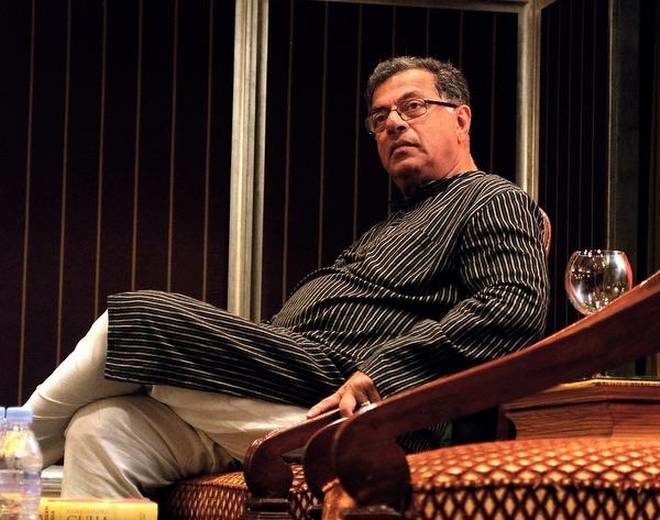 Girish Karnad’s new play Rakshasa Tangadi puts the spotlight on Vijayanagar empire. More than his earlier historical plays, this one charters the course of history closely

History travels in multiple avatars, more today than ever before. Historical figures are demonized, lionized, and eulogized–each unto his own. When Girish Karnad–among India’s most eminent playwrights–releases his latest historical play, he almost seems to question this trend of “making” and “breaking” history that is neither truthful nor is bound by human implications.

His new play Rakshasa Tangadi, set in the 16th century Vijayanagar empire, attempts to humanize the tyrant Aliya Ramaraya, the army general who became the son-in-law of the king Krishnadevaraya. Nearly a hundred years prior to Girish Karnad, the great Kannada writer Masti Venkatesh Iyengar writes the play Talikote (1919), based on the same historical period and character; they, however, are a world apart. While Masti’s attempts are to reverse the Oriental views through his creative take on the plot, Girish Karnad remains firmly in the historical course of events, making his entire narrative a subtle and nuanced reading into the minds of men and matter.

Excerpts of a conversation with the writer

The title of the play Rakshasa Tangadi is interesting. The hybrid nature of that word has resonances which elevate it from the geographical.

Let me tell you this. In Kannada, the play as you know is called Rakshasa Tangadi, and in English, I have called it Crossing Over To Talikote. I felt that English readers will not be able to get the Kannada title right, and also since the river plays such an important role in this piece of history, I gave it a different title. But yes, as you say, it becomes more than the location of the battle in Kannada and in English that idea doesn’t come through. Most historical documents call the place Rakkasagi Tangadagi, but in Ramarayana Bakhairu it is mentioned as Rakshasa Tangadi, and that caught my interest.

How do you place Rakshasa Tangadi with respect to your other historicals?

I have always been obsessed with history. Both my father and I were voracious readers of history. Even as a child, I read world history just for the pleasure of it. 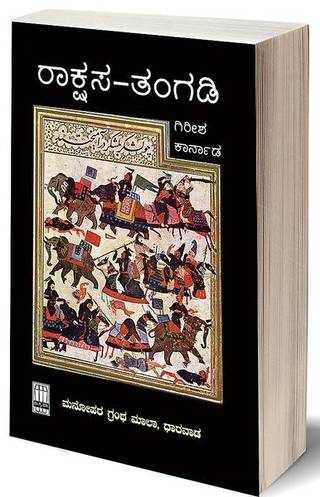 My play Tughlaq was prompted by completely different circumstances. In the work Nadedu Banda Daari, the eminent Kannada critic Kirthinath Kurtukoti says we hardly have historical plays. I was gripped by that observation. When the Mandal agitation took place, we were yet again struck by issues of caste and class. This was exactly what had triggered the 11th century movement of the vachanakaras. A.K. Ramanujan’s Speaking Of Siva, a translation of the vachanas was also a work that influenced me. He made me aware of many things. For instance, you can get rid of caste and say I’m not a Brahmin and you are not a Holeya, but can you shed language? It is with these questions that I wrote Taledanda.

In the 50th year of Indian independence, BBC asked me to write a historical play, and I immediately thought of Tipu Sultan. He was next door, the last price to fight the British etc. Between 11th and 18th centuries–that is between the plays Taledanda and Tipu’s Dreams--there was a gap. That is where this episode of Vijayanagar empire came in.

The narrative belongs to the past, you also remain very close to the historical happenings, however you turn it into a contemporary comment.

For this play, I relied a lot on historical data. I have made very few changes to the original story. There are several unanswered questions in history. For instance, if today a Muslim boy were to marry a Hindu girl we would be worried about its social implications. Back then in the 11th century, why didn’t Basavanna or Bijjala anticipate this when a Brahmin girl married an untouchable boy? Why did they sit quietly? How did they let it happen? I asked the former minister and playwright M.P. Prakash this question. He told me that Basavanna had said that he was willing to make any sacrifice, even at the cost of the collapse of the whole movement.

Did Basavanna really say so?

It is nonsensical, why would he build the movement if he would allow it to collapse? I’m sure these are words that people after him put in his mouth. See, you train disciples for a revolution. They get trained and take over. It is a problem, and unstoppable. This is what attracted me when I wrote Taledanda. You see disaster, but it has gone beyond your control. All this emerges when you work with data. The problem with us is we do not question. Fortunately, I love history and I try to think like a contemporary. 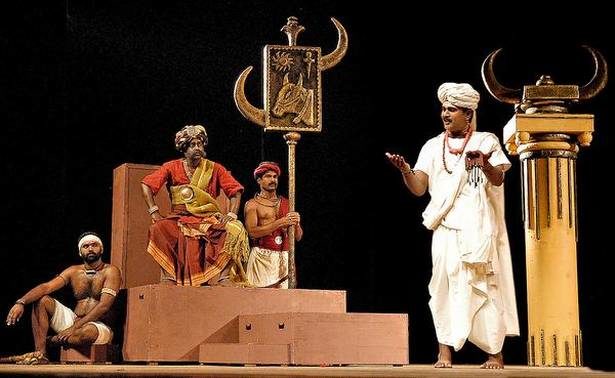 Many questions came to me as I was reading up. With regards to Rakshasa Tangadi, if the standard version of history is correct, which is the sultans attacking Vijayanagar, they should have travelled south. But what has actually happened is that the Vijayanagar army enters Bijapur. I kept thinking it was odd, but had not given it much thought. Historian Richard Eaton argues this brilliantly in his work. He makes geography central to his analysis and points out that Ramaraya was involved with fights with Golconda, Bijapur, Ahmednagar etc, and in all these battles Kalyana was involved. “Why was he involved with Kalyana?” asks Eaton. Ramaraya was obsessed with the Chalukyas and you can even find a Chalukya step well in Hampi. Once these things came to the fore, all kinds of things happened within me. It opened a hornet’s nest.

Satyabhama, the daughter of Krishnadevaraya, is married to this man of a lower caste and class who claims to be Chalukya. He is denied kingship, and on his part, he rejects her and consults only his mother even before leaving for a battle. In fact, this scene is also there in Ramarayana Bakhairu. There is complex politics, difficult relationships, caste and more, yet he had to run the empire. Also, if you notice, all the young men are on the other side, and there are only old people on Ramaraya’s side. It is full of contemporary possibilities.

Most of the works that go into your research are by Western scholars. Your effort has always been to reject colonial reading of history and develop your own theory of history. How did this process take place?

A great advantage of a Muslim subject is that there are always contemporary historians writing about it. For Tughlaq, there was the historian Barani who wrote volumes on him. Similarly, with the Sultanate of Bijapur there was historian the Mir Rafi-uddin Ibrahim-i Shirazi’s account, who witnessed the battle. Most Indian scholars come with their ideological biases. Thankfully for me, there was Krishna Kolar Kulkarni’s work.

I love sifting through these many interpretations. I think about it, and in fact, during this stage you have to work like a historian. I did it a lot more in the case of Rakshasa Tangadi than I did for my earlier historical plays. Many scenes have an original, factual reference. Both Robert Sewell (A Forgotten Empire Vijayanagar: A Contribution To The History Of India) and Richard Eaton (A Social History Of The Deccan) are superb historians. Sewell wrote in the 1900s and you cannot blame him for having colonial views. The material is excellent, but he immediately sees it as Muslims vs Hindus. Same thing has been followed by Indian historians. What Eaton does is he goes back to these episodes and points out the problems. Even in Ramaji Tirumala Harikare’s work–though a lot of it is genuine–he writes that Ramaraya goes to Ali Adil Shah and pleads not to be killed by the other Muslim kings. “You kill me,” he apparently says. That sounds so unconvincing. Ultimately, I am not writing history, the truth that one is trying to capture is an emotional one.

For instance, Eaton says in passing that the influence of the Begums on the Sultans is very powerful. He does not record any episodes though. But I began to hear the constant kichikichi in the zenana, in the kitchen etc. These men go out to war, but ultimately they have to listen to their wives. I thought I should listen to what these women were saying. 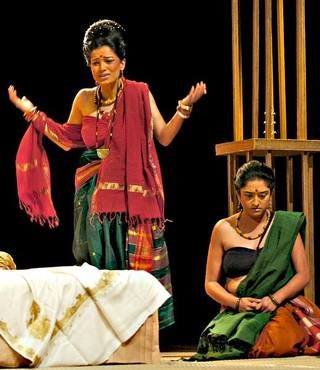 The kind of agency you give Begum is rather forceful.

Begum speaks about her daughters just the way Satyabhama is treated by her father Krishnadevaraya. It is actually the Nizamshah who hesitates to use them that way. Finally, he does implement her strategy. Satyabhama is the real victim of that society.

So it even surpasses gender.

Absolutely. In that sense, the Muslims and Hindus are no different from each other. They treated their women exactly in the same way.

We read Shakespeare and try to write a historical play like him. But we forget that he wrote about his society. Well, even there we have a Lady Macbeth. The problem with us is we have not read our history properly.

That gesture of Nizamshah trying to scrub his hands reminds one of Macbeth.

Ah, yes. The whole play should have been in Telugu. Even Muslims spoke in Telugu. The line in that scene where Ramaraya tells his brother that he would have beheaded Nizamshah had he not been his guest, is the only line in Kannada in the historical source.

You are interested in history, not the way a historian is, but as a creative writer. How do you “read” history?

I read it like a story. It is a narrative, not a string of facts. I write because I am excited by it. Suddenly you get these little nuggets in human behaviour. When you understand, they light up. They do put demands. For instance, the scene where the four sultans sit together. I have to make all four of them different from each other to make the scene interesting. It is a technical need, something that concerns the craft, and not a factual need. What I did was to invoke in my mind Seven Samurai of Kurosawa. So someone has to be good, someone quiet, and someone who cracks a joke. 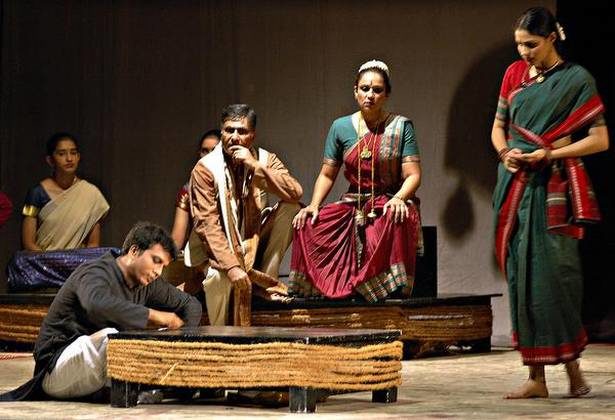 Once Peter Brook held a workshop which I attended. He discussed a scene in which Shakuntala plucks a mango. On stage, it has to be made interesting–you must make the audience feel that she may not get it, she may not be able to reach etc. How to build the possibilities of a scene is what makes it fascinating. When you work with playwrights like Chekov, Tenesse Williams…you learn these techniques. Most Indian playwrights think writing a play is all about writing dialogues.

You wanted to be a poet, though you didn’t become one. As a playwright, you embody the poetic in your telling of history. It probably comes from the belief that theatre is an artistic statement and is located in the literary discourse. For instance, Basava-Bijjala, Tughlaq-Barani and in this case Ramaraya-Adil Shah. Ramaraya in a veena player and Adil Shah speaks of Sufi.

I think arts humanize characters. I don’t want Ramaraya to be the beast that history makes him out to be. He was actually a trained musician, a disciple of a vainika. He is not just an animal. Who knows, as a young person, he may have been very charming.

This article first appeared in The Hindu on September 20, 2018, and has been reposted with permission. 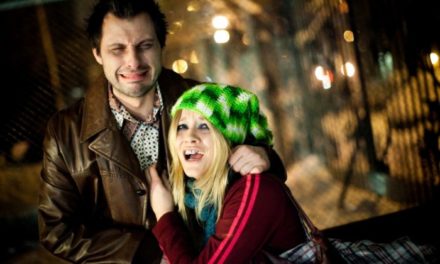 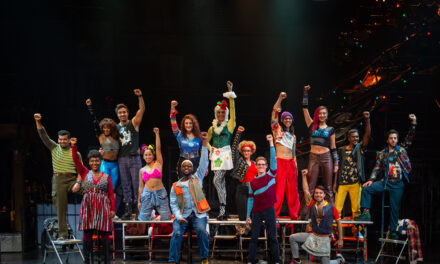