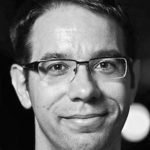 Tamás Jászay (39), theatre critic, editor, university lecturer, curator. Since 2003 he's been working as a freelance theatre critic: in the last 15 years, he published appr. 1000 articles (mostly reviews and interviews) in more than 20 magazines all around the world, all together in ten languages. Since 2008 he is co-editor of the well-renowned critical portal www.revizoronline.com. Between 2009 and 2015 he was the co-president of the Hungarian Theatre Critics' Association. In 2013, he defended his PhD thesis on the history of Krétakör Theatre, now he is preparing the publication of its longer version. In the last years, he started to work as a curator as well: Hungarian Showcase (Budapest, 2013), Szene Ungarn (Vienna, 2014), THEALTER Festival (since Szeged, 2014), dunaPart3 (Budapest, 2015), dunaPart4 (Budapest, 2017). Between 2009 and 2013 he was teaching theatre theory to future actors at Kaposvár University. Since February 2015 he's been teaching at Szeged University as a guest lecturer, from September 2017 as an assistant lecturer.

When someone speaks about US and Hungarian theatrical relationships, you cannot miss his name....