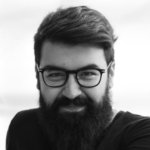 Gabriel Vivas-Martínez is an actor, theatre-maker and researcher based in London. He holds a BA (Hons) with distinction in Drama from the Superior Dramatic Art School of Castilla & León (Spain) and an MA in Artistic, Literary and Cultural Studies from the Autonomous University of Madrid. He has worked as a theatre facilitator and director in countries such as The Netherlands, Italy, Hungary, Romania, South Africa, and the UK. In educational programs of the European Commission, he works as a freelancer trainer of Performing Arts techniques for youth workers and educators across Europe. He recently finished his MA in Applied Theatre (Drama for the Community and Drama Education) at The Royal Central School of Speech and Drama, University of London and is currently conducting his PhD research about masculinity and socially engaged theatre-making in the same institution.