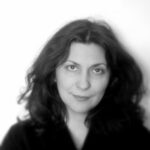 Angeliki Spiropoulou is Assistant Professor at the Theatre Studies Department, School of Arts of the University of the Peloponnese, Greece and a Visiting Research Fellow at the School of Advanced Study- University of London. She specializes in Critical Theory and European Literature and Drama, especially Modernism. Her recent publications include: Virginia Woolf, Modernity and History: Constellations with Walter Benjamin (Palgrave-Macmillan 2010); Walter Benjamin: Images and Myths of Modernity (Athens 2008); and contributions to journals and volumes, such as 1922: History, Culture, Politics (CUP), The Routledge Encyclopedia of Modernism; The Sage Encyclopedia of Theory; and Dictionary of Modernism (EUP). She is on the editorial board of Theatre Polis; a member of the Executive Committee of the European Network of Comparative Literary Studies and a member of the Hellenic Centre of the International Theatre Institute. She also contributes to the Greek daily and Sunday Press and is interested in interdisciplinary projects that bring together theatre, literature and the arts, and academic with other social, art and cultural institutions.

OUT SCORE: Χω/ορικές Σημειογραφίες I is a research program that generates encounters between...