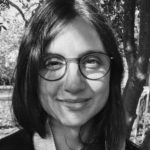 Amanda Fromell is a writer with a passion for making work that resonates with current political and social debate. Her plays have been performed and recorded at theatres in the UK and Sweden, such as Curve Theatre, Teaterstudio Lederman and Rosenlundsteatern. As a dramaturg, her work spans verbatim theatre (BeFrank Theatre Company), site-specific community theatre (Chorus Theatre) and developing new writing (Birmingham Rep, Manchester Royal Exchange and Liverpool Everyman, and Playhouse Theatre). She works regularly as a script evaluator for the Bruntwood Prize for Playwriting and previously served as Vice President for the Dramaturgs’ Network UK. She is currently undertaking an AHRC-funded Practice-led PhD that investigates and challenges the power of algorithms in contemporary society.

In 2011, a woman stood outside an abortion clinic in Manhattan and asked...