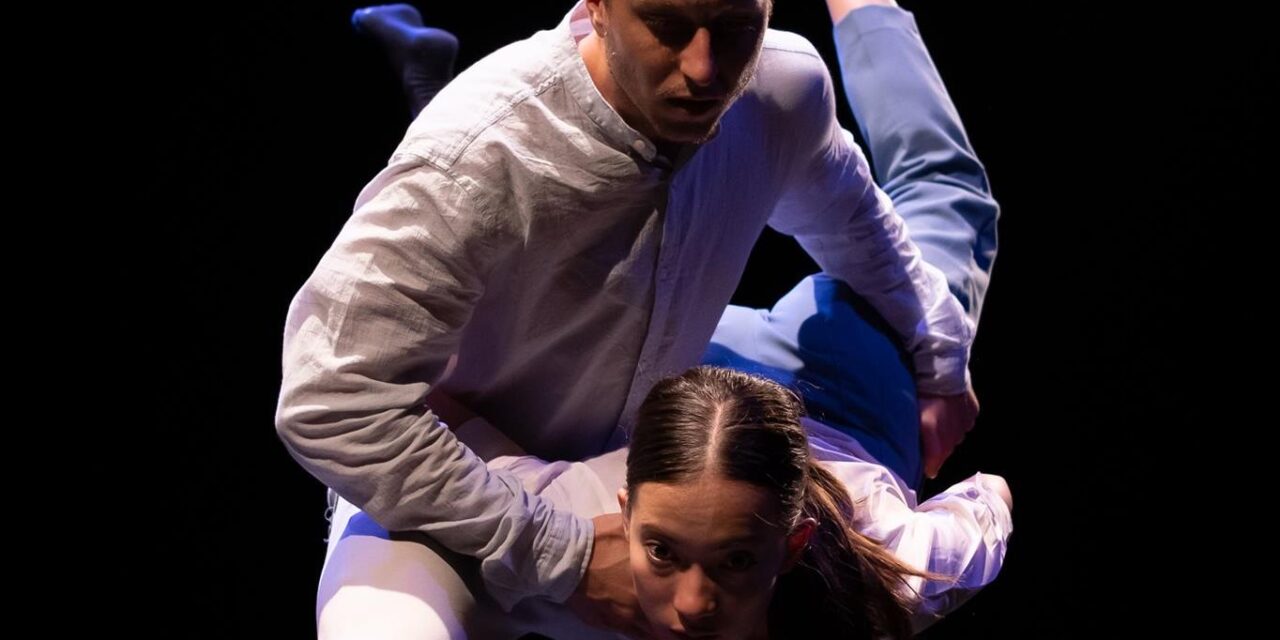 Tanz mit dem Tiger (in English:  Dance with the Tiger) is a forty-minute hybrid dance performance directed by choreographer and artistic director Pablo Sansalvador. It was presented to a live audience at Southern Germany’s major cultural centre – Roxy Ulm, from 3 to 12 September 2021 and was live-streamed as a 360° video on multiple online platforms.

The on-site performance took place in a black-box studio without any seats. At the centre, a purple fluorescent spotlight shone directly at a pixelated image of a tiger’s head. Several white marking tapes stretched across the marquee floor, forming elongated diamond shapes encompassing the tiger image. As the sound of birds singing and stream flowing faded up, ten audience members entered the space, each holding an iPad in their hands. With the help of a customised augmented reality (AR) app, the audiences saw four virtual avatars appearing on their screens and performing gripping choreographies set against composer Max Levy’s tapestry of ethereal music score and soundscapes of a forest. With a loud burst of thunder, a warm wash light drew everyone’s attention to a stage on the side of the studio. A male performer twisted his body and began exploring the narrow stage. Suddenly, the opposite end of the studio was illuminated, revealing the other female performer. The ambient natural sound morphed into a futuristic synthesised soundtrack layered in fragmented natural, industrial, and digital sounds. Responding to the sonic environment, the performers transitioned from purely organic movement to a mixture of street dance forms: locking, popping, and body-ticking. The live performers interacted with the audience while simultaneously forming a dynamic relationship with the “digital dancers”. The soundscape continued to be the thematic thread of the performance, oscillating between evocative music score to high-octane electro beats. The dance sequence came to an epic end as the dancers froze in poses. The familiar natural soundscape returned with another sound of distant thunder, and the ultraviolet spotlight surrounding the dancers disappeared. The dancers curiously looked around as if they just woke up from slumber or escaped from the Matrix. As they slowly exited the space, the stage light dimmed, leaving the audience to linger and ponder on this captivating experience. 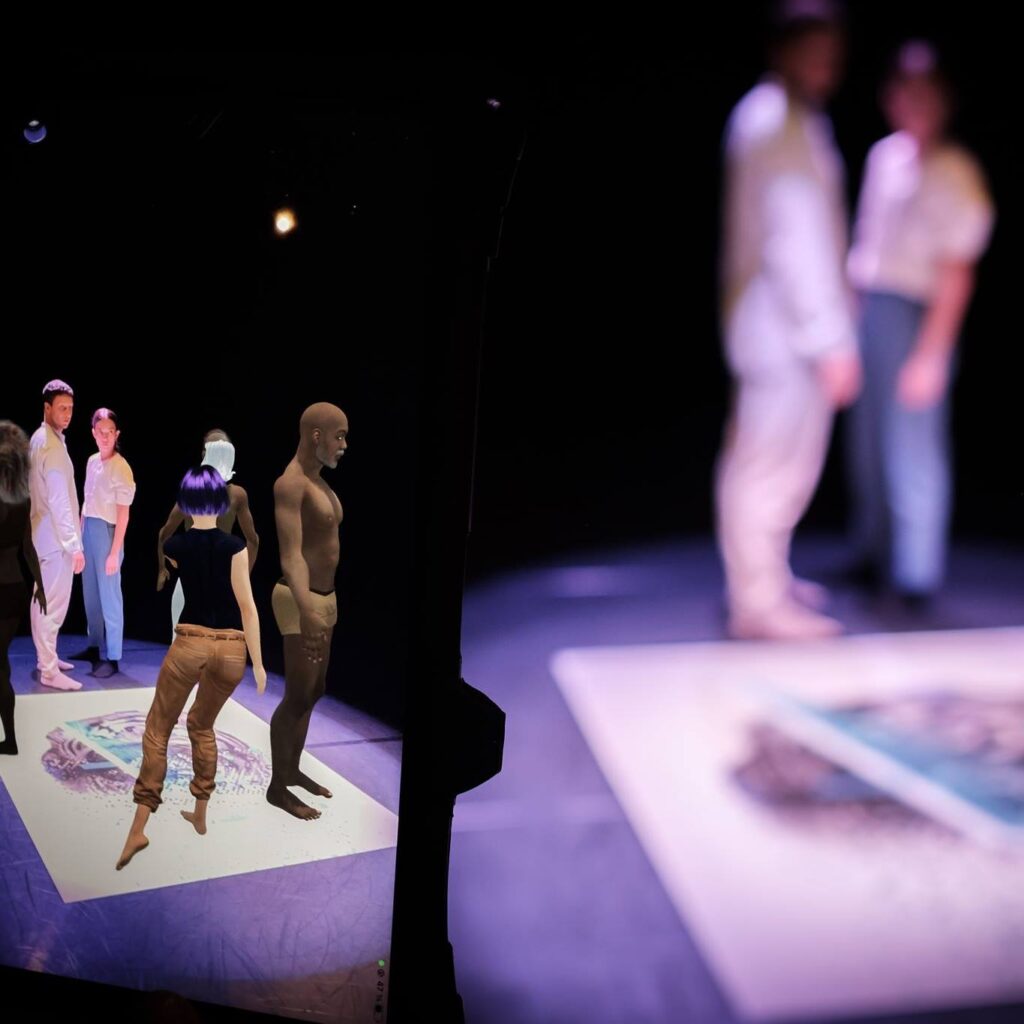 The title originates from a quote by Germany’s leading virologist Dr Christian Drosten, who described the country’s pandemic situation as “dancing with a tiger” and emphasised the urgency to find out “where you can let the animal loose without it attacking you right away.” Emerging from the context of a global pandemic and a sudden boom in digital events, this performance answers the need for radical changes in how performing arts are made and experienced. I also think the symbolic “tiger” alludes to the power of digital technologies, which is disrupting and revolutionising the art form at an unprecedented speed. Therefore, the “dance” becomes a manifestation of the artists’ exploration of the symbiotic relationship between the digital and the embodied, unleashing methodological, aesthetic, and experiential potentials of both modalities.

In the development phase, four “distant digital dancemakers” – Claudia Mwabasili and Roges Doglas from Brazil, Zelia Tan from Hong Kong and Kelsey Paschich from the United States – worked remotely with the director to conduct movement research and development. Their choreographies were recorded by cutting-edge motion-capture (MoCap) technology and transformed into AR avatars by 3D digital animator Guido Stuch. Such seamless virtual team collaboration was made possible thanks to Rokoko Smartsuit Pro, a portable full bodysuit that allows real-time movement tracking, data visualisation, and modification. This project shows that while artists and the performing arts sectors are among the hardest hit by the pandemic, many invent new international collaboration models using digital technologies. I firmly believe that this type of long-distance co-creation will thrive in a post-COVID world for two reasons: first, it will help artistic projects to offset their carbon footprint by minimising artists’ air travel; second, it will empower artists from diverse geographical locations to access and participate equitably in international cultural production. As a performing arts producer myself, I am thrilled to see how this emerging field of digitally enabled live performance will transform the art form while serving as a force for positive social change to make our industry more sustainable and inclusive. 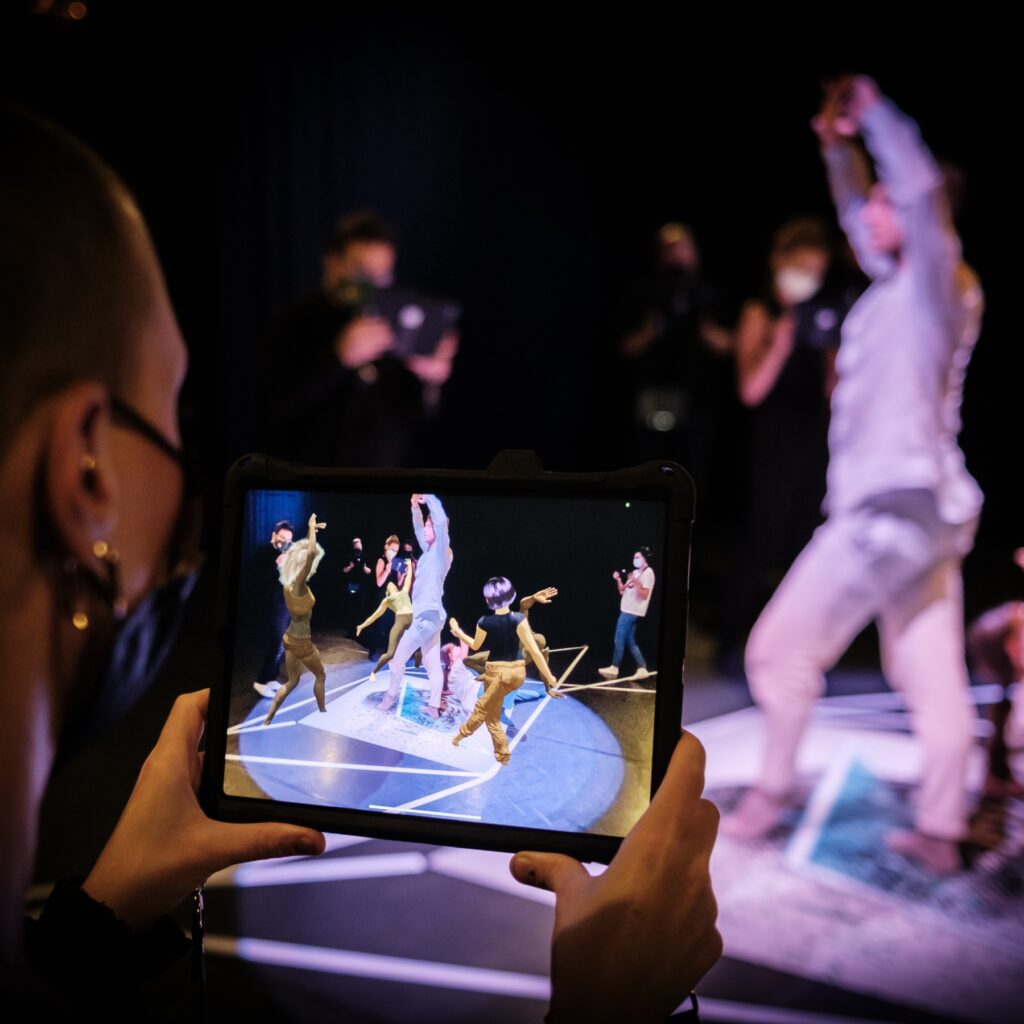 The transformative power of digital technologies also foregrounded the dissolving boundary between performers and audiences. Immersed in the dance, the audiences were free to move in the space and alter their viewpoints between the live event and the virtual spectacle. The digital dancemaker Zelia Tan explained that an algorithm would constantly calculate the distance between the AR avatar and the audience and update the degree of details displayed on the iPad. This playful experience is akin to the mobile game Pokémon Go, which triggers strong social, affective, and visceral responses in participants through physical engagement, “real-time interactivity”, and “responsiveness (Cleland, 2010).” The online audience could alter the sound and lighting state by pressing the purposefully designed buttons on the live stream webpage. These features exemplify a shift in power dynamics. The audiences are no longer passive spectators but active participants who can assert agency to shape their own experience and influence the work. These interactions are based on embodied human relations, participation, and social connectivity, imbuing the performance with a kind of “relational aesthetics” and “auratic presence” (Bourriaud, 2006, as cited in Paul, 2016; Cleland, 2010).

Through its use of software-based MoCap technology, AR app, and interactive live-stream, Tanz mit dem Tiger blurs the distinction between embodied ephemeral live performance and digital-born art. It is ontologically distinct from the more commonly seen projection-mapped dance. The latter merely employs digital technologies as a production tool, whereas the former is “created, stored, and distributed via digital technologies” and utilizes many of the medium’s intrinsic features, including computational, process-oriented, time-based, collaborative; participatory, modular, and generative (Paul, 2016, p.14).

As an artistic experiment, Tanz mit dem Tiger succeeded in blending physical and digital platforms to create a hybrid public sphere, where the local and virtual communities can gather and share a sense of belonging and connection. Echoing the belief that “digital art is no longer confined to ‘cyberspace’ (Cornell & Droitcour, 2013), this performance proves that “affective atmospheres” and “embodied re-thinking of materiality” can be elicited in private and public realms at once by the curation and assemblage of digitally-mediated encounters (Freeman & Sheller, 2015).  Like any kind of experiment, there are still many technological challenges to be resolved, especially for the live stream. While 360° live video allowed online audiences to switch viewpoints by moving the toggle on the screen, the fidelity and viewing range were limited. The biggest flaw was that online audiences could not see the AR choreographies, making their virtual experience incomplete. I speculate that a potential solution might arise from the recent proliferation of metaverse – a networked social environment where people can synchronously move between VR, AR, and 2D devices using avatars (Broby, 2021). It is reasonable to believe when devices like VR headsets and AR glasses become as ubiquitous as smartphones, performances like Tanz mit dem Tiger would be able to deliver a more coherent, interactive, and immersive experience for those online.

Despite these technical flaws, Tanz mit dem Tiger is an exciting venture into digital hybrid dance, demonstrating the strength of the artists who use their creativity to overcome extraordinary challenges. By employing digital technologies as a tool, a medium, and a site, they invent a new space for imagination, empathy, and solidarity. The production – from conception to development and its eventual hybrid presentation – broke a multitude of boundaries and triumphantly realised the director’s creative vision: “to embrace virtuality and reality.” 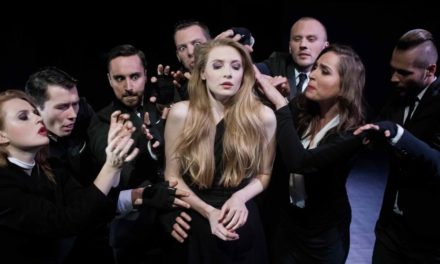