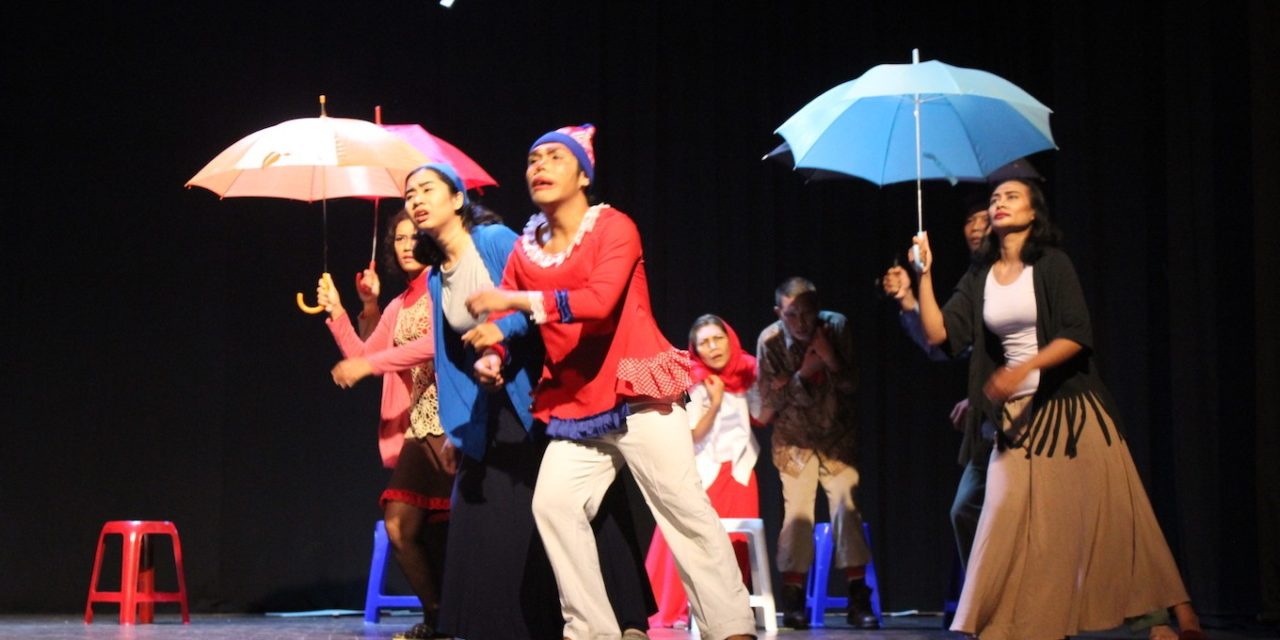 This year marked Indonesia’s debut at SCOT Summer Season in Japan, as director Iswadi Pratama leads his theatre community Teater Satu to the international festival in Toga. But did the festival impress as much as its illustrious venue did?

It was Indonesia’s first time attending the Suzuki Company of Toga (SCOT) Summer Season, Japan’s oldest international theatre festival that has been around for the past four decades. Theatre director Iswadi Pratama was selected by the Japan Foundation to take his group Teater Satu to the festival’s 41st anniversary. I tagged along.

The Lampung-based theatre community departed from Jakarta on August 27, hopping on a seven-hour flight to land in Haneda Airport, Tokyo the day after. From there, they took a domestic flight to Toyama Prefecture before spending another two hours on a bus to finally arrive in Toga.

The crew was immediately transported to a scenic landscape where the festival was held. Toga is a mountainous region filled with beauty. The place, which locals refer to as ‘the theatre’s mecca’, features a number of arts facilities, including seven stages (both outdoor and indoor) and one residence hall where participants stay. Everything is situated in a rural forest scene, with mountain peaks on the horizon. 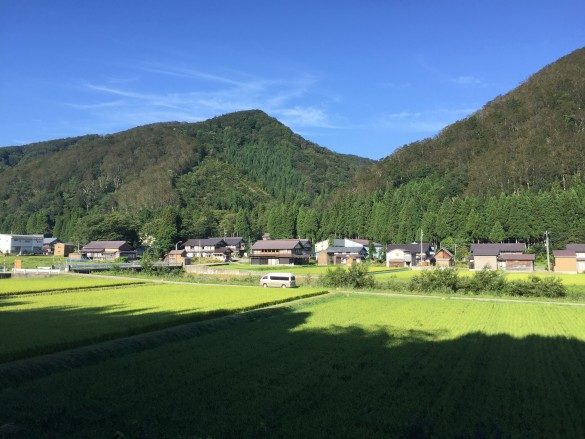 The view at Toga

Before holding the SCOT Summer Season in Toga, theatre company SCOT spent many years operating in Tokyo where its founder, director, and organizer Tadashi Suzuki, oversaw multiple productions. After visiting the village for the first time in 1976, Suzuki was so taken aback by its beauty that he was determined to transform the space into his company’s home and make it one of Asia’s leading arts centres. Later that year, the company moved to Toga where the SCOT Summer Season has taken place ever since.

My first impression of the SCOT Summer Season was that sure enough this was the kind of festival that would attract a massive influx of tourists who are more drawn to the serenity of the venue than the shows themselves. After all, Japan is no stranger to places where visitors find themselves transfixed by the natural attractions. 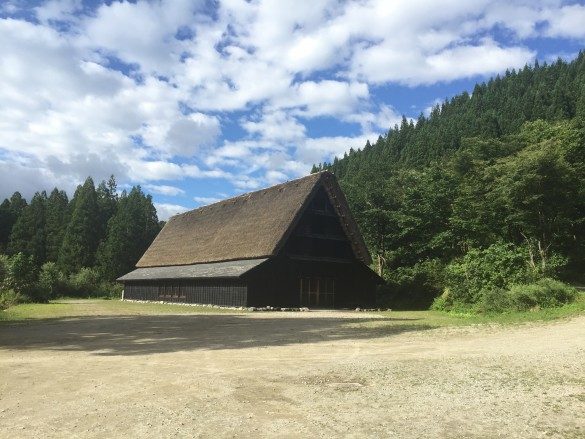 One of the theatres at Toga Art Park

Despite Toga’s uncompromisingly beautiful features, I was wrong to say that theatergoers journeyed all the way here just to hang out at the venue. The real draw behind the festival turned out to be maestro Suzuki himself, who is best known for pioneering his own method of actor training. Essentially, Suzuki is seen as a bona fide Japanese theatre god, who has traveled the world teaching his method at universities like The Juilliard School in New York and the Moscow Art Theatre in Russia.

With this in mind, most theatergoers have their eyes set on Suzuki’s productions showcased in the two-week event, which ran from August 26 to September 4. They came for the highly-anticipated Asian Theatre Directors’ Festival, an annual programme that was joined by elite groups from Taiwan, Japan, Korea, China, and first-timer Indonesia.

One interesting part of the festival is when a select number of directors from different countries are given the task to present the same play. This time, they were challenged to showcase Eugene Ionesco’s 1952 classic absurdist piece The Chairs.

The tragic farce sees an elderly couple making conversations with a series of invisible guests while expecting the arrival of an orator, who is to deliver the old man’s important message. The play, in essence, means to criticize the meaninglessness of the human condition and failure to communicate. 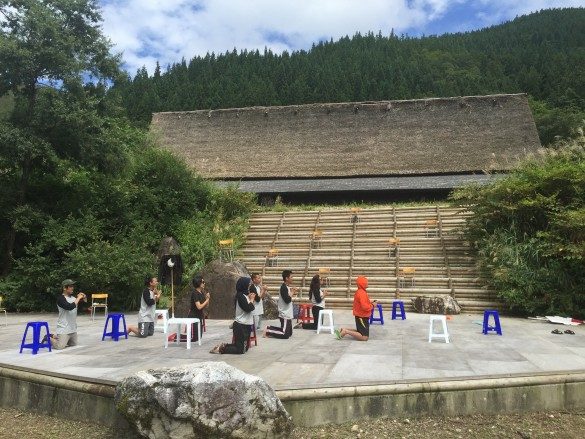 Teater Satu rehearsing for The Chairs at the Rock Theatre

Personally, I found the script to be amusing yet thought-provoking. I also wondered how the directors would tackle the real challenge of presenting this play in their own native languages to an audience made up primarily of non-native English speakers. Not easy.

Most of the directors relied on physical comedy and some minor alterations in the plot and characters to get around the language issue. Regardless, most productions remained faithful to the original by relying entirely on two performers, including Taiwan’s Hsu Po-Ang (Toga Sanbo Theatre), China’s Ni Guangjin (Toga Sanbo Theatre) and Korea’s Kim Jeong Geun (Lift Theatre). The other two, Japan’s Watanabe Akifumi (Lift Theatre) and Indonesia’s Iswadi Pratama (Rock Theatre), alternatively used more actors in their plays.

Some of their attempts to show a different side of playing Ionesco’s narrative – including Jeong Geun’s decision to have his play set on a campsite; and Akifumi’s obsession with cotton balls that virtually engulfed the entire play – had yet to capture the true meaning of absurdism.

Just because an absurdist drama “shows the world as an incomprehensible place” according to Martin Esslin – who introduced The Theatre of The Absurd back in 1961 – that does not mean that it should be inherently pointless.

So I was naturally surprised to see Teater Satu emerge as one that did justice to the absurdist tradition, while also bringing something new to the table. No, I am not just saying this because I’m Indonesian. Pratama did restore the play’s ability to problematize the human existence while maintaining its relevance within the context of contemporary society (yup, digest that theatre lingo!).

Pratama bravely divided the play into five segments, each played by two actors, and one for the ending. All four pairs kill each other in the end, right before the orator walks in to find bodies lying on the floor along with empty chairs. A similar ending to Ionesco’s classic version, except Pratama had the orator – played by a young actress – handing out a rose to the audience as a sign of hope to wrap up the entire play. 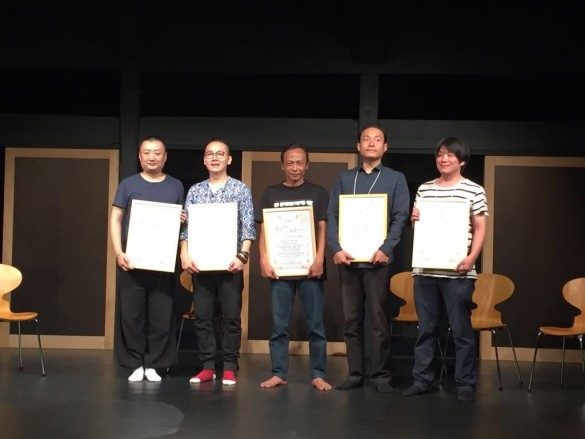 Iswadi Pratama (centre) and other directors at the closing ceremony

The Asian Theatre Directors’ Festival closed on September 2, with all the directors receiving certificates and a reward of ¥500,000 (US$4,852). Speaking to Indonesia Expat, Pratama revealed that throughout the experience, he was pleased with the invaluable amount of respect for theatre shown by people in Japan.

The experience also motivated him to become a better director. “Now I feel that I should start formulating my own work so that one day [my skills and knowledge] could be properly disseminated,” he says.

This year’s SCOT Summer Season indeed projected a celebration for theatre. But sadly I kept yearning for that ‘festival spirit,’ where there is an actual crowd and active discussions for participants to get involved in. Instead, we just attended one theatre show at a time, and headed back to the residence for lunch, dinner or resting. That said, Toga’s undeniable charm will always be there to amaze.

This article was originally published on http://indonesiaexpat.biz. Reposted with permission. Read the original article.