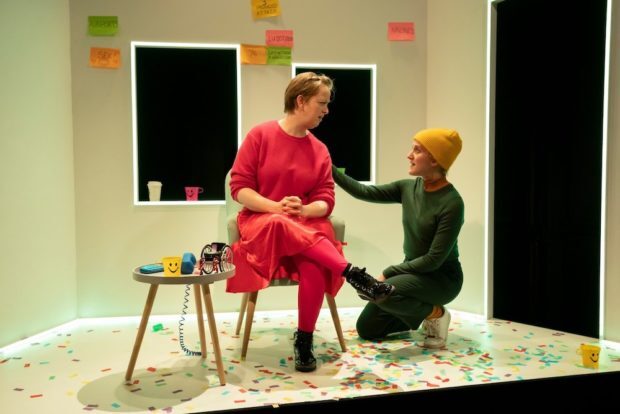 During the current pandemic, stories about isolation have a particular resonance. Feelings of claustrophobia, loneliness, and frustration slide off the stage and echo in our subconscious — yes, this is us alright. One of the most prescient and evocative is Athena Stevens’s Scrounger, an impassioned autobiographical account of how the crass inefficiency of an airline results in a wheelchair user being stuck at home for weeks on end. Written during her residency at the Finborough fringe venue, and staged early this year, it is now streamed as a film that beautifully conveys both its modernistic aesthetic and its emotional and political charge.

It begins with a moment that deliberately provokes the audience. Stevens, who narrates her own story from center stage, has a disability — athetoid cerebral palsy — and she challenges everyone in the room by calling us out as smug liberal Guardian readers who are patronizing a “freak show”. Then, as the piece’s other actor, Leigh Quinn, arrives (in the guise of a latecomer), the meta-theatrical nature of the story becomes instantly apparent: Quinn plays all of the other characters, and Stevens both bears witness to her own experiences and gives us a running commentary on various issues: urban gentrification (she lives in Elephant and Castle), disability shaming and the difference between EU law and our own.

The story is simple: the Scrounger, Stevens’s ironic alter ego, is due to fly from London’s City airport to Glasgow in 2015. As a wheelchair user, she has phoned ahead to make sure that the airline can carry her custom-built electric wheelchair, which is more sophisticated than an ordinary one. The airline takes note, but, on the day that Scrounger arrives, they mess up badly. I mean, really badly. Unbe-fucking-lievably badly. She is humiliated by being forced off the plane, which is delayed because of her, and her wheelchair is so badly damaged that it can’t function anymore. The rest of the play concerns her attempts to get compensation and a new wheelchair — without it, she is effectively trapped at home and cannot go out.

During her enforced lockdown, Scrounger and her well-meaning and optimistic boyfriend campaign to get a replacement wheelchair, which costs £25,000. She tries social media, writing dozens of tweets, and even gets help from Stephen Fry. She brings a court case. She appeals to the EU. She demands a revolution in the treatment of people with disabilities. As Scrounger tries to get justice, the sheer frustration of her situation is well conveyed by the repeated platitudes uttered by British Airways staff and the mercilessly good cheer of their tortuous customer service. At the same time, she challenges her audience not just to feel sympathy, but maybe to actually do something to help people with disabilities. In the end, the distinct feeling of visceral discomfort is surely proof that her intention has been realized.

Some of the best moments are when Stevens emphasizes the difference between her role as a storyteller, contrasting the grim reality of experience — dark nights, hours of depression, and wasted days — with the exigencies of entertainment. When you tell a story on stage, or on film, you have to think of the story arc, and that does not necessarily give an accurate impression of reality. And reality is sometimes frankly surreal: one episode is about a film crew arriving at 4 AM to film Scrounger for a breakfast television show. Um, a tough ask. As her boyfriend complains, “Can’t the revolution not wait until 8.30?” Stevens is disarmingly frank about the strains that her campaign puts on their relationship, and on that of some of her friends.

The 100-minute show is not only written with acute meta-theatrical wit, featuring an abundance of dry asides, but is also staged with a bright, almost cartoon-like style by Lily McLeish and designer Anna Reid, helped by great sound and lighting from Julian Starr and Anthony Doran. What you remember are the rich hues of each chapter in the story, the flashing lights and confetti, and the playful props, such as the tiny wheelchair and the retro phone. The bright colors of the performance underline the surrealism of Scrounger’s quest for justice, and Stevens, the first actor in a wheelchair nominated for an Offie, performs her story brilliantly. She gets great support from Quinn, who gives all the other characters distinct personalities. Filmed on 21 January 2020, this is an aptly hard watch, but, given that Stevens is a spokesperson for the UK’s Women’s Equality Party, it is effective and clear in its politics and punchy in its delivery. Hard, but true.

Scrounger is on Finborough Theatre’s YouTube channel on 31 August.

This article appeared on Sierz.co.uk on August 3, 2020, and has been reposted with permission.

“Road” at The Royal Court